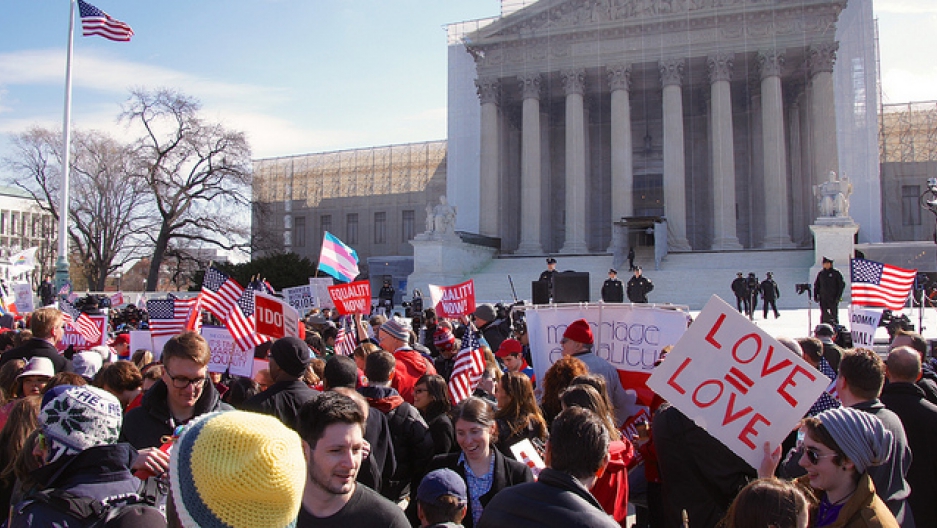 Protestors gathered in front of the Supreme Court in Washington D.C. (Photo by Ted Eytan via flickr).

The U.S. Supreme Court heard their second case this week regarding same-sex marriage on Wednesday.

United States v. Windsor was brought to determine the constitutionality of the Defense of Marriage Act (DOMA), which defines marriage between a man and a woman thus preventing legally married same-sex couples from collecting more than 1,000 federal benefits.

Emily Bazelon, lecturer at Yale Law School and senior editor of Slate, says that the central question in this case is whether gay couples that live in states that allow gay marriage should receive federal marriage benefits.

Paul Clement, the lawyer representing House Republican leadership who want to uphold the law, had a surprisingly weak argument, Bazelon says. Clement's central argument was that Congress tried to create uniformity when they passed the law to ensure that gay couples across the country were treated the same regardless of their states' marriage laws.

But Justice Elena Kagan appeared skeptical of the motivation behind the federal law, signed in 1996 by President Bill Clinton, when she read from a House of Representatives report that expressed "moral disapproval of gay couples.”

In arguing against the law, Justice Ruth Bader Ginsburg said that DOMA is not about making the law uniform across states, but instead has created two classes of marriage: "full marriage" and "skim milk marriage." One class receives full recognition and benefits while the other receives limited benefits.

Justice Anthony Kennedy, predicted to be the swing vote in the case, seemed skeptical of arguments in favor of upholding DOMA, Bazelon says. State rights and gay rights are connected in this case and Kennedy talked about whether or not the federal government has the authority to regulate marriage.

"Justice Kennedy's past affinity for the rights of gay people are really the decisive factors here," she says.

Yesterday’s hearing concerned Proposition 8, a voter-approved California ban on same-sex marriage. In that hearing, the Justices appeared cautious of making a broad ruling on same-sex marriage. The Washington Post reports that similar to the Proposition 8 case, the DOMA case has technical problems that the court will need to settle before it can get to the merits of dispute.