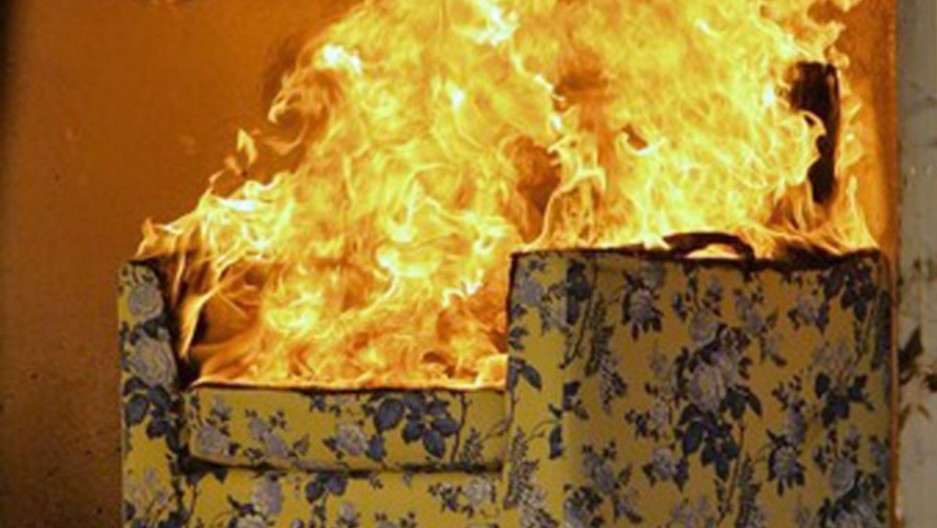 According to the Chicago Tribune, Big Tobacco is behind the proliferation of flame retardants packed into household products.

Flame retardants are a family of synthetic chemicals designed to help petroleum-based materials resist catching fire. Today, flame retardants are so ubiquitous they can be found in products ranging from textiles and upholstery, to strollers and traces were even discovered recently in some peanut butters.

According to the Tribune, having common household products loaded with flame retardants is a problem because increasing evidence has linked these chemicals to an array of damaging health effects including cancer, neurological defects and impaired fertility.

So what do tobacco lobbyists have to do with the proliferation of flame retardants in American products? Patricia Callahan, one of the reporters who developed the Tribune's investigative series "Playing With Fire," said tobacco lobbyists are at the heart of it all.

"Decades ago, cigarettes left smoldering were starting fires, and those fires were killing people, thousands of people every year," Callahan said. "And so there were calls as early as the 1920s to change cigarettes so that they'd go out on their own, but the cigarette industry didn't want to do that."

Callahan tracked the complex history of what happened next. She said the cigarette industry diverted attention away from the dangers of cigarette fires by recruiting trusted names in fire safety to emphasize the hazards of flammable furniture. They planted Peter Sparber, a former tobacco executive inside the National Association of State Fire Marshalls, where he provided talking points and agenda notes for the other members.

"It wasn't that they argued that cigarettes don't cause fires, they just argued that the better way to address the problem was to have flame retardant furniture," Callahan said.

Today, flame retardants in typical American homes can be measured in ounces and pounds.

"The first warning alarm about [flame retardants] was in the late 90s. A study out of Sweden unexpectedly found it in breast milk. And from there on out, people started finding it all over the place," Callahan said. "It's microscopically migrating from the products through dust. And in fact, toddlers, when you think about it, they play on the floor, they put things in their mouths, they have far higher levels of these chemicals in their bodies than adults do."

Advocates for the use of flame retardants have countered these concerns by pointing to a report from the 1980s saying flame retardants work well by slowing the rate of fires. Callahan tracked down the author of the study, Vytenis Babrauskas, to get his perspective.

"He said the way that flame retardants are used in household furniture is completely ineffective. By the time the flames get to the furniture, the fire just laughs at it."

According to Callahan, the tobacco and chemical industries have paid experts to vouch for the effectiveness of flame retardants. One such expert, David Heimbach, a retired doctor and the former president of the American Burn Association, gave testimony before lawmakers describing the deaths of children who lived in homes without flame retardant products. The problem with his testimony, Callahan said, was that it wasn't true.

"He testified in California and a number of other places and I noticed in the testimony that the details about the children had changed, but they'd all been burned in this horrible way by a candle," Callahan said. "When I looked into it, I found that the babies he described didn't exist. He later came back to us and said 'I deliberately changed facts about her case to protect her medical privacy.' But he changed the facts and he added new ones that worked to the advantage of the chemical industry that was paying him."

Another tactic used by the chemical industry is to frame the use of flame retardants as a civil rights issue.

"They argue that because poor minority children are more likely to die in fires, that if you take flame retardants away that young African American children are going to burn to death in fires," Callahan said. "And yet there was a study that showed that Black and Latino toddlers have significantly higher levels of these toxic flame retardants in their bodies than white children do. So the issue is, if the fire 'just laughs' at the flame retardants in furniture, how would they better protect any one race of children than another?"

Callahan said flame retardants are so prevalent in everyday products because of an obscure California regulation from 1975.

"Regulators in California were frustrated that so many of their residents were dying from cigarette fires, they tried to fireproof the world around the cigarette," Callahan said. "They did it by coming up with this regulation for furniture. The furniture that I'm sitting on in Chicago meets this California regulation. It's become kind of a de-facto standard for the nation."

Because of this law, California has become a focal point for environmentalists and healthcare organizations working to stem the flow of flame retardants into American homes.

But California isn't the only state receiving pressure on the issue. A bill has been introduced in New York to make the sale of children's toys containing a particular flame retardant illegal. And Sen. Dick Durbin, D-Ill., has asked the Environmental Protection Agency asking for tighter regulations on flame retardants.

"There is certainly big efforts afoot," Callahan said. "There was a rally in Washington, but so far it's really hard to tell whether it will go anywhere."