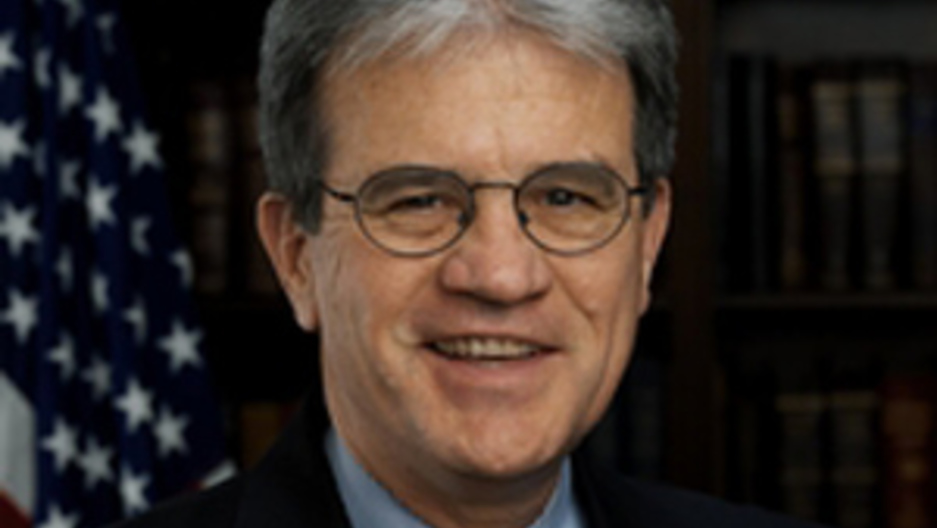 Use audio player to listen to a portion of Sen. Tom Coburn's remarks. Audio recorded by station KGOU/Norman, OK.

An Oklahoma town hall meeting with colorful characters and a lot of populist anger brought out an often glossed-over side of the ultra conservative Sen. Tom Coburn (R-OK): his sensibility.

After a woman in the audience railed against the possibility of being put in prison for not obtaining health insurance under the Democrat’s new law, Coburn dismissed her remark and questioned the accuracy of Fox News reports on health care reform.

"The intention is not to put any one in jail. That makes for good TV news on Fox but that isn’t the intention," Coburn responded.

Then, the Republican senator, who was an arch-foe of the Obama health care bill, defended the Speaker of the House Nancy Pelosi against character attacks.

While discussing his policy disagreements with Pelosi Coburn said "she’s a nice lady," which brought hisses and hoots from the crowd. But Coburn flatly rejected the crowd's animosity towards the liberal speaker.

"Come on now. She is nice -- how many of you all have met her? She’s a nice person," Coburn said as he went on to lecture the crowd about civility.

"Just because somebody disagrees with you dodn’t (sic) mean they’re not a good person," Coburn said. "I’ve been in the senate for five years and I’ve taken a lot of that, because I’ve been on the small side –- both in the Republican Party and the Democrat Party."

"What we have to have is make sure we have a debate in this country so that you can see what’s going on and make a determination yourself," Coburn added, and then again warned the crowd against the myths perpetrated on Fox News.

"So don’t catch yourself being biased by Fox News that somebody is no good. The people in Washington are good. They just don’t know what they don’t know," Coburn said.

Coburn has been lambasted lately for leading the Republican caucus in blocking a temporary extension of unemployment benefits, which expire this week. While standing up for Pelosi as a person, Coburn didn’t mince words about her policy positions.

He told the audience the blame for the impasse over unemployment benefits lies squarely with Pelosi, because she rejected a bi-partisan Senate compromise to pay for a two week extension.

"The speaker’s words back (to the Senate) is 'they don’t want to set a precedent that they have to pay for new spending,'" Coburn said to a laughing crowd. "That’s the truth. That’s the words. So I want to set that precedent."

Coburn closed the town hall by telling the crowd to read broadly and warned the mostly conservative audience about the danger of getting all their information from the same source.

"Listen to the other side, because what it does, it makes you a better person because now you see things in context from how other people might see it that are different from you."