The family’s new apartment is on the second floor of a mazelike, lower-income complex in a suburb of Sacramento, California.

It’s barely furnished, but bit by bit, it’s becoming home. A vacuum cleaner stands next to two donated mattresses, leaning against a wall.

“We haven’t gotten the beds yet. No worries. For now, we are managing.”

“We haven’t gotten the beds yet,” the father said. “No worries. For now, we are managing.” 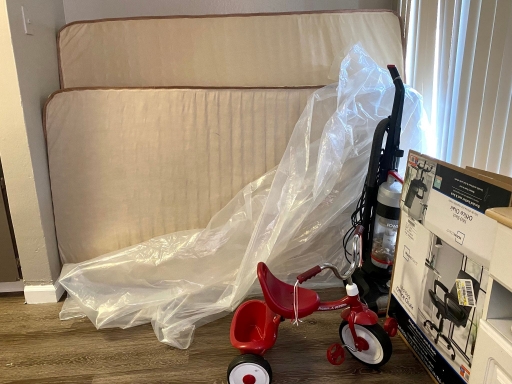 Donated mattress and a tricycle are among the items slowly arriving at a newly arrived Afghan family’s apartment in Sacramento, California.

Just days before Kabul fell to the Taliban, the family in Sacramento — mom and dad and their 2-year-old daughter and 5-year-old son — managed to fly out of Afghanistan after the father received a Special Immigrant Visa based on his work for the US military.

Because of ongoing threats by the Taliban against the family, they asked not to use their names.

Many of the newcomers helped the United States’ military and have applied for or received a Special Immigrant Visa (SIVs). The SIV program was created by Congress to allow local allies in Iraq and Afghanistan, who are threatened by groups like the Taliban, to resettle in the US.

Other arriving Afghans are part of a broader at-risk group — ranging from extended family members of SIV recipients to human rights activists — who can reportedly request humanitarian parole, a rapid way to temporarily enter the US with permission, an option used to evacuate people at the end of the Vietnam War.

Among the groups spearheading efforts to support Afghan refugees once they land in the US are refugee resettlement agencies and Afghan American groups.

“Our mission is to get you somewhere to live, get you enrolled in a jobs program, and get your first couple of months' rent and utilities paid,” said Vanassa Hamra, with World Relief Sacramento, part of a larger refugee resettlement agency.

That is often the path for many refugees resettled in the US: They receive federal help with housing, enrolling kids in school and finding work. Those benefits can run out, however, within a year, so having affordable rent is critical once refugees are on their own. 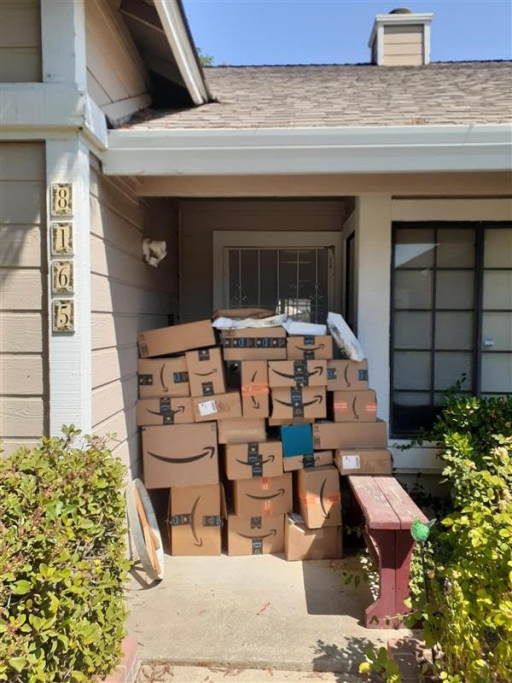 Boxes arrive at the door of a World Relief Sacramento employee. Donations are arriving quickly to the refugee resettlement agency. The boxes are filled with everything from kitchen supplies to bedding, items needed to help furnish newly arrived Afghan refugees’ homes.

It is also unclear how many Afghans the US will ultimately receive. Tens of thousands are en route or have just landed at US military bases. Many helped America’s military, but the US is also now evacuating a much larger group of at-risk Afghans.

Traditionally, resettlement groups have had far more time to prepare for newcomers. But not now.

Chances to help those hoping to join the evacuation are fading fast. More European allies and other nations were ending their airlifts Friday, in part to give the US time to wrap up its own operations and get 5,000 of its troops out by the Aug. 31 deadline.

In an emotional speech Thursday night, US President Joe Biden vowed to complete the evacuation and hunt down the ISIS militants responsible for the suicide attack on Thursday that killed well over 100 Afghans and 13 US service members. The group’s Afghanistan affiliate is far more radical than the Taliban fighters who seized power less than two weeks ago in a lightning blitz across the country.

The US warned more attacks could come ahead of Biden's fast-approaching deadline to withdraw American forces from Afghanistan by Tuesday.

The Taliban have said they will allow Afghans to leave via commercial flights after the US withdrawal, but it remains unclear which airlines would return to an airport controlled by the militants.

Many others will try to escape over land borders. The UN refugee agency said a half-million people or more could flee in a worst-case scenario in the coming months.

Related: How the Kabul airport went from calm to chaos

Untold numbers of Afghans, especially ones who had worked with the US and other Western countries, are now in hiding, fearing retaliation despite the group’s offer of full amnesty.

Like many other Afghans, the father in Sacramento waited several years for the visa. Already, the father said the Taliban have gone to their home in Kabul, perhaps looking for him.

“They came to our gate,” the father said. “They were knocking.”

He said his mom told the armed group there were no men inside and they went away.

Threats like that are keeping the couple awake at night in California. The mom, 27, is also worried about how life is changing for the women she knows back home.

“My sisters and friends can’t leave the house. They can’t go and walk to the bazaars.”

“My sisters and friends can’t leave the house,” she said, speaking Pashto. “They can’t go and walk to the bazaars.”

And she can’t reach out to her friends to see how they are doing because only a few people know she’s left Afghanistan.

“Only our immediate family knows that we are here,” she said, looking down and touching the Persian rug she’s sitting on. It’s deep red and elegant. 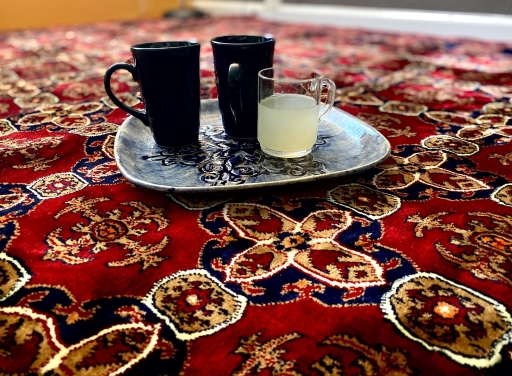 A newly arrived Afghan family, now in Sacramento, California, is slowly furnishing their apartment. A family friend, also from Afghanistan and now living in Sacramento, too, gave them a Persian rug.

It reminds her of home, she said. A family friend who also left Afghanistan a few years back and now lives in Sacramento bought them the rug and a TV.

One new prized possession: a slightly worn, steel pressure cooker. It’s tinier than the one the family had back in Afghanistan.

“In our culture, in our tradition, families are not three or six members. My family has 17 members,” the father said.

Back in Kabul, they all lived next to each other and ate communally.

Adjusting to family separations that may last years are among the many changes facing thousands of Afghans arriving in the US. Many will head to parts of the country with Afghan American communities, the largest in California, followed by Virginia, Texas, New York, Washington and Maryland, according to census figures.

Resettlement agencies across the country say that they must ramp up fast to meet refugees’ needs.

To hear more about The World's report on Aug. 27 about resettlement in the US, click the audio player below.

“This effort is very much building the plane as we're flying it,” said Krish O’Mara Vignarajah, who leads Lutheran Immigration and Refugee Service, a resettlement agency based in Baltimore, Maryland.

Vignarajah said it is unclear how many Afghans will ultimately arrive in the US in the coming months.

“Honestly, at this point, what we're going to be relying on are private donations, in-kind contributions, people who are willing to open up their homes to these individuals,” Vignarajah said.

Big donors and volunteers are key because refugee resettlement agencies are just barely recovering from the hits during the Trump administration, when the number of refugees allowed into the US was cut to historic lows.

“We can speak the language. We understand some of the cultural nuances, just the openness of just being Afghan and understanding those aspects.”

“We can speak the language. We understand some of the cultural nuances, just the openness of just being Afghan and understanding those aspects,” said Aisha Wahab, a city council member and interim mayor of Hayward, a city east of San Francisco and a major Afghan American hub.

Wahab is also among the first Afghan Americans elected to office in the US.

“Afghans have come to this country as refugees for nearly half a century,” Wahab said. “There's not a single Afghan generation that has been alive today that has not been affected by war directly or indirectly.”

She has been flooded with Afghan Americans offering to help, including people ready to make big commitments, such as Nurges Gheyaszada, a licensed mental health therapist who lives in the Bay Area.

She has taken a leave of absence from her job to help newly arriving Afghan refugees. Her family left Afghanistan in the late 1980s, when Gheyaszada was just an infant.

She hopes to meet families soon after they arrive and offer her services, “kind of treading lightly and not pushing it.”

She said that she wants to recognize the trauma people are experiencing and to know that “we are here to listen to you.”

Gheyaszada does worry that support for refugees will fade once Afghanistan is no longer the top news story.

“That's when the real fight starts, where we need to continue this momentum as Afghan Americans,” she said.

Hopes for the future

In Sacramento, the local Afghan community — those who have resettled here over the years and know how difficult these first days can be — has advice for the newly arrived family. 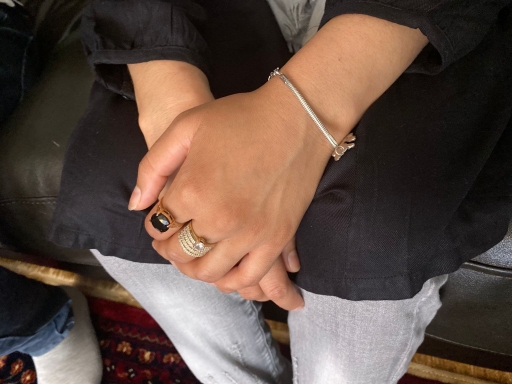 A newly arrived Afghan woman is now safe in the United States, after fleeing Afghanistan. Only her immediate relatives know she has left. Her husband worked with US military forces and she fears Taliban reprisals.

Local Afghans tell him: “Don’t be sad. You will be good in the future,” the father recalled. “You will have your own house. And all the things will be great.”

While the couple spoke, their two kids played. Their son pedaled a donated red tricycle down the short hallway. He will start kindergarten soon. His little sister watched an Afghan music video on her dad’s phone. That phone also has messages from her father’s former co-workers — who are now scrambling to leave Afghanistan themselves — trying to enter the Kabul airport.

The father thinks the US could have withdrawn from Afghanistan in a better way: “The US government could prevent this situation that is happening right now. It could be managed better.”

He also adds feeling guilty being in the US.

“I’m very lucky that I am here, safe. But sometimes, I think that I made a big mistake.”

“I’m very lucky that I am here, safe,” he said. “But sometimes, I think that I made a big mistake.”

“It would be better to be by their side, whatever happens.”

Then, he remembers how his life felt increasingly under threat as the Taliban gained power. He started switching up his route to work — to avoid being followed. He stopped seeing friends as much and quit exercising outdoors.

Here in California, they feel freer. In the evenings, the family goes for walks in a nearby park, also frequented by Afghan American families. The children run around, something they no longer felt safe doing back home.

“The life we were living, that was not life.”