For Jalil, a 37-year-old father of three, the urgency to leave Afghanistan has been there ever since he began receiving death threats from the Taliban for his work with the US Special Forces.

And, he has known other Afghans who have been murdered by the Taliban for the same work he once did.

Jalil, who asked to use his first name only, for security purposes, was an interpreter with the US Army Special Forces for nearly a decade.

Related: US biometric devices are in the hands of the Taliban. They could be used to target Afghans who helped coalition forces.

The long wait for a visa

For nearly two years, Jalil has been waiting for a visa, known as a Special Immigrant Visa, or SIV, for himself, his wife and his children. The SIV program was created by Congress to allow local allies in Iraq and Afghanistan, who are threatened by groups like the Taliban, to resettle in the US.

Just recently, Jalil’s visa was approved and US officials told him to head to the Kabul airport for an Aug. 17 flight. But then, last weekend, with the Taliban’s quick takeover of Kabul, and the exit of Afghanistan’s now-former president, Ashraf Ghani (he is currently in the United Arab Emirates), chaos ensued at the airport with thousands trying to leave the country.

Jalil said that a US official informed him that the seat on his flight had been canceled.

“They said they’ll plan another flight for me,” Jalil said.

Later, he said that he received a message from the US State Department saying that he would be allowed into the airport.

Related: 'If journalists leave a scene, it becomes a black hole,' VOA journalist in Kabul says

With despair setting in, Jalil and his family left their home together at predawn on Wednesday for the Kabul airport, joining thousands of other Afghans hoping to board an evacuation flight. The family spent hours with crowds near the airport, a scene that grew chaotic and led US troops to fire tear gas. But they couldn't make it through. 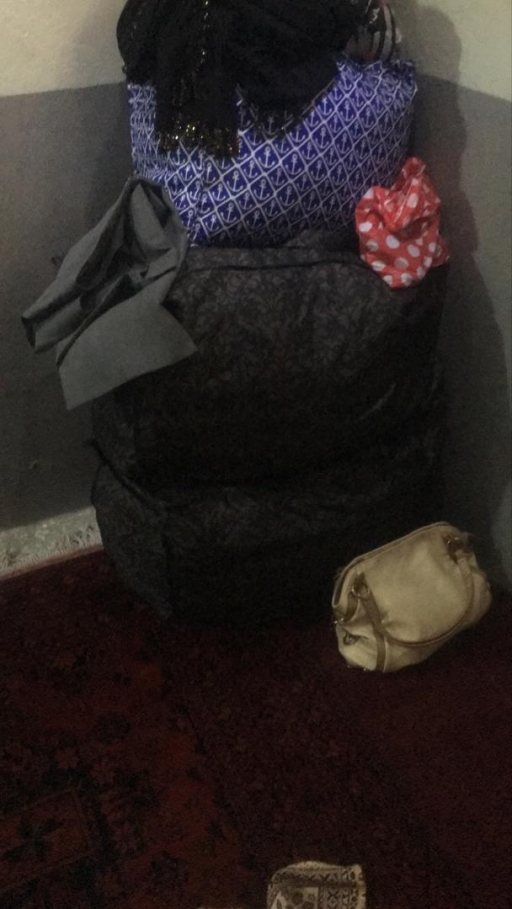 Jalil and his family have had their bags packed for weeks now, ready to board an evacuation flight from Kabul, Afghanistan.

Eventually, Jalil and his family decided to return home but were intersected along the way by Taliban fighters. Jalil said he was beaten with a cable wire while holding his youngest son. He now awaits a chance to make another try for the airport, his gateway to safety.

'I'll do anything for him'

Meanwhile, stories are circulating of the Taliban raiding the homes of people who had supported the US, and of beating suspected traitors.

That's why, when Jalil saw that Taliban control in Kabul was imminent, he immediately went into hiding.

“I had to leave my house and send my wife and kids to my in-law’s house to be safe there,” he said.

He traveled to another relative’s house and kept watch on her rooftop. Jalil is an expert lookout.

On the rare occasion Jalil goes outside, he ditches his usual clothes.

“I normally wear cargo pants, jeans, with T-shirts,” he said.

Now, he dons more traditional Afghan clothing — loose pants, a vest and sandals — to blend in.

He said he is well aware of the dangers that Jalil faces and has stepped up his efforts to make sure he won’t be left behind.

“I’ll do anything for him,” Smyth said.

“He gave up so much and was so brave fighting side by side with me and my team. He’s a teammate.”

“He gave up so much and was so brave fighting side by side with me and my team. He’s a teammate.”

Smyth is trying to remain optimistic, hoping that the US-led mass evacuation plan will continue. But he is also angry and disappointed that the US has ignored warnings for years that the slow processing of SIVs could risk lives.

US officials say they are doing their best to evacuate as many people from Afghanistan as they can, including US citizens and Afghan allies. In recent weeks, about 2,000 Afghan SIV applicants have been flown out of the country, a sharp increase from previous months.

But the relatively recent stepped-up effort has only accounted for a slice of the estimated 85,000 visa applicants and their families hoping to leave.

Related: An Afghan American scholar describes his fear-filled journey from the chaos at Kabul airport to a plane bound for home in the US

“It is our intention to bring to the United States as many SIV applicants as we possibly can,” Pentagon spokesman John Kirby told reporters this week.

‘In desperate need of security and protection’

That Jalil waited nearly two years for his visa is not unusual — despite the fact that the State Department, which oversees the SIV program, is required to complete the visa process within nine months. In practice, it can take far longer than that, spanning years. There are several reasons why, ranging from staff shortages and a lack of coordination among government agencies to a complex, 14-step process.

Groups like the New York-based International Refugee Assistance Project have sued the US government over the waits, arguing that the visa system is failing to serve people in Afghanistan who served with US forces and face real danger.

Some SIV applicants have managed to get on planes this week. Yet, many worry that the window to get out will close, especially if the Taliban decide to block Afghans from leaving.

Julie Kornfeld is a senior staff attorney at the International Refugee Assistance Project, which helps Afghans seeking visas. She is concerned about Afghans at risk in Kabul and in remote provinces, where the Taliban can rule away from the media spotlight. Getting to the capital, where evacuations are underway, requires traveling long stretches of highway controlled by Taliban checkpoints.

“There are hundreds of thousands of Afghans that live outside of Kabul and that are in desperate need of protection and security,” Kornfeld said.

One of the Afghan SIV clients she worked with, she said, did figure out a way to Kabul. He rented a taxi ambulance, betting that might thwart a diligent search by the Taliban if they were stopped. They also had good cover.

“His wife is currently 35 weeks pregnant, and they hid all the documents in his wife's clothes.”

“His wife is currently 35 weeks pregnant, and they hid all the documents in his wife's clothes,” Kornfeld said.

In Kabul, Jalil is desperate for good news. But he is also a dad and has been trying to keep his little kids calm, playing hide-and-seek while continuing to seek out an exit plan.

The family is also running out of cash. Just before the Taliban takeover, Jalil was a security guard at the Finnish Embassy. Now, the Embassy has closed and its staff has evacuated.

He is seeing Taliban fighters in pick-ups outside his window, “patrolling everywhere, on the rangers, motorcycles, carrying weapons.”

“We cannot trust anybody,” he said.