In the “Just Say No” era, Thai cops and American DEA agents would team up to hunt marijuana smugglers with guns drawn.

“US drug addicts” once cherished Thai weed so much that they’d pay triple the price of Mexico pot, so say US government reports from the mid-1980s.

The marijuana pipeline from Southeast Asia to the US later withered away — but the American lock-’em-up mindset has lingered. Thailand remains one of the US-led global drug war’s top allies.

But attitudes are changing fast. The Thai government, following the lead of US states, is rethinking its hard-line laws against cannabis. This shift isn’t just affecting prisons and courtrooms. It’s also influencing cuisine — and the effects have reached a restaurant called Baan Lao Ruang (The Storytelling House). 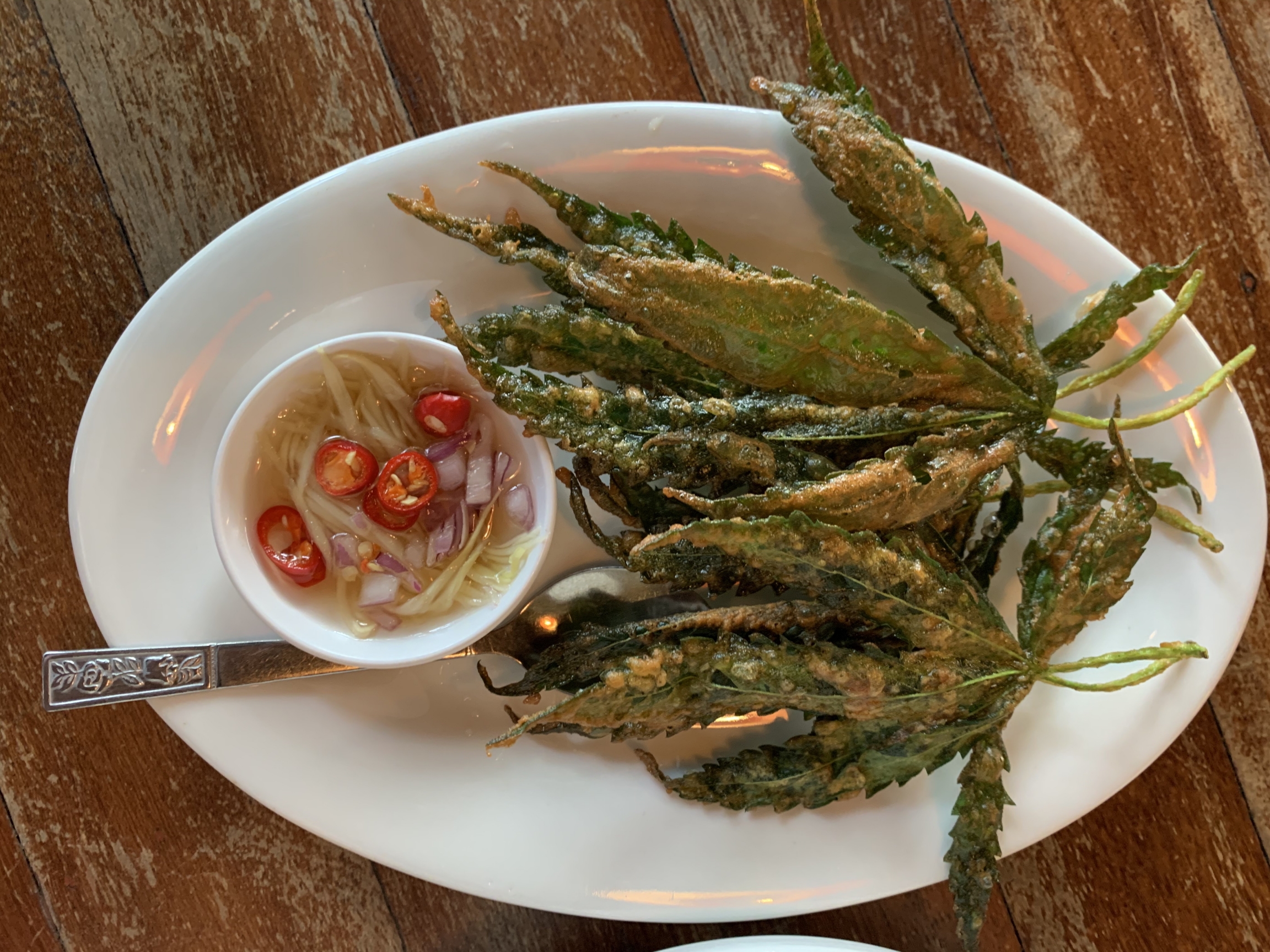 It’s a homey little spot in a rural province, a two-hour drive from Bangkok. Its proprietor is chef Amara Akamanon. She’s a jovial woman in her early 60s who likes baking cookies and exudes wholesome vibes.

Yet, practically every dish coming out of her kitchen is seasoned with what was, before 2021, a “class-five” narcotic. The official Thai word for cannabis is ganja and Amara’s food is full of it. She does stir-fries, rich curries, tom yum (a classic Thai sour soup) and even tempura-fried cannabis leaves.

Does it get you zonked?

“You might feel uplifted by my food. Your mood might improve. Maybe you’ll get the giggles. You will relax, sleeping better that night.”

“You might feel uplifted by my food,” she said. “Your mood might improve. Maybe you’ll get the giggles. You will relax, sleeping better that night.” 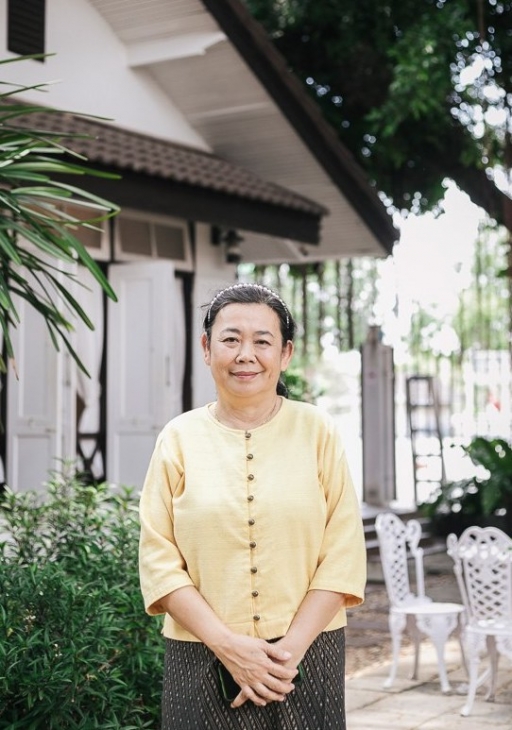 Or you might not feel much at all. Amara only cooks with cannabis leaves, which have very little THC. (The high-inducing chemical is concentrated in the flower or bud.) Catching a little buzz is nice, she said, but what really intrigues her is the plant’s taste.

Related: Does Thailand have a monkey labor problem?

Munching cannabis leaves is like eating wheatgrass — earthy, not too pleasant — but when the leaves or stems are minced and added to food, it brings out the umami. Difficult to explain (especially in English), umami is the fifth flavor after sweet, salty, bitter and sour. The word “savory” sort of conveys umami — think of the eyes-rolling-back goodness brought on by bacon, parmesan cheese or a garlicky marinara sauce.

All of those foods are high in glutamic acid, the chemical key that unlocks umami’s magic. Cooks can summon umami with MSG (monosodium glutamate) powder. Or, Amara said, they can add cannabis leaves, an organic source of glutamic acid.

“We don’t use any MSG in this restaurant,” she said. “Only ganja. My customers tell me it makes everything taste better.”

Her customers skew older: families, uncles and aunties, grandmas downing spoonfuls of pork curry. The restaurant — wooden tables, lots of natural light — is about as far from a stoner den as you could imagine.

Nor does Amara come off as someone on the bleeding edge of drug reform. Even in her younger days, Amara said, she never had any sneaky puffs of marijuana.

“No way,” she said. “I was a proper lady. I heard about some of the boys trying it but not me.”

Amara still is a proper lady, of course. It is the world around her that has changed.

Recreationally smoking marijuana buds is still illegal in Thailand (for now) but, since 2019, Thai doctors have been allowed to prescribe cannabis oil that contains THC. It’s not hard to get. Government hospitals give out the oil to remedy ailments ranging from chemotherapy side effects to sleeplessness.

“I never thought the law would change like this. I used to see ganja as illegal stuff no one should mess with. But more recently, Thai researchers have been allowed to ask, ‘Can this help people?’”

“I never thought the law would change like this,” said Dr. Waleerat Kraikosol, with Thailand’s top herbal medicine institute, Chao Phraya Abhaibhubejhr. “I used to see ganja as illegal stuff no one should mess with. But more recently, Thai researchers have been allowed to ask, ‘Can this help people?’”

In decades past, cannabis was doled out by village herbal medicine doctors — and cooks would even sprinkle it into certain dishes. Vendors of “boat noodles” (a salty, porky dish sold on roadsides) would infamously slip cannabis leaves into their broth, Waleerat said.

Related: One Thai island’s bold scheme to bring back tourists

Then, a DEA-inspired pot crackdown came to Thailand in the 1980s, helping push cannabis cuisine into the shadows. Thai researchers such as Waleerat are helping reverse this draconian mindset by touting the positive effects of cannabis.

“Everyone focuses on the bud of the plant but the leaves and stems also have interesting qualities,” she said, citing antioxidant and anti-inflammatory properties. “Thai culture is also all about cuisine — the beauty of food, bringing out its flavors. That’s a benefit, too.”

Whether MSG is actually harmful is debated among doctors but Waleerat said, in her opinion, cannabis leaves are a superior choice for bringing on umami bliss.

One of Amara’s signature dishes — an oniony pork rib stew — is an umami explosion.

“Maybe you won’t feel much after eating this, but it definitely tastes good and you’ll sleep good tonight.”

“Maybe you won’t feel much after eating this,” she said, “but it definitely tastes good and you’ll sleep good tonight.”

Other Thai eateries are also experimenting with using cannabis leaves as a taste enhancer; Baan Lao Ruang got early permission from the government because it is affiliated with a hospital focused on herbal medicine. (Amara also happens to be a former nurse.) But the trend is sure to grow — and Amara is proud to be on the vanguard of this legal toe-dip into recreational marijuana.

Cannabis in Thailand has gone from “medicine to some terrible narcotic and back to medicine again,” Amara said, and she welcomes society’s return to common sense.