Acharawadee Wongsakon, an ascetic Buddhist teacher in snow-white robes, has a pet peeve.

It’s the phrase “let it go,” deployed by people who disrespect Buddha and expect Buddhists to meekly tolerate the insult.

“Letting go? That just means letting go of your emotions. It doesn’t mean we’re weak … or that we won’t stand up for our rights.”

“Letting go? That just means letting go of your emotions,” Acharawadee said. “It doesn’t mean we’re weak … or that we won’t stand up for our rights.”

Acharawadee is the driving force behind the Knowing Buddha Organization, a watchdog group based in Thailand. Once a high-flying businesswoman in the jewelry trade, she has since dedicated her life to meditation — and claims to have logged 18,000 hours in her lifetime.

Related: Does Thailand have a monkey labor problem?

As the leader of the Knowing Buddha Organization, she oversees volunteers who scour the internet and chase tips, seeking out people who have used Buddha’s image flagrantly.

A prime example: placing statues of Buddha’s head on the floor — a lowly place — or, worse yet, putting Buddha imagery on things that are stepped on, like skateboards or carpets. Buddha’s resplendent image, they say, should never come near a person’s grubby feet.

Also on the offenders’ list: bars and hotels using Buddha as a kitschy decoration, especially in ignoble, boozy places — such as nightclubs — or plastering his face on walls to give off faux spiritual vibes.

Then, there are the Buddha toilet seat covers, sold online. Or the Disney cartoon, “Air Buddies,” featuring a meditating puppy named Buddha.

“Buddha taught goodness, dedicating his life to ending suffering. The same way Jesus did … and you treat him this way?” Acharawadee said.

“If anything touches Mohammed or Jesus, [people know] they’ll be in deep trouble. But if they touch Buddhism, the Buddhists hardly have a voice to stop them — so, people think they can do anything they want.”

“If anything touches Mohammed or Jesus, [people know] they’ll be in deep trouble,” she said. “But if they touch Buddhism, the Buddhists hardly have a voice to stop them — so, people think they can do anything they want.”

There are roughly half a billion Buddhists in the world. Yet, the influence of this religion — some would call it a philosophy — radiates beyond its base of adherents in Asia. Meditation and mindfulness, en vogue in the West, inadvertently spread a certain Buddhist chic — one that is disconnected from mores in the Asian cultures that uphold Buddhism.

These are cultures, Acharawadee says, that recoil at seeing Buddha adjacent to feet or, worse yet, a decorative flower pot made from Buddha’s head. Tattoos are also forbidden, she said, because “Buddha is a symbol of purity and the human body is dirty … especially when humans have sex.” 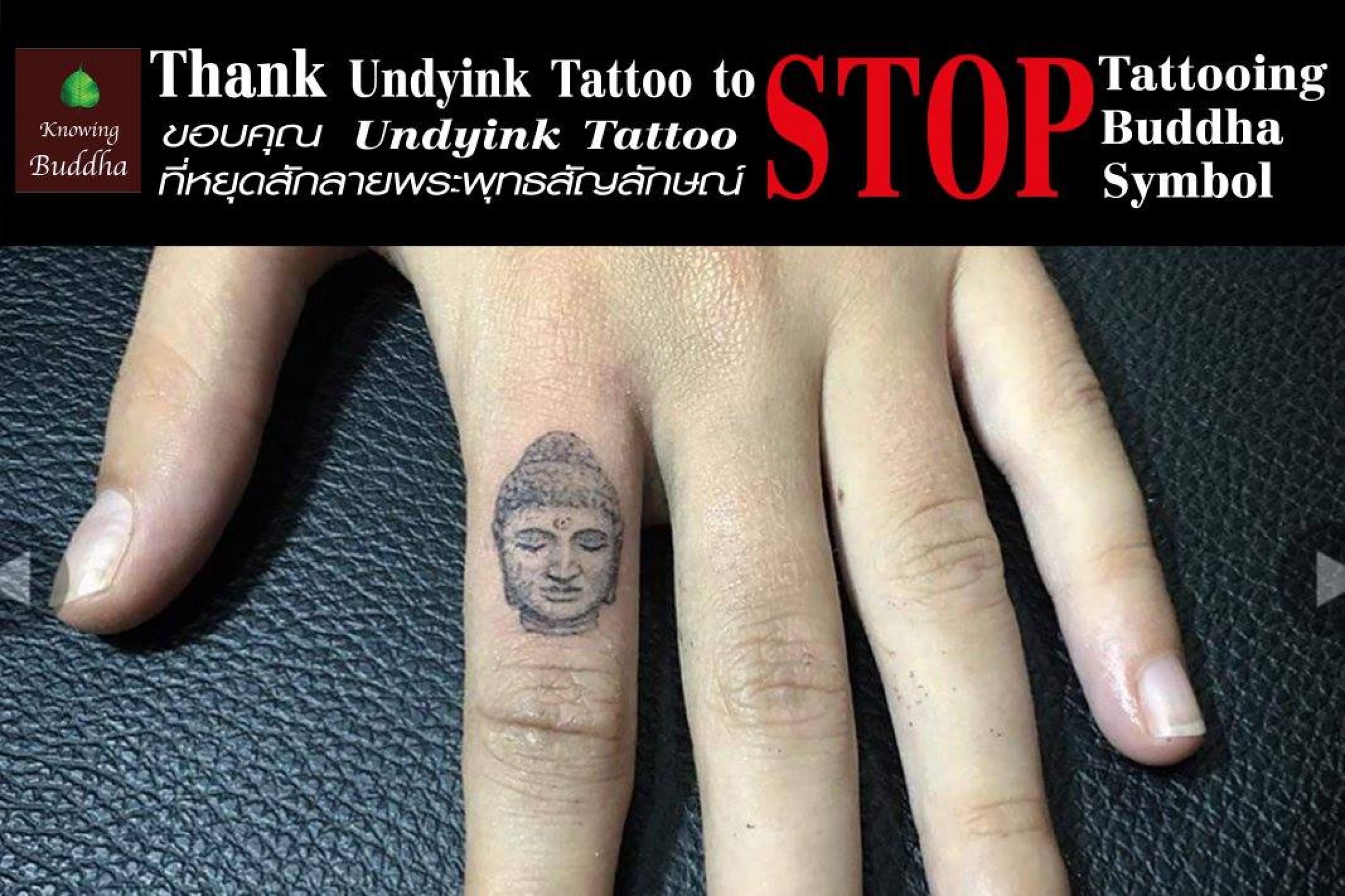 The Knowing Buddha Organization in Thailand tries to raise awareness, including through ads, about the proper treatment of Buddha's image.

Courtesy of the Knowing Buddha Organization

“Buddha is just not some superstar.”

“Buddha is just not some superstar,” Acharawadee said.

Just because Buddha is not a deity — he was a spiritual leader, alive in modern-day India or Nepal roughly 2,500 years ago — does not mean “you can use him as a decoration. Show respect. He is the father of our religion.”

Related: In Thailand, posting a selfie with a beer is a potential crime

Those who offend the Knowing Buddha Organization are contacted and warned. Many offenders, Acharawadee says, act out of ignorance, not malice.

“We ask them to stop, explaining the problem. I must say, about 50% stop what they are doing. The other 50% don’t care.”

If a transgression takes place outside Thailand, the Knowing Buddha Organization may ask the local Thai Embassy to apply pressure — which has sometimes worked. 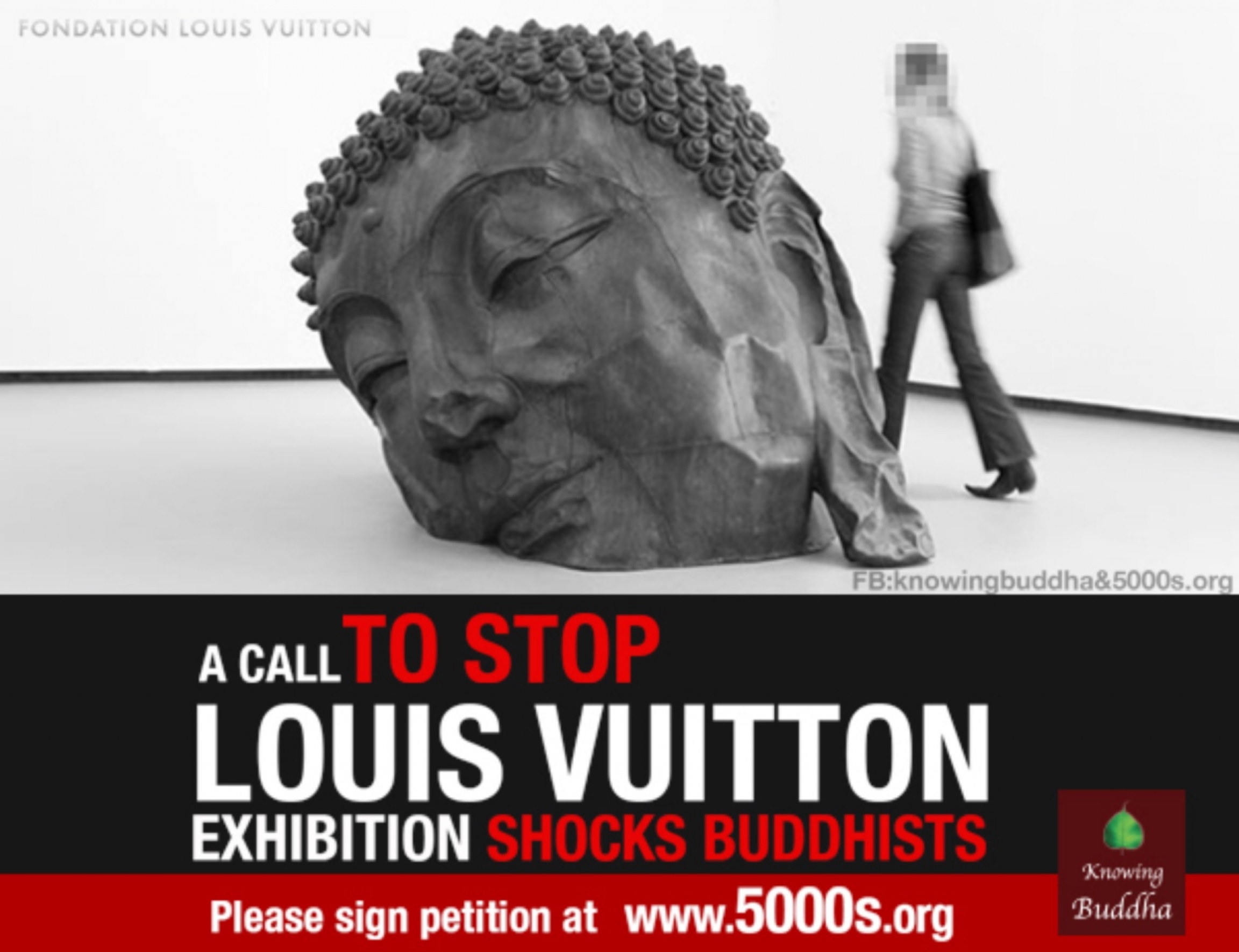 This ad is from the Knowing Buddha Organization, which advocates for respectful presentations of Buddha around the world.

Courtesy of the Knowing Buddha Organization

Among the organization’s bigger takedowns was a Paris art exhibit, hosted by the Louis Vuitton Foundation in 2016, which featured a massive Buddha head resting on the ground. Under pressure (which included a letter from Thailand’s Embassy in France), the head was placed on a pedestal.

But would Buddha himself — imparting teachings against pride — dwell on transgressions such as this? Or might he, well, let it go?

“If someone puts trash in front of your door,” Acharawadee said, “will you let it go? No, you will remove the trash as best you can, without feeling hatred, always feeling harmony and forgiveness.”

“Otherwise,” she said, “using the theory of letting go with everything, we would not have law and order.”

For those who offend Buddhists inside Thailand, a Buddhist-majority country, the Knowing Buddha Organization advocates a more strict punishment. There are Thai laws against disrespecting religion but they are seldom enforced — and Acharawadee has advocated for a strengthening of these codes, even addressing Thailand’s Senate.

In her view, foreign offenders — this could include a tourist with a Buddha tattoo or people posing in bikinis by a Buddha statue — just be let off with a warning, possibly a fine if they are recalcitrant.

“But if the person is Buddhist, they should go to jail. Maybe for six months. If you go to jail, it’s not about punishment. It’s giving you time and space to really contemplate what you did wrong.”

“But if the person is Buddhist, they should go to jail,” she said. “Maybe for six months. If you go to jail, it’s not about punishment. It’s giving you time and space to really contemplate what you did wrong.”

Other Buddhist-majority countries enforce anti-blasphemy laws. Sri Lanka deported a British woman over a Buddha tattoo on her arm. In Myanmar, a New Zealander and two citizens were imprisoned over an online flier promoting a bar; the image depicted Buddha wearing headphones.

Such cases have not arisen in Thailand — perhaps because the country, deeply reliant on tourism for its economy, cannot risk scaring off travelers. The Knowing Buddha Organization has posted billboards near Bangkok’s largest airport, warning incoming tourists that it is “wrong” to wear Buddhist necklaces or sport Buddha tattoos.

“The purpose is just to raise awareness to foreigners,” Acharawadee said.

Her advice for anyone already sporting a Buddha tattoo — and looking forward to visiting Thailand?

“You should erase it,” she said. “It will be good for you. If they will not, whatever consequence that might come — they might have to accept it.”