Peru is set for a divisive presidential runoff between a socialist elementary schoolteacher from the rural Andean mountains, and the conservative heir to the powerful and controversial Fujimori dynasty.

Pedro Castillo, a 51-year-old teacher and union leader, and Keiko Fujimori, the 45-year-old daughter of former President Alberto Fujimori, surprised much of the country when they took the first two positions in a crowded first round of voting this past Sunday.

Related: Honduras and other countries at the ‘back of the line’ in global vaccine distribution

Castillo got 19% of the vote while Fujimori got 13%, according to Peru’s national electoral office. They had both failed to break from the pack of 18 candidates in earlier polling.

The two will go head-to-head in a second round of voting on June 6, with a majority of voters disappointed in their options. Almost 70% of voters picked a different candidate or left their ballots blank. Some quote Nobel Prize laureate for literature Mario Vargas Llosa, who in the 2011 presidential race, compared voters’ options to a choice “between cancer and AIDS.”

“We’re living in a horror movie.”

“We’re living in a horror movie,” said Alonso Cárdenas, a political analyst and lecturer at the Catholic University of Peru in Lima.

Castillo spoke from a balcony in his hometown of Tacabamba, a hamlet in the Andean region of Cajamarca, on Sunday night, saying he’d won with the support of voters in rural Peru, which had been ignored by politicians in the capital of Lima.

“We’ve gotten by on nothing but grilled sweet potatoes,” said Castillo, who spoke with no podium or microphone, just a face mask and a farmer’s hat.

Indeed, many of Castillo’s supporters identify with him, said Deivy de la Cruz, a radio host in the region of Cajamarca.

“There’s a lot of joy here. People are saying that they’re going to vote for a candidate who is just like them.”

“There’s a lot of joy here,” de la Cruz said. “People are saying that they’re going to vote for a candidate who is just like them.”

Four years ago, Castillo made a name for himself as the leader of a teacher’s strike.

He has been compared by critics to leftist leaders, such as Hugo Chávez of Venezuela and Fidel Castro of Cuba. Castillo has said he wants to nationalize the country’s national resources to pay for better health care and schools and is proposing rewriting the country’s constitution.

Meanwhile, Keiko Fujimori spoke on Sunday night in a brightly-lit room in the capital, Lima. She sought to rally the support of candidates she defeated, whom she said supported free markets and the constitution, which her father Alberto Fujimori approved as president in 1993.

Related: Mexico’s COVID-19 wards are full. Many patients who can’t get oxygen die at home.

“More than the differences, we have great things in common,” Keiko Fujimori said.

Keiko Fujimori, who is making her third run for president, advanced to the runoff despite serious corruption accusations and having briefly been jailed. She is also currently under investigation. Her father, who held office from 1990 to 2000, was convicted of gross human rights violations during his presidency. 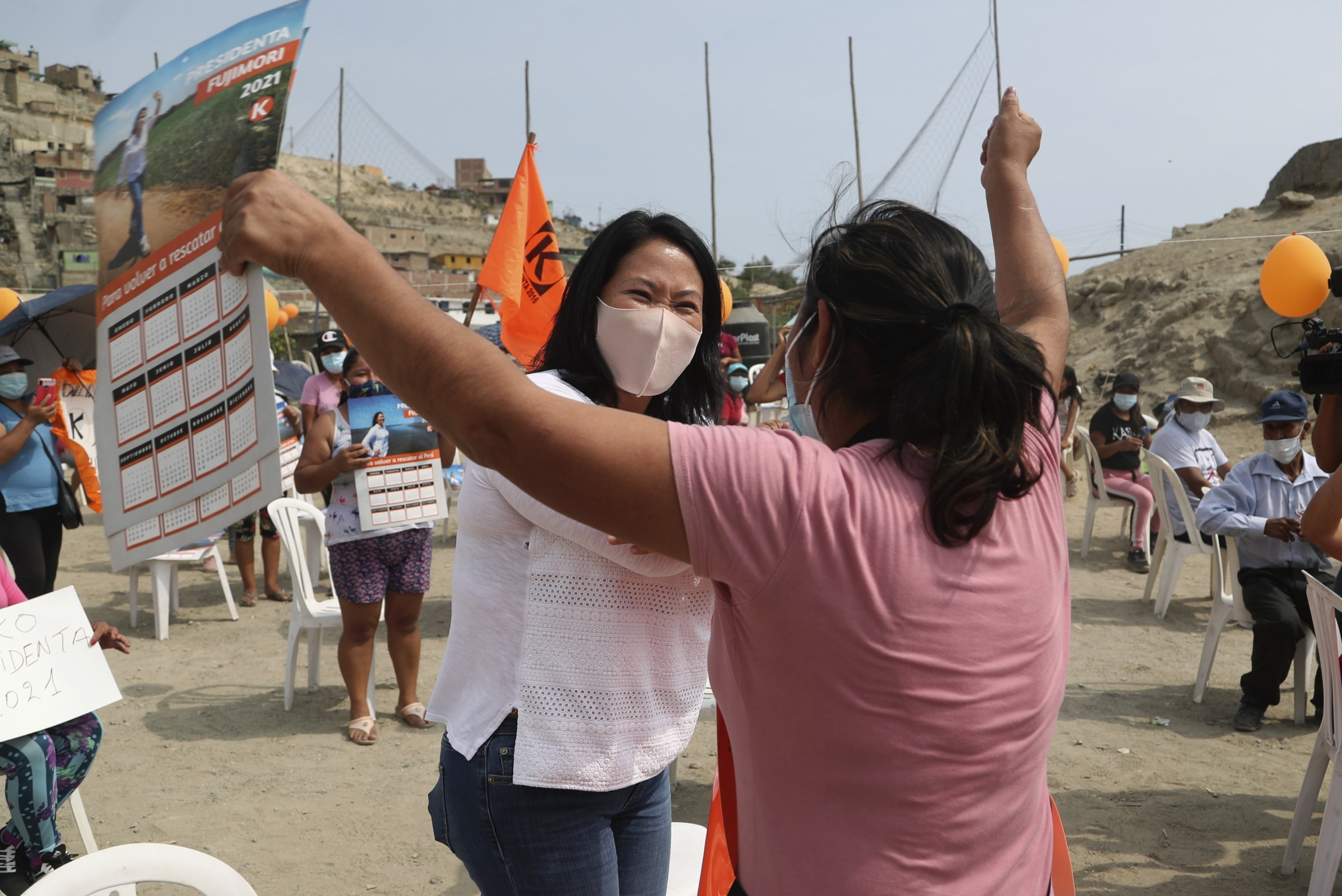 Wearing a mask to curb the spread of the new coronavirus, presidential candidate and daughter of imprisoned ex-President Alberto Fujimori, Keiko Fujimori, of the Popular Force party, greets a supporter as she campaigns in San Juan de Lurigancho on the outskirts of Lima, Peru, Tuesday, March 16, 2021.

Cárdenas said that Keiko Fukimori has promised a heavy hand against crime and a pro-business administration.

Many of her supporters likely feel nostalgia for a period in which her father ended conflict with domestic terrorist groups and ushered the country toward economic growth, Cárdenas said.

“They are always remembering former President Fujimori,” he said. “They are big fans of his government.”

Many Peruvians are unhappy with their two choices. The country’s political landscape shows chaos and instability, said Olga González, a Peruvian anthropologist and associate dean of the Kofi Annan Institute for Global Citizenship at Macalester College in Minnesota.

Framing the race simply as rich versus poor, or urban versus rural, leaves out nuances, she said. For example, neither candidate supports same-sex marriage or abortion rights.

“These kind[s] of binaries can be problematic, but they do speak to how polarized the country is.”

“These kind[s] of binaries can be problematic, but they do speak to how polarized the country is,” González said.

Right now, Keiko Fujimori and Castillo are making deals with groups that they defeated in the first round in the hopes of cobbling together enough support to be the first across the finish line this June.