Daniela Trejo Rodriguez took time off from her job as a phone customer service representative on a recent Thursday to get oxygen for her 60-year-old father, who was diagnosed with the coronavirus.

She waited in a long line at an oxygen distribution warehouse near downtown Mexico City to refill two tanks. But it wasn’t enough. Three days later, her father suffered respiratory failure — a fatal symptom of the disease — and died.

Tejo Rodriguez said she wouldn't wish any of this on anyone, and she hopes people will wear masks and practice social distancing.

“I hope they never have a relative get sick because it’s a really awful situation.”

“I hope they never have a relative get sick because it’s a really awful situation,” she said.

In many cities across Latin America, including Mexico City, patients with the coronavirus are struggling to receive vital medical oxygen to stay alive. Many who couldn’t find space in overflowing emergency rooms are dying at home.

In Mexico, which has the third-highest COVID-19 death rate on the planet, government officials are begging private citizens who are hoarding unused tanks to turn them in. Thieves have stolen tanks from delivery trucks and hospitals. And the market and black-market price for oxygen is sky-high, with retailers recently asking for $1,000 per tank — almost 150 times the country’s daily minimum wage, according to a Reuters report.

All five members of Trejo Rodriguez’s family — her parents and two siblings — had tested positive for the coronavirus after showing symptoms in January, but her father was the only one who, after two weeks, had not recovered.

Trejo Rodriguez said her father earned a living taking care of cars on the street for tips and worked until he got sick.

Her family became concerned once her father’s blood oxygen level fell below 89%, then below 81%, then lower, she said. The recommendation is to seek medical assistance for anything below 90%.

When the family called an ambulance, they were told all public hospitals were virtually full, she said. That’s when they decided to keep her father at home. Extended family members found two oxygen canisters for the family to borrow and two more to rent. 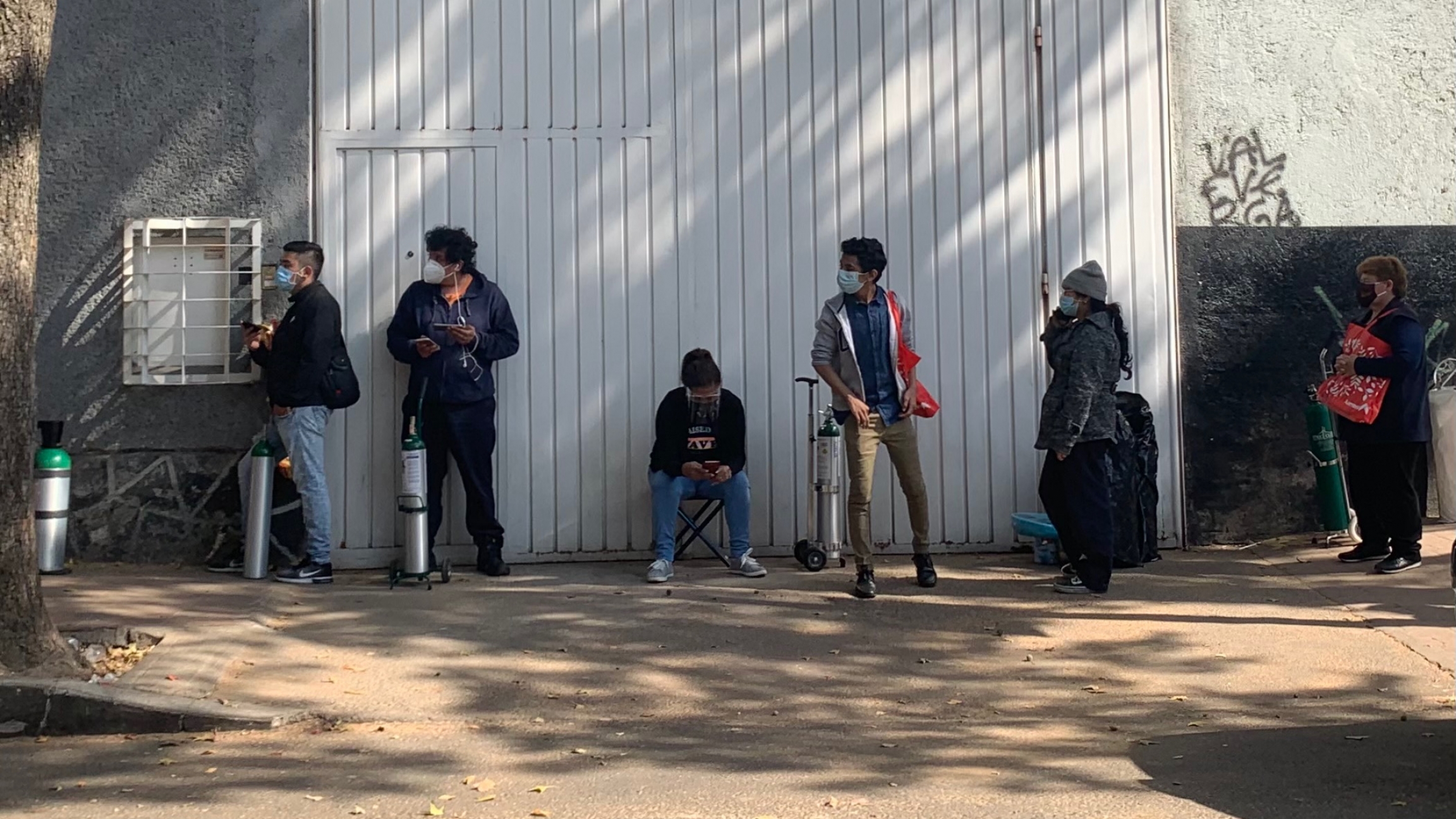 But getting oxygen isn’t easy.

Related: The winding journey to reunite families separated at the US border

Day or night, there are as many as 80 people in line at the warehouse where Trejo Rodriguez waited over two hours on a recent Thursday. And, it’s similar or worse at four government-run sites as well as the few dozen operated by private companies in Mexico City, where more than 20 million people live.

Karla Dominguez was in the same line as Trejo Rodriguez at the downtown-area warehouse that day. She was looking for an oxygen tank for her husband’s uncle. Other family members had also fanned out across the city with no success. She lamented the price-gouging and thefts that have become more common as a result of the scarcity.

“I don’t wish any ill on anyone, but what comes around goes around.”

“I don’t wish any ill on anyone, but what comes around goes around,” Dominguez said.

Toward the back of the line, Alejandro Amaro waited to refill two canisters. Amaro’s brother and father had tested positive for COVID-19, but it was his 82-year-old mother who needed the oxygen, he said.

Related: Why Biden’s day one promise to end ‘Remain in Mexico’ program may go unfilled

He said his mother had needed three refills per day over the previous week, so he and other family members were taking turns visiting the medical oxygen facility. He said he had already stood in line 15 to 20 times himself.

“We have to keep fighting,” Amaro said.