On a recent winter afternoon, Phillip Naderer-Puiu and his partner picked up their 4-year-old daughter from day care in aspern Seestadt, a new community focused on green living on the edge of Vienna.

Naderer-Puiu was one of the first residents when he moved there in 2015. He loves the sense of community.

“It’s very open,” he said. “You know a lot of people here. It's not hard to find new friends.”

Aspern Seestadt is nearly net-zero, meaning that its modern high-rises produce almost as much energy as they use. Globally, buildings make up around 40% of greenhouse gas emissions, but aspern Seestadt demonstrates that it doesn’t have to be that way.

The development — home to various industries, researchers and small businesses — demonstrates the possibilities for building an entirely green mini-city.

From their apartment, Naderer-Puiu’s family can easily walk to the store, school, restaurants, parks, dentist, doctors, a lake and the subway. They can ride bikes to the local bookstore down streets lined with high-rise apartments and a wide sidewalk.

When their daughter Dora zooms ahead on a little yellow bike, Naderer-Puiu doesn’t stress because this community was designed to prioritize safety for pedestrians and cyclists.

“You can just ride for half an hour with just one street you have to cross,” Naderer-Puiu said, adding that it's relaxing for anxious parents of toddlers.

Related: Enormous wind turbines may be coming to a coast near you 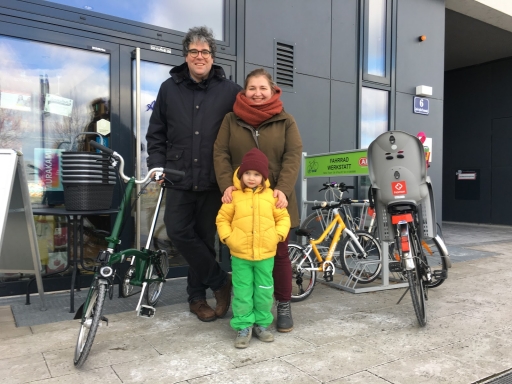 Like most residents of aspern Seestadt, the Nader-Puiu family don’t own a car and get around by walking, biking, or the subway.

This is all by design. From the beginning, the city of Vienna wanted this development to be a place where green urban planning and research could be tested — and then exported.

Ingrid Spörk, who works for Wien 3420, the company developing aspern Seestadt, said the subway was extended to the area when it was still just a patch of dirt.

“The city of Vienna decided to build a metro line before they built anything else,” Spörk said. “So, even the construction workers came for the daily job with the metro line.”

The idea is to discourage cars and make it easy to walk. Parking fees fund things like free-access cargo bikes and free grocery trolleys for residents. Spörk said planners made sure there is a good mix of retail, groceries and doctors’ offices all within walking distance.

Related: In landmark decision, Denmark will phase out oil and gas by 2050. Here's how.

Aspern Seestadt currently has about 8,000 residents, but will eventually hit 25,000 residents nestled into dense, urban neighborhoods. The site itself is a former airfield.

“This is an exceptional opportunity. ... Because you don't always have, in such a dense city like the city of Vienna, the opportunity to actually build a new development completely from scratch."

“This is an exceptional opportunity,” said Doris Österreicher, a researcher at the University of Natural Resources and Life Sciences in Vienna. “Because you don't always have, in such a dense city like the city of Vienna, the opportunity to actually build a new development completely from scratch,” she said.

Sustainability projects piloted in aspern Seestadt have been implemented in other Austrian cities and beyond.

A cargo bike parcel delivery system was expanded to the cities of Linz and Salzburg. A rainwater management system designed to minimize water waste was first tested here. And the district is currently piloting Vienna’s first self-driving bus.

“Aspern was always conceived as the sort of new development, as the sort of innovative area where things can be tested out,” Österreicher said. She pointed out that other communities are really paying particular attention to the energy sharing that happens here.

“That means using excess heat or excess electricity that is generated from one building to be used in another building.”

For example, the elementary school’s solar panels generate electricity that can be used in the apartment building next door.

“And if we use that on a large scale, then this becomes a very efficient system to reduce greenhouse gas emissions in cities,” Österreicher said.

It sounds simple in one sense, but there’s a lot of planning required to make it possible.

Robert Grüneis, who heads up an energy research firm called Aspern Smart City Research, showcases a “smart” office building with solar panels on the roof and heat pumps in the basement. The building also has retail space and a second-floor garage where he parks his electric vehicle.

Grüneis explained that these systems are connected: Before he drives to work every day, he uses an application on his phone to reserve a charging dock for his electric car.

“So, the system knows, Robert is coming. He wants to charge his car,” Grüneis said.

Aspern Seestadt developers say that it's replicable programs like these that make the community so unique: It's an urban lab for Vienna, but also for smarter, greener cities all over.

Now, aspern Seestadt has a formal agreement with São Carlos, in Brazil, to share energy efficiency research and more.