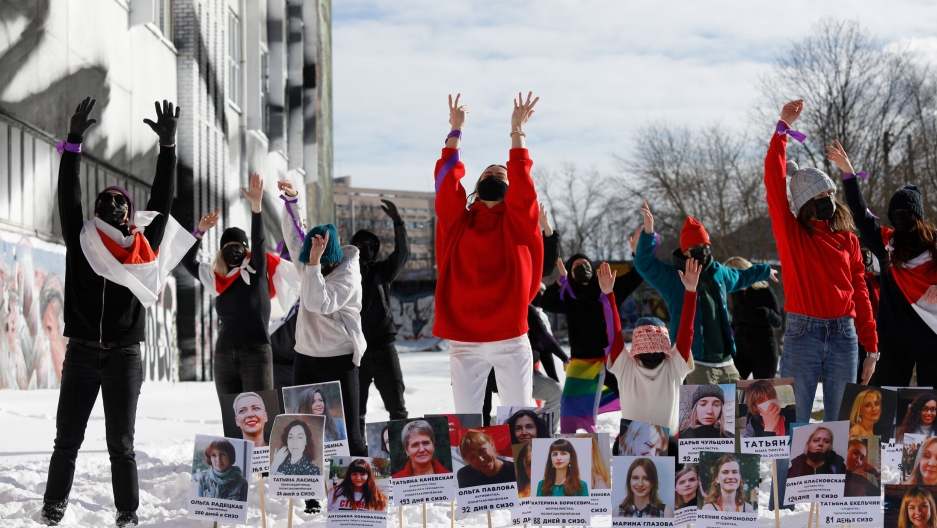 Women attend an opposition action with portrait of jailed Belarusian woman in front of them to protest the official presidential election results in Minsk, Belarus, Sunday, Feb. 14, 2021.

Authorities in Belarus on Tuesday raided homes and offices of journalists and human rights activists including the Belarusian Association of Journalists and the Viasna human rights center, in the latest move to squelch protests against authoritarian President Alexander Lukashenko.

Authorities on Tuesday also confiscating equipment from the journalists and human rights activies with more than 30 people briefly detained and at least three remained in police custody, according to activists.

"Freedoms of expression, association and assembly should be ensured according to international human rights standards," the Council of Europe's human rights commissioner, Dunja Mijatovic, said on Twitter.

The leader of the Belarusian Association of Journalists, Andrei Bastunets, was one of those detained and later released.

"This is the largest crackdown ever on journalists and rights activists Europe has ever seen," said the association's vice president, Boris Goretsky, whose home also was searched. "There have been more than 400 detentions of journalists over the last six months, and the authorities aren't going to stop at that."

At least 10 of them faced criminal charges and remained in custody.

The authorities on Tuesday also raided the head office of the Viasna human rights center in Minsk and searched the apartments of several of its activists, including the group's head, Ales Bialiatski.

"This is an attempt to intimidate journalists and human rights activists who have been telling the world about the unbelievable scale of repressions," said Viasna's deputy head Valiantsin Stefanovic.

At least three Visna activists have remained in police custody after their detention earlier Tuesday.

Belarus has been rocked by protests since official results from the Aug. 9 presidential election gave Lukashenko a sixth term by a landslide. The main opposition candidate, Sviatlana Tsikhanouskaya, and her supporters have dismissed the result as rigged, and some poll workers also have described voting manipulation.

Authorities have responded to protests, the biggest of which attracted up to 200,000 people, with a sweeping crackdown. According to human rights advocates, more than 30,000 people have been detained since the protests began, and thousands of them were brutally beaten.

The United States and the European Union have responded to the election and the crackdown by introducing sanctions against Belarusian officials.

The Investigative Committee, the nation's top state investigative agency, said Tuesday's searches are part of a probe into financing the protests.

Tsikhanouskaya denounced the raids and detentions of journalists and rights activists, saying "the regime is unleashing repressions against those who are championing human rights."

Amnesty International denounced the raids as a new escalation of reprisals against dissent.

"This is clearly a centrally organized and targeted attempt to decimate the country's independent media and human rights organizations through terrifying home raids, harassment and persecution," Aisha Jung, the group's senior campaigner on Belarus, said in a statement. "The authorities are bent on preventing them and discouraging others from carrying out their critical and legitimate human rights and journalistic work."

"We strongly condemn this outrageous act of violence and repression and demand Lukashenko's government to stop the harassment against our colleagues," IFJ President Younes Mjahed said in a statement.