Pearls cultured in the lagoons of the many islands and atolls that make up French Polynesia are world-renowned for their unique and illustrious colors.

Tahitian pearls, as they are commonly known, are found in many different colors: black, pink, green, blue and brown, with shades in between. Before the coronavirus pandemic set in, the gems accounted for a majority of the French Pacific island territory’s exports — making pearls the second-biggest driver there, after tourism.

Related: Enormous wind turbines may be coming to a coast near you

But some pearl producers in French Polynesia are contributing in another major way: by implementing innovative sustainable farming practices that help ensure the oceans in which they work stay healthy and thriving.

“I don’t even like the word ‘eco-friendly.’ I just feel like it’s just good sense. If we work in a way that works with the environment, our pearls are more beautiful and for us, that’s the most important thing.”

“I don’t even like the word ‘eco-friendly.’ I just feel like it’s just good sense,” said Josh Humbert, owner of Kamoka Pearl Farm. “If we work in a way that works with the environment, our pearls are more beautiful and for us, that’s the most important thing.” 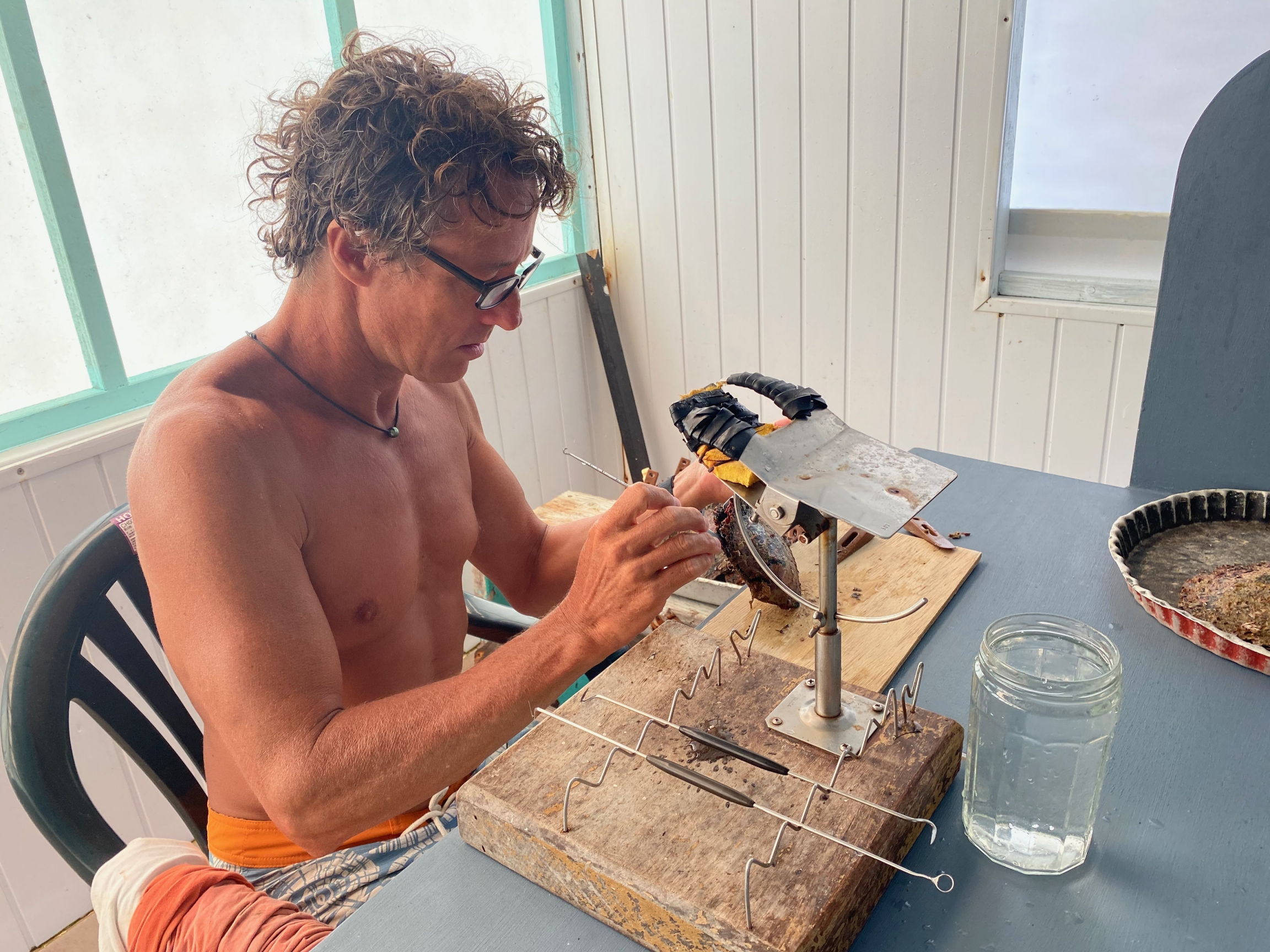 The environment has always been the priority at this small, family-owned farm established in 1990 by Josh Humbert’s father, Patrick Humbert, on the Ahe Atoll — a small strip of coral peeking out of the water about 300 miles away from French Polynesia’s main island of Tahiti.

For example, most pearl farms power-wash their oysters to keep them clean of algae and other buildup (something that must be done to keep them happy and healthy). But this practice does environmental damage by spraying the debris into the water, causing it to accumulate in the lagoon. Josh Humbert quickly realized there was another way: let the fish already in the lagoon clean the oysters.

“So, what’s that done is it’s enabled our reef's entire ecosystem to thrive basically. So, what we’ve seen is that the fish population is increasing in our waters the 30 years that we’ve been here.”

“So, what’s that done is it’s enabled our reef's entire ecosystem to thrive basically,” Josh Humbert said. “So, what we’ve seen is that the fish population is increasing in our waters the 30 years that we’ve been here.”

Kamoka claims to be the world’s first farm that started using the mother of pearl from their own used oysters to create nuclei, the small core inserted into an oyster to form a cultured pearl. Most other pearl farms use nuclei from other species, such as the washboard mussel found in the Mississippi River, according to Celeste Brash, farm co-owner, Lonely Planet travel writer and Josh Humbert’s wife. 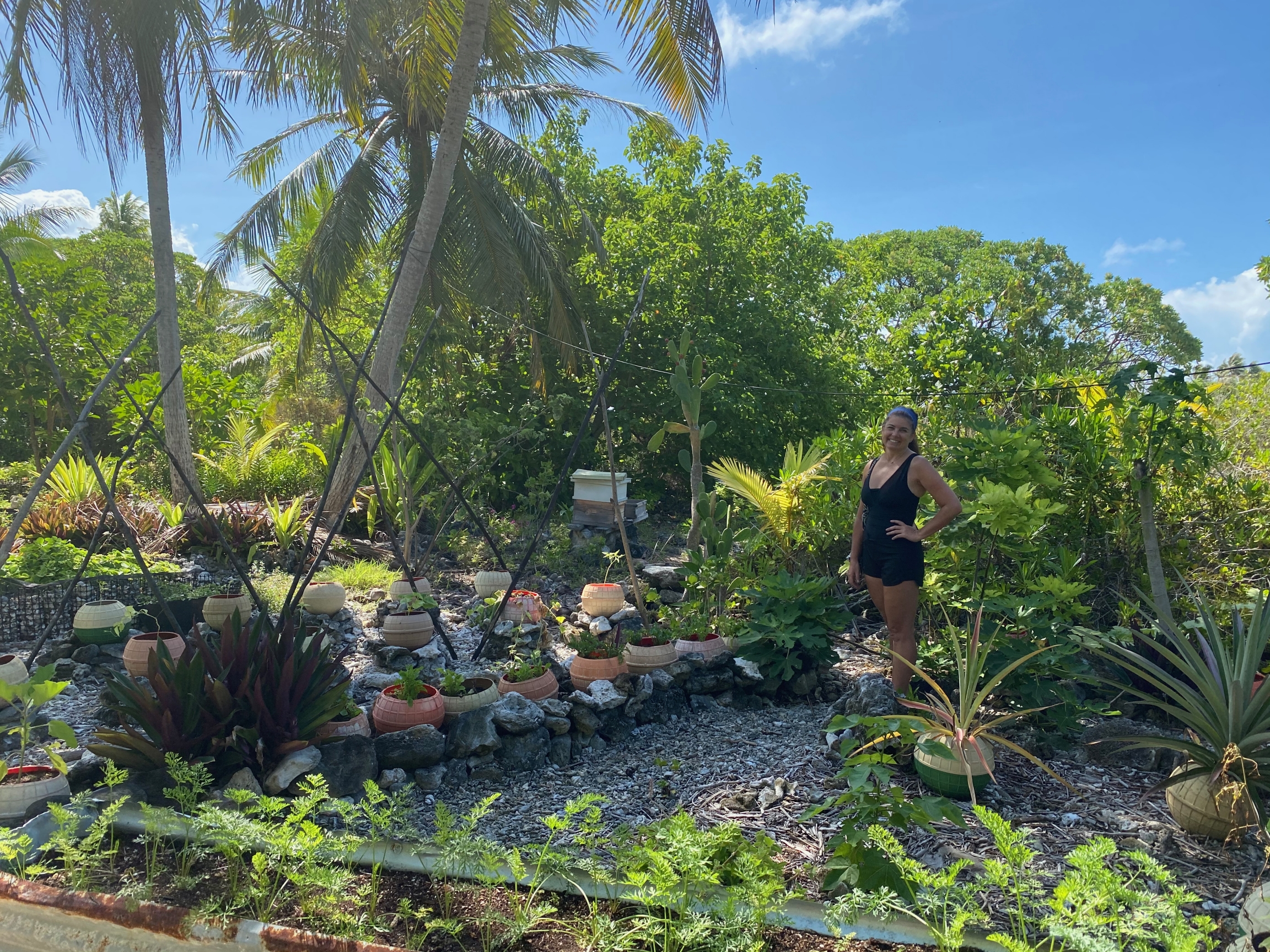 Kamoka Pearl co-owner Celeste Brash stands in front of a portion of the large garden that helps feed the farm crew. In soil made from bird droppings and coconut husks, they're attempting to grow everything from arugula and pineapples to taro and carrots in old broken buoys — all in an effort to be as self-sufficient as possible.

The crew at the farm also works very hard to be as nonpollutant and self-sustainable as possible. This involves catching and eating a lot of fish, keeping up a massive garden, using organic soap, bathing in rainwater and raising their own chickens for eggs.

“Obviously, we’d love to be 100% self-sustainable and if we can do that, we would be, but every step is such a challenge,” Brash said.

Still, most commercial farms wouldn’t be taking all of the other extra steps they’re taking, she said.

Science has confirmed that happy oysters living in a happy environment make better pearls — but that’s becoming even harder with the rapidly changing climate. Josh Humbert says their main concern right now is ocean acidification or the increase in carbon dioxide in the water due to the burning of more fossil fuels.

Related: ‘Connecting with God by caring for the environment’: Franciscan monk in Kenya shares Christmas message

“If the ocean becomes more acidic, corals won’t grow more easily and that’s detrimental to the coral reef. And for us local people, we go out fishing and we live on the reefs, so it’s important to us,” said Keitapu Maamaatuaiahutapu, a Tahiti-based oceanographer at the University of French Polynesia and a former minister of marine resources.

Meanwhile, coral bleaching, sea level rise and warming ocean waters is happening. And if “the temperature [of the ocean] goes up too high, you can’t use the lagoon for aquaculture,” he said.

Small Pacific island nations and territories like French Polynesia — which has a total landmass of merely 1,609 square miles — are at the forefront of climate change. In fact, a 2013 study published in the journal “Nature Conservation” found that French Polynesia, along with New Caledonia, another French territory in the South Pacific, are most at risk of having their island become completely submerged by rising seas.

“The government’s worried about climate change, but if you talk about sustainable pearl farming, it would come from the farmers themselves. In those actions, they always come from the bottom, not from the top.”

“The government’s worried about climate change, but if you talk about sustainable pearl farming, it would come from the farmers themselves,” Maamaatuaiahutapu said. “In those actions, they always come from the bottom, not from the top.”

The impact of sustainable pearl farms has the potential to reach even further from the shores of French Polynesia’s 116 islands and atolls — into the worldwide gem industry. 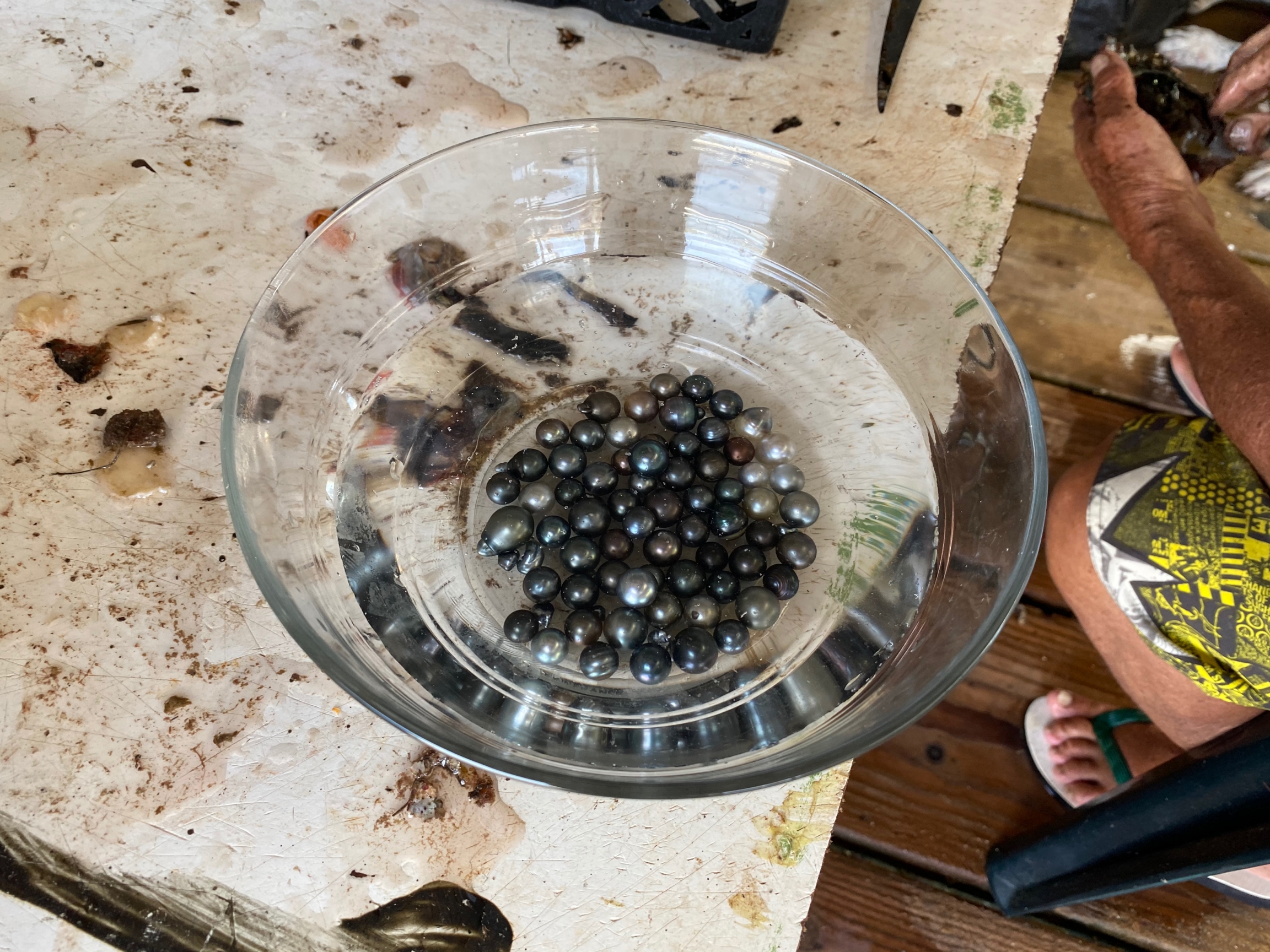 Newly harvested, cultured pearls sit in a bowl waiting to be cleaned again, and then counted and sorted. Kamoka Pearl Farm owners say they can sell a single pearl for $5 to $10,000 depending on a pearl's size, shape, quality and luster.

Laurent Cartier, a gemologist and pearl expert based in Switzerland, says thanks to farms like Kamoka actively working with others to better their practices, sustainable pearl farms may not yet be the rule, but they are also no longer the exception.

Related: Is Singapore’s approval of lab-grown meat a win for the climate?

Which is good, Cartier says, as a growing number of consumers are becoming more interested in the traceability of their jewelry.

“And what’s really interesting about pearls is that they are an indigenous resource. I mean, they really come from that island,” he said. “So, it doesn’t get more sustainable or more circular than that, you’re actually using that local resource, you’re nurturing and farming that — and then you’re selling a high-value product.”

So, even though pearls account for only a small fraction of the gem industry overall, they are in a good position to set a more environmentally friendly example for everyone else, he said.