Last weekend, something new was on the menu at 1880, a members-only club in downtown Singapore.

The restaurant is the first in the world to sell to the public cultured meat, also known as lab-grown meat — developed in a lab and grown in a facility without having to raise or slaughter a live animal.

The cultured meat industry enjoyed a global first earlier this month when a San-Francisco based start-up won regulatory approval to sell its cultured chicken in Singapore, making the Southeast Asian city-state the first nation in the world to approve this meat alternative.

“They had a really rigorous and thoughtful regulatory process,” said Josh Tetrick, co-founder of Eat Just, the company that produced the meat. “Singapore decided to get way out in front of everyone.”

Cultured meat is made by taking stem cells from the muscle of a live animal and growing them in a nutrient-rich brew, which contains amino acids, vitamins, minerals and salts — all from non-animal sources.

‘Meat, without the bad’

Eat Just and other companies are working their way through regulatory processes around the world. In the last 10 years, dozens of start-ups have been working to bring a product to the public, marketing the idea that such meat alternatives are more ethical and environmentally friendly than regular meat products.

“It's a way of eating meat without killing an animal, without tearing down a single tree, without using a single drop of antibiotics, without negatively impacting biodiversity, without accelerating zoonotic disease. ... So, you get the good stuff about meat, without the bad.”

“It's a way of eating meat without killing an animal, without tearing down a single tree, without using a single drop of antibiotics, without negatively impacting biodiversity, without accelerating zoonotic disease,” said Tetrick. “So, you get the good stuff about meat, without the bad.”

But the question of whether cultured meat could move the dial on climate change is not settled science.

Right now, about 15% of the world’s greenhouse gas emissions come from raising animals, according to the United Nations’ Food and Agriculture Organization. More than half of those emissions come from cattle production, largely from widespread deforestation carried out to grow feed, as well as methane emissions from fermentation processes happening within cows themselves that are released as burps.

Cultured meats have been framed as a green alternative, but experts wonder if they are truly going to help stem climate change. 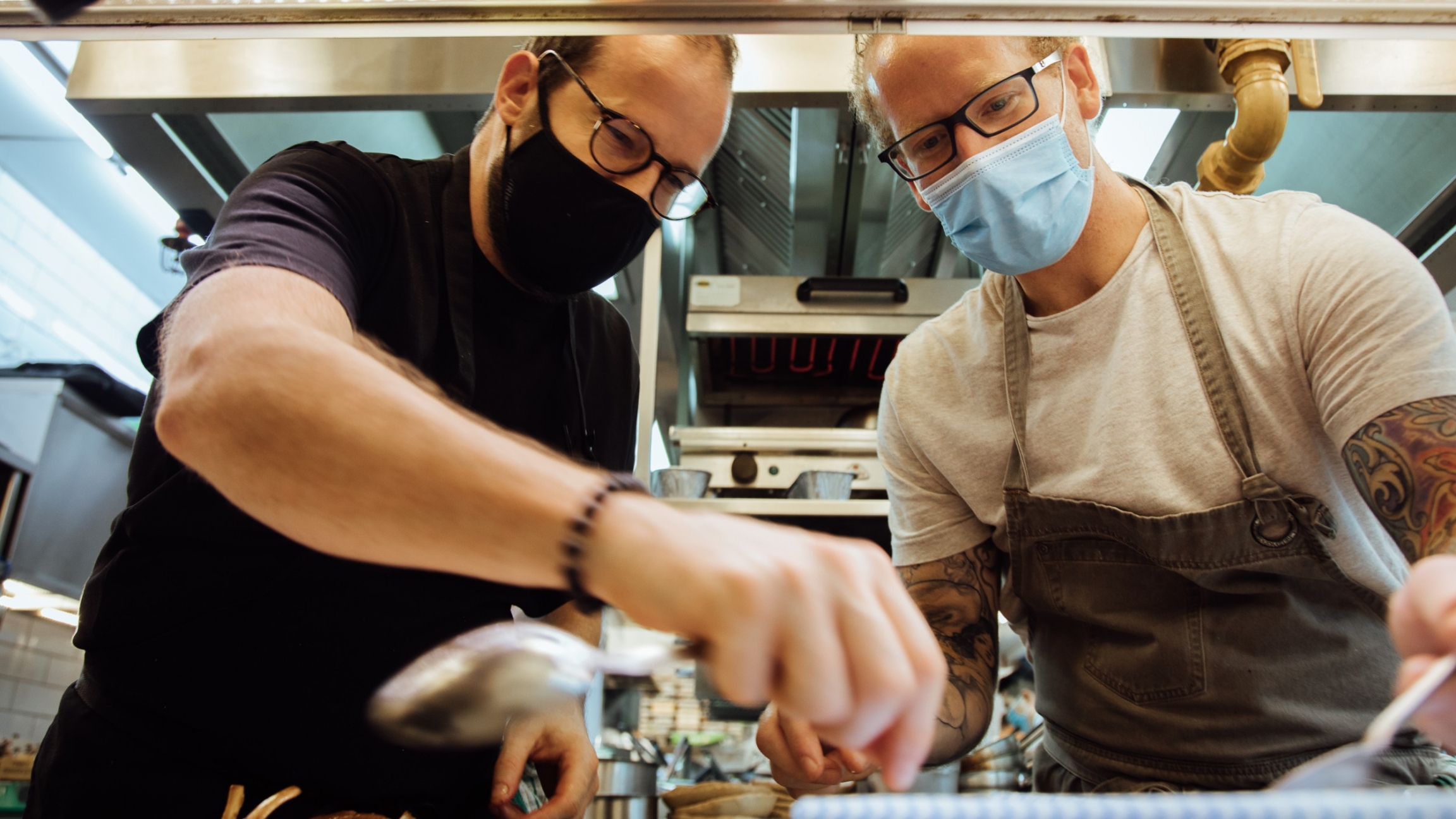 Cooks at 1880 in Singapore prepare lab-grown meat for dinner dishes to be eaten by the restaurant's customers.

Courtesy of the Good Food Institute

Recent research by Hanna Tuomisto, associate professor in sustainable food systems at the University of Helsinki, has shown that for some types of animal protein, cultured meat is significantly better for the climate.

For beef, which has the highest carbon footprint, cultured meat per-unit of protein has the potential to lower greenhouse gas emissions by 80-95% compared to regular beef.  Similarly, cultured lamb could have far fewer emissions than lamb from the farm.

At the same time, Tuomisto found that cultured pork and poultry meat have nearly the same greenhouse gas emissions as eating their animal equivalents.

While for some sources of protein, cultured meat has a significantly lower carbon footprint, it’s important to note that the facilities that produce the stuff use a lot of energy, said Tuomisto. Where that energy comes from will impact their climate scorecard.

“Electricity consumption required for producing the cultured meat itself, energy consumption is quite high,” said Tuomisto, “So, if renewable energy or low emission energy sources are used, then the climate impact of cultured meat can be substantially lower compared to conventionally produced meat.”

There’s also the question of what cultured meat is displacing. For it to be a climate solution, people have to be eating it instead of something worse, like beef, said Peter Alexander, environmental researcher at the University of Edinburgh.

“If people are eating this lab-based meat instead of their steak or their burger, then it could well be beneficial."

“If people are eating this lab-based meat instead of their steak or their burger, then it could well be beneficial,” said Alexander.

But if they’re eating it instead of a vegetarian meal, it’s likely worse.

“Effectively, [cultured meat] is an ultra-processed food,” said Alexander. “The running of those facilities requires energy, as well as whatever materials that go into the culture medium. And they all have emissions associated with them.”

Related: The meatless Whopper’s ‘Impossible’ goal: To save the planet

Plant-based, meatless meals are still a lot better for the environment.

Proponents of cultured meat believe that demand for meat isn’t going anywhere, so providing a substitute is the best way to mitigate the harms of animal production.

“I think our theory of change is pretty simple, it’s to meet people where they are,” said Elaine Siu, managing director of the Asia Pacific branch of the Good Food Institute, an organization that promotes alternatives to industrial animal agriculture, including imitation and cultured meats.

Among other things, Siu’s organization works to get meat alternatives regulatory approval. She says she’s not surprised that Singapore was first, considering how urban it is.

“Singapore is a very small country,” said Siu. “It has imminent food security issues. It imports 90% of its food.”

Siu thinks Hong Kong and Japan could be next in line. “I think we're really seeing national leaders just recognizing this is a huge opportunity,” she said.

Just last week, Israeli Prime Minister Benjamin Netanyahu did a public tasting of cultured beef from an Israeli start-up in an event organized by the Good Food Institute.

The market for meat alternatives, which includes cultured meats and imitation meats, is currently at about $14 billion, according to financial services company Barclays. The firm estimates that the industry could be worth 10 times that amount by the end of the decade.

Whether the expansion of the industry will be a boon for the climate is unknowable, said Alexander. For him, other changes in food systems are a lot more effective and important from a climate perspective, such as reducing waste and decreasing the amount of meat in our diets.

There are many possible solutions to the problem of how humans eat without wrecking the planet.

“Lab-based meat may be one of those,” said Alexander. “Now, I don't think it's the most important one, but I haven't got a problem with it being on that menu.”