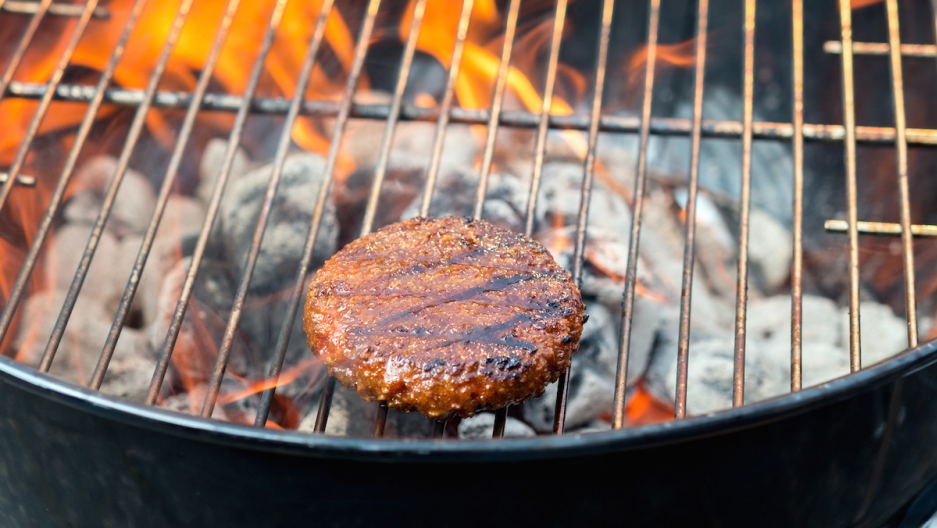 The Beyond Burger on a grill.

Courtesy of Beyond Meat

When California-based food company Beyond Meat soft-launched its new plant-based burger at a Whole Foods in Colorado in May, it sold out in one hour. The startup says the Beyond Burger is completely vegan, has no soy or gluten, and will cook like a real beef burger.

The primary ingredient in the burger is protein from yellow peas. “It turns out pea protein gives a nice texture,” says Joseph D. Puglisi, a professor of structural biology at Stanford University who is also head of the scientific advisory board at Beyond Meat.

When I tasted the Beyond Burger, it had a slightly meaty mouthfeel and a complex, fibrous texture, similar to that of its ground beef counterpart. The patty was less greasy and lighter (canola oil and coconut oil contribute to the fat content), and the aroma more vegetal, but otherwise it held together as I ate it — a good sign for grillers.

So how do you make an all-vegan product that mimics the texture, aroma, and taste of a ground beef burger? “A lot of trial and error, like all science,” Puglisi says. I spoke with Puglisi about the challenges of mimicking meat, and whether we can expect plant-based steaks in our future.

Your background is in structural biology. What does that have to do with creating a plant-based burger?

I have a Ph.D. in chemistry, but my expertise is in the shapes and structures and physical behavior of biological molecules, mainly how proteins are made. So I study protein synthesis.

The challenge here is meat. I love eating meat; it’s delicious. But what is meat? Meat is muscle tissue, right? It’s tissue that we evolved to eat. It is a very functional, biological set of cells that performs a specific function, and already you see the challenge: I need to take plant-based proteins in some way and mimic something that plants don’t do — plants do not move, for the most part. They’re static.

Muscles are a collection of fibers — actin fibers and myosin fibers that move against one another using energy to generate locomotion. That’s where it gets down to my kind of world — the shapes and structures of biological molecules. So we asked, how can we mimic this — not at a molecular level, because we’re probably not going to be able to do that — but at the level of experience? What’s the experience of eating a hamburger?

What kinds of expertise were you looking for when you were assembling the team of scientists for this project?

It’s tough because we have multiple targets — we have to develop a raw hamburger that is satisfying to the consumer when they go and buy it, then it has to change color and texture and aroma and flavor when we cook it. Raw ground beef has a very different flavor profile than cooked ground beef.

One of the ways flavor often develops in food is something called the Maillard reaction, which happens at high temperatures when sugars react with the components of proteins and create nice-tasting, rich-tasting flavor that develops when you brown a nice piece of meat, for example. So we had to get those reactions to occur. And then we also had to understand how the meat changes its texture as you cook it. A normal ground beef burger starts off very pliable, like Play-Doh, and then as you cook it, it hardens up. So we needed to have people who understand how temperature affects the materials properties of proteins.

And then we also needed a chef. At the end of the day, it’s gotta taste good, and it’s gotta be something that a chef goes, "Yeah, I would serve that in my restaurant."

How much of the challenge of making this burger was quantifiable? For example, can you measure mouthfeel?

I would say a significant fraction was quantifiable. Obviously, things like color and changes in texture that occur during cooking — those are all very quantifiable. The molecules that are contributing to flavor are things we can measure. But the nuances of mouthfeel, of the interplay of aroma and flavor, slight changes where someone would detect a bitterness — there the human body was a better measurement device than anything in a laboratory. I just want to make it clear that not everything about making a food product is science. There’s still an art to it, and that’s because the human experience of eating is such a complex sensory event.

The new plant-based burgers coming from Beyond Meat and Impossible Foods make a point that they’re trying to mimic real ground beef, instead of just being their own kind of vegan product. Why do you think the choice here was to mimic real meat?

I think the past products that were vegan, maybe they thought that that goal was too difficult. So I think part of this is, we set a clear target. We understood parameters, in terms of biological and physical and chemical behavior we wanted in the hamburger. We broke the problem down into its simpler components, and we did straightforward experiments. I’m a big believer that science should be stripped down to its basic principles and simple approaches.

A lot of the reason I believe this is a great moment for this type of approach, the reason there is Impossible Foods and Beyond Meat, is not only because the consumers are ready for it, and there’s a need for this — in terms of decreasing meat consumption and meat animal husbandry for environmental and societal reasons — but the science is ready for it. We’re able to make measurements that we could never make before.

We’re able to image biological systems to understand the microstructures that lead to the gross properties of food better than we could before. We understand the genetic makeup of all the plants that we’re working with. We understand the interplay of food and health much more than we ever did before. So there’s just so many things that have led to this being a great moment. A lot of it is just enabling technologies. Yes, there was a lot of trial and error, but underlying that was a lot of measurement to guide us in how to improve things. And a lot of tasting, obviously. The fun thing about this kind of science is that you get to eat your experiment.

So what’s next — a plant-based steak?

You might imagine the next challenge is creating ground beef that you make meatloaf out of and meatballs. Right now we’re focusing on a hamburger, which is a defined cooking experience, but beef is also used to make a ragu, where you cook it for a very long period of time. Can we mimic all of the cooking behavior of ground beef? This has been a great foundational project. It’s going to create outstanding hamburgers that people are really going to enjoy eating, but it’s giving us a knowledge base to then expand and go in lots of different directions, like trying to recreate a steak or other cuts of meat as well.