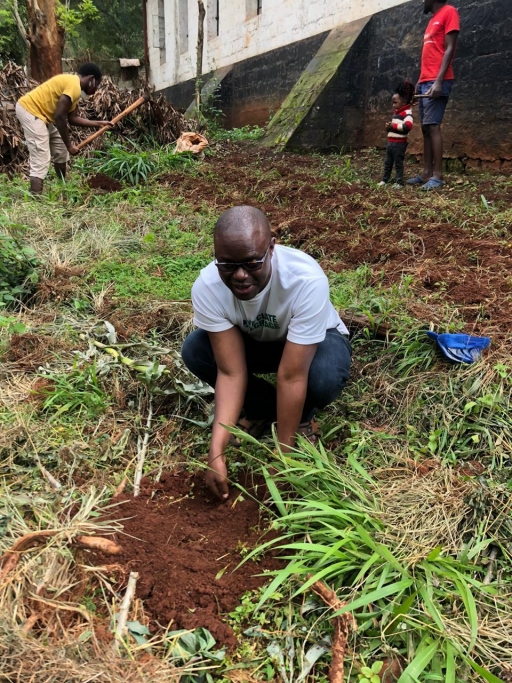 For most Christians, this will not be a “normal” Christmas. But “normal” is putting it mildly.

To many around the world, the end of 2020 marks the close of a year of concurrent disasters, devastating floods, unprecedented fires, destructive hurricanes and cyclones.

A large number of faith leaders across the planet are now making the case that climate justice is the moral cause of our times.

Pope Francis, the supreme pontiff of the Catholic Church, has famously led the way in making the connection between religious teachings and climate justice, through his 2015 encyclical Laudato si’, as well as his meetings with world leaders and even a TED talk.

His message of the moral urgency of the climate crisis is being spread from the Vatican all around the world by the Global Catholic Climate Movement.

Brother Benedict Ayodi is a Franciscan monk in Nairobi, Kenya, who has heeded the bishop of Rome’s call to action. He spoke with The World’s Marco Werman about his motivations.

Marco Werman: Kenya has had a really tough year. What climate change impacts have you seen first hand in Kenya, and other East African countries over the past 12 months?

Brother Benedict Ayodi: The climate impacts that we've had indeed in this year: we've experienced a change in terms of rainfall patterns. We had the worst floods earlier this year and not only in Kenya, but also in Rwanda, Somalia, Burundi, Ethiopia, Uganda, and Democratic Republic of Congo, and also in Tanzania, and Mozambique. And ... 700,000 people are affected in all of these countries. We've also seen intense droughts. So we are expecting hunger and famine in some parts of the country and indeed of the continent. We've had a scarcity of water because of the drought. So, we've seen that there are conflicts in several parts of Africa. This is causing conflicts.

What has been the human cost of all these disasters you've been describing in East Africa? And how have you — as a climate activist — addressed that human cost?

Of course, the people who suffer most due to the effects of climate change are the poor. And we have a big population living in extreme poverty. And so we have a training called the Laudato Si Animator's Program where we train people on how to tackle these issues and how to take climate action. We have programs like divestment programs. This divestment is calling Catholic and non-Catholic institutions to divest from fossil fuels.

As a Franciscan monk, you take your spiritual cues from Saint Francis when it comes to faith and being a good steward of the environment. So, explain the connection to Saint Francis and why do you do the work that you do?

Oh, that's a very, very good question and I'm glad you asked it. St. Francis was motivated by faith to care for creation. He started seeing everything through the eyes of nature, and the humans, in what we call the cosmic fraternity. Each and every creature is interconnected under one God. Everything he personifies, and he gives human names to creatures in the sense that they all have their dignity and integrity. And therefore, they need to be cared for and not be destroyed. It is a spirituality, it is a way of life. It is a way of connecting with God by caring for the environment.

Well, there are plenty of opportunities to relate to nature in the wild in Kenya. I gather you are experienced at escaping from lions, Brother Ayodi?

Haha, I am delighted. You probably read this story I wrote a couple of weeks ago. We were in one of our houses in the coastal part of Kenya called Mpeketoni. On this particular day, we went to go and milk our goats and cows, but when we came out of the house, we realized something strange. It was a lion that had attacked our cattle. It was actually eating one of the goats. And suddenly we faced the lion right in front of us. When we tried to turn back and run, one of my colleagues just fell on the ground and he could not run anymore. It was a scary moment. So we called the police and the police wanted to shoot the lion. But one of the missionaries, a Franciscan, pleaded with them, saying, "Why can't we just let the lion go back to its natural habitat?"

They left it to feed on the goat. Later, it walked back to the forest. Each and every creature has its own dignity and integrity, and therefore it needs to be respected and cared for.

So Brother Ayodi, Christmas is a holiday for many. This year, the chance to be in the community is being discouraged. Where do you see themes of sustainability and human connection to nature in the story and traditions of Christmas, in Kenya especially?

Traditionally, here in Kenya, people have different ways of celebrating Christmas. Instead of people going out to buy a lot of stuff for Christmas and celebrating, we are encouraging people instead to participate in charity. We're promoting — instead of doing a lot of celebrating and eating — planting trees. People are coming together to plant trees, especially in dry areas. Some of the people are distributing seeds for planting when the rainy season comes. So this is just an idea of reducing this consumerist behavior and this is also a way of celebrating as a community.

Well, have a happy Christmas, Brother Benedict, and thank you so much for speaking with us.

Thank you. Merry Christmas to you and all who are listening.