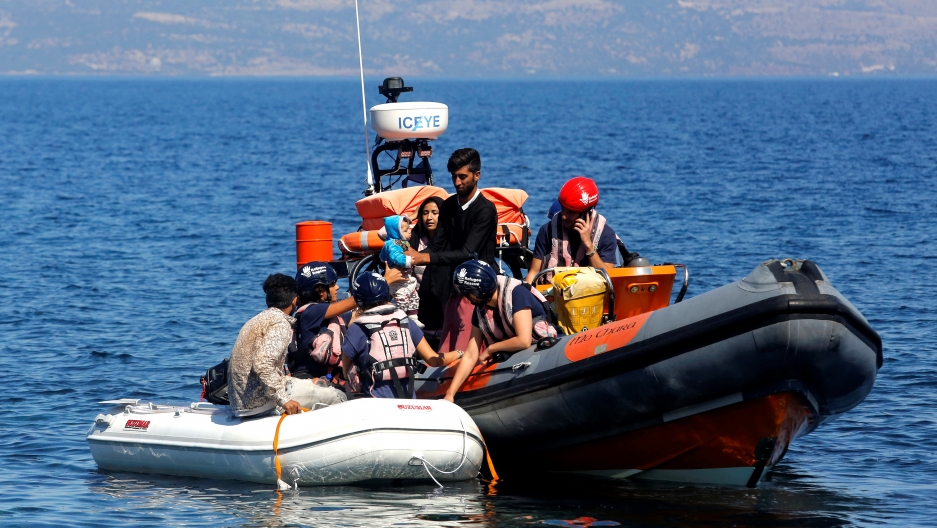 In this file photo, a small inflatable boat carrying migrants from Afghanistan is towed by a rescue vessel of the Refugee Rescue NGO, near Skala Sikamias, on the island of Lesbos, Greece, Sept. 16, 2019.

Around midnight on Nov. 8, a dingy carrying approximately 25 migrants, including an Afghan father and son who were making the journey from Turkey to seek asylum, capsized off the coast of the Greek island of Samos.

The panicked survivors swam to shore in pitch-black darkness — and when they made it to land, they did what many migrants who run into trouble in the Aegean Sea do: They called Tommy Olsen, head of the nongovernmental organization, Aegean Boat Report, in Norway.

For the first 5-10 minutes of the call, Olsen said all he could hear from the other end was screaming.

“You could clearly hear that these were people in desperate need of help.”

“You could clearly hear that these were people in desperate need of help,” he told The World.

The Afghan boy, who was 6 years old, was later found dead.

The case has received international attention, partly because Greek authorities took the unprecedented step of arresting the grieving father and charging him with child endangerment. He now faces 10 years in prison.

“It’s something that’s never happened ... before. If we start pressing charges to the families that are coming, it’s like denying them the right to ask for asylum here in Greece.”

“It’s something that’s never happened ... before,” said Dimitris Choulis, a lawyer representing the father. “If we start pressing charges to the families that are coming, it’s like denying them the right to ask for asylum here in Greece.”

But Olsen and Choulis are also trying to shed light on what they describe as a flawed rescue effort by authorities.

According to a timeline the two put together, Olsen alerted the Greek Coast Guard about the incident shortly after midnight on Nov. 8. But the men allege help didn’t arrive until hours later. It wasn’t until 9:30 the next morning, the men say, that the body of the child was brought to land.

“So, the question that I have is: What did they actually do?” Olsen said.

The Coast Guard has disputed allegations of a delayed response, saying that they launched a rescue effort immediately after receiving reports of a vessel in distress, but that initial attempts to reach the area were hampered because it was dark.

“If this had been about Greek people or tourists who had gone down at midnight, they would’ve sent out helicopters and Frontex would have been alerted,” Olsen said.

Frontex, the EU border agency that under EU law is obligated to assist member states with search-and-rescue operations at sea, was not alerted, Olsen alleged, despite having several vessels nearby. The agency did not respond to The World’s requests for comment.

Related: This Syrian is stuck at a makeshift border camp in Greece

Questions about this incident come amid mounting allegations that these very same authorities have been involved with illegally pushing back migrants — preventing them from reaching the EU or turning them back. The Greek government has called reports of these pushbacks "fake news" and propaganda.

“These types of reports are … an insult to our Coast Guard,” Greek Prime Minister Kyriakos Mitsotakis said during an interview with CNN in August. “[The] Greek Coast Guard saved literally tens of thousands of refugees and migrants at sea and our islands have always provided shelter to those in greater need.”

Human rights groups, though, say it’s becoming increasingly hard for the Greek government to deny these allegations. This past Wednesday, the EU Observer, a news website, published emails that show the Greek Coast Guard ordering that a small boat be pushed back into Turkish waters. And on Thursday, Europe’s leading human rights organization, the Council of Europe, released a report that calls on Greece to stop these pushbacks.

As for the tragedy on Samos, an autopsy on the boy is expected at any moment. Choulis, the lawyer, said he hoped it would answer some questions about the boy’s death and whether a faster rescue could’ve prevented it.