International calls to boycott the 2022 Winter Olympics in Beijing are growing, as people around the world question whether China should still host the Games amid widespread human rights abuses across the country.

Among those considering a boycott is British Foreign Secretary Dominic Raab, who said in October: “The concern over what’s happening with the Uighurs is not something we can turn away from. Let’s consider, in the rounds, what further action we can take.”

US Senator Rick Scott, a Florida Republican, has also spoken out against China’s hosting gig. In October 2019, he told CNBC that “the 2022 Olympics shouldn’t be in China. We gotta say: ‘China, until you become a legitimate country that is going to respect human rights, we’re not going to do business with you.’”

Today, I wrote to @iocmedia President Thomas Bach requesting a meeting prior to their Executive Board meeting.

The IOC must stand up for freedom and urge Communist China to stop violating human rights, or find a new home for the 2022 @Olympics. pic.twitter.com/wFT4k0GyvC

This week, Australian Senator Rex Patrick told ABC Australia that he supported a boycott of the Games due to security concerns for athletes who attend.

"It's unsafe for Australians to go to China," Senator Patrick said. "I can't see a change occurring any time soon and indeed people need to consider that in the context of a decision to send athletes to China for the Beijing Olympics."

International human rights organizations are making similar demands to relocate the series of high-profile sporting events. In September, more than 160 of them wrote a letter to the International Olympic Committee (IOC) asking for the Games to be moved out of China.

“The IOC must recognize that the Olympic spirit and the reputation of the Olympic Games will suffer further damage if the worsening human rights crisis, across all areas under China’s control, is simply ignored,” the letter reads. It also says that stripping Beijing of the Games would fulfill the Committee’s duty to “abide by the Olympic Charter’s core principles about ‘human dignity.’”

But the Uighur issue is far from the only human rights concern, according to advocates in the West. Tibet has long faced similarly oppressive tactics.

“We have been attempting to have a dialogue with the IOC for many, many years,” said Mandie McKeown, the campaign coordinator for the International Tibet Network, one of the organizations involved in the campaign. McKeown said she and other organizations have been urging the IOC to change its attitudes toward China since 2001, when the country was awarded the 2008 Olympics.

Upon receiving the letter in September, the IOC agreed to meet with McKeown and other human rights organizations. They gathered — virtually — in early October. McKeown said it was a welcome opportunity, but one that didn’t lead to any promises of a change in venue. 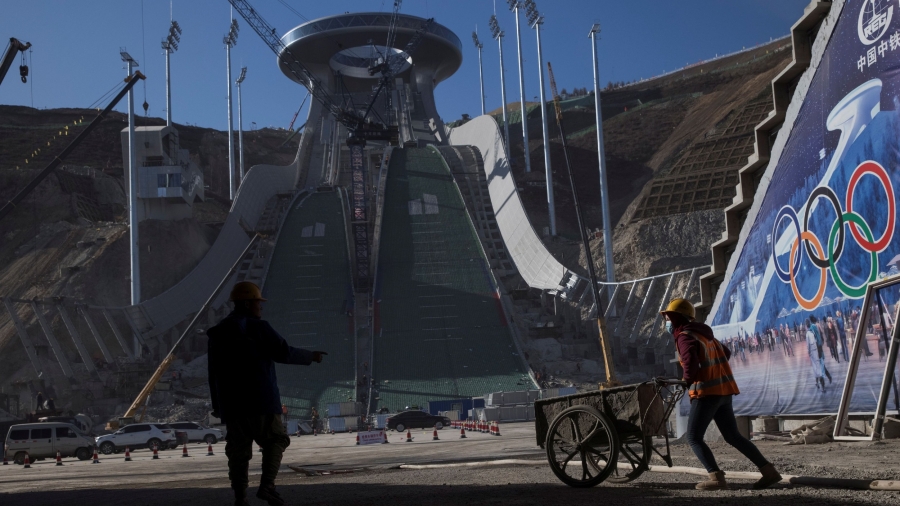 Laborers work at the construction site of the ski jump arena of the 2022 Winter Olympics in the Chongli district of Zhangjiakou, Hebei province, China, Oct. 29, 2020.

“With all the evidence they have at their fingertips, it’s just utterly ludicrous they believe this was the right move,” she said.

The IOC defends China’s hosting duties because they believe in the separation between sport and politics.

“The Games are about sport and about the athletes,” IOC Executive Director Christophe Dubi said at a recent press conference. “And this is a line we do not cross.”

“Some organizations have linked the so-called human rights issues with the Beijing Winter Olympics in an attempt to put pressure on the Chinese side, which is a mistake to politicize the sports movement,” Wenbin said.

‘Intersection of sports and geopolitics’

Meanwhile, many China critics say that sports and politics have been intertwined for decades.

“The intersection of sports and geopolitics has been a long-established fait accompli,” said Lindsay Sarah Krasnoff, a historian and research associate with the Center for International Studies and Diplomacy at SOAS University of London. She said one of the earliest examples of this nexus was the 1936 Summer Olympics in Berlin.

“Nazi Germany served as host and really tried to use their host duties of the Olympiad to showcase to the world what they perceived to be the positives of Nazi ideology,” Krasnoff said, adding that the Nazis wanted the Games to showcase how their program “had helped German society.”

At the time, there were a few calls for boycotts, but when the Games began, countries showed up. Only a few individual Jewish athletes from around the world chose to stay home. Later, in 1976, nearly 30 countries boycotted the Games in Montreal, when the IOC refused to ban New Zealand — whose rugby team had toured South Africa during apartheid.

Then came the only US-led boycott in Olympic history. The United States refused to attend the 1980 Summer Games in Moscow in response to the Soviet invasion of Afghanistan.

Dick Pound, a Canadian swimming champion and advocate for ethics in the world of sport, was a new IOC member at the time, when he remembers questioning the US strategy.

“If your objective is to change Chinese policy, it has no chance of working. Anybody who thinks it has a possibility of working is just way off the mark.”

“If you don’t get out of Afghanistan, we’re going to punish your athletes. And that’ll teach you,” Pound said, laughing. “And everyone is shaking their heads going, ‘This does not have the impact that you seek at all.'”

Indeed, the Soviet Union stayed in Afghanistan, and instead organized a counterboycott of the 1984 Olympics in Los Angeles. Pound said a Beijing boycott in 2022 could see similar results.

“If your objective is to change Chinese policy, it has no chance of working. Anybody who thinks it has a possibility of working is just way off the mark,” he added.

‘Call attention to the issues’

What boycotts can do is serve as an effective public relations campaign, historian Krasnoff said.

“They can call attention to the issues at hand, force greater public consideration of the issue, and put big international leagues or companies into the spotlight,” she added.

But with over a year until the 2022 Games, the reality of any country withdrawing from the Games is still up in the air. And, according to Alan Bairner, a professor of sport and social theory at Loughborough University in the UK, countries need to use that time to weigh the full costs and benefits of a boycott. He warns it could lead to unintended consequences.

“If there was a serious attempt to damage China’s reputation through a boycott of the Winter Olympics, [Chinese President] Xi Jinping would simply say, ‘We’ve had 100 years of humiliation at the hands of the British, the Americans, the Japanese, and others. And they’re doing it all over again,’” Bairner said. That response, he added, could embolden China’s president, as opposed to budging his policies.

If countries formally go forward with a boycott, the IOC’s Pound says that athletes’ individual Olympic dreams will still be protected, however.

“We will invite them ourselves — as if they were refugees,” he said. “Leave it to the athletes to decide.”

McKeown says she and other human rights groups are still strategizing about whether to call for a full boycott. They currently support a diplomatic boycott, a situation in which countries would send athletes to the Games but not their national heads of state.

But she’s confident that the pressure on countries to consider the call to action is mounting.

“We will see more and more governments come out and really put their heads above the parapet and say they are not going to stand for this anymore,” McKeown said.

The Winter Olympics are slated to begin in Beijing on Feb. 4, 2022.