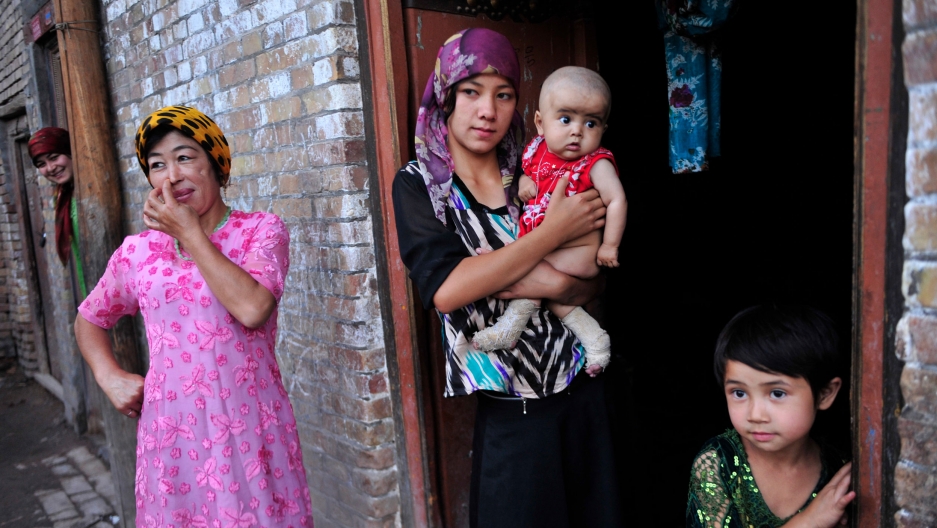 An ethnic Uighur woman hugs her son as she stands outside her house with her daughter and neighbors at an old residential area of Kashgar, Xinjiang Uighur Autonomous Region, July 22, 2012.

Mass surveillance and detention in so-called "re-education camps" are still the norm for thousands of Uighurs in western China.

Beijing has cracked down on the predominantly Turkic-speaking Muslim ethnic minority for years. Now, a recent investigation from the Associated Press and research by Adrian Zenz, a leading expert on Chinese repression in its western region, show the Chinese government is trying to systematically slash the birth rates of its Uighur population with forced birth control and sterilization.

In the mostly Uighur regions of Hotan and Kashgar, birth rates dropped by more than 60% from 2015 to 2018, data show.

There have been several cases of forced sterilization and other measures to control minority populations throughout history.

Alexandra Stern is a professor at the University of Michigan who studies history, culture, and reproductive rights. She spoke with The World's Marco Werman about the report on the situation of Uighurs in China and the historical context of demographic repression.

Marco Werman: What stands out to you in these reports coming from Xinjiang?

Alexandra Stern: On the one hand, there are similarities with other instances of sterilization abuse and state-run campaigns for reproductive control. For example, there are similarities with the Fujimori-led sterilization campaigns in Peru in the late 20th century. And there are also resonances with the forced sterilizations that occurred in the United States as recently as 2010. What stands out, though, about what's happening with the Uighurs is the multipronged reproductive control that the state is implementing, which encompasses forced abortions, sterilizations, IUDs and other forms of birth control, all connected to what appears to be massive detainment and incarceration. So there is kind of multiple layers of human rights abuses.

Chinese government statistics, state documents and interviews with detainees show that this is a carefully crafted campaign against Uighurs. What's the scale of this?

The scale is monumental. I mean, in terms of both the broader history of forced sterilization and reproductive injustice, and in terms of being a campaign that has a strong component of Islamophobia and as part of a nation-building project. It's significant both internationally, and also in the context of China, which has a long history of engaging in population control projects on its majority and minority populations.

You mentioned the various measures that are being used, like forced sterilizations and abortions. So what are the long term health consequences of this on the people, obviously, mostly women who are subjected to it.

Unfortunately, I don't have much information on some of the clinical aftermaths of these procedures. However, we can say that it's very unlikely that any of these women are being tracked to look at post-operative outcomes or that they are being given anything that we would call systematic, quality health care. So that's one issue is that reproductive health always needs to be incorporated into a broader holistic health. So that doesn't appear to be happening. And then finally, there is the mental health component of this, which is one of the aspects of sterilization abuse that I've studied in the US context, where women who are forced to undergo sterilization experience a really unpleasant mixture of shame and regret and fear and anxiety. And I cannot but imagine that some of the women who've been subjected to this in northern China are in the same circumstances.

Generally, Alexandra, would you qualify reproductive control of a minority population genocide? And what would you say about it in this particular case?

Well, if we look at the international legal definition of genocide as an attempt to significantly reduce or stop the possibility of procreation of a particular population, then it does meet that criteria. This is a concerted effort to control and to reduce the population of racial and religious minority in significant numbers.

Does the UN or the International Criminal Court have any authority over this?

I'm not sure what legal authority they have. In the past, similar instances of sterilization abuse have resulted in cases being brought to international courts, such as in the case of Peru, where a case was brought before the Inter-American Court. And I would suspect something similar is underway with reproductive rights advocates, international NGOs and other entities that are representing this marginalized population in northern China. And certainly this evidence will be really instrumental in building a case to demonstrate how extensive these abuses are.