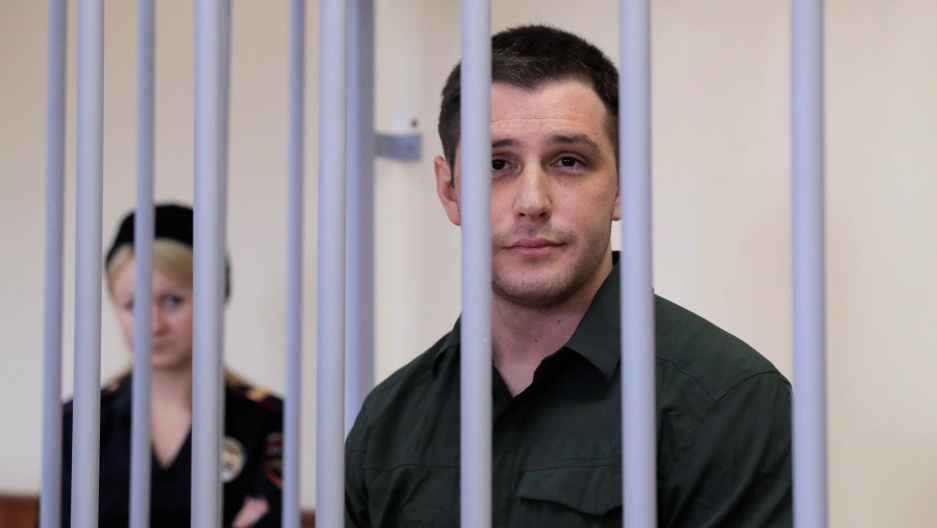 US ex-Marine Trevor Reed, who was detained in 2019 and accused of assaulting police officers, stands inside a defendants' cage during a court hearing in Moscow, March 11, 2020.

A former Marine is sitting in a Russian prison for a crime he didn't commit — at least, that’s the argument from US lawmakers and diplomats about the case of Trevor Reed.

In late July, Trevor Reed was sentenced to nine years in a Russian penal colony after a Russian court convicted him of assaulting two police officers in Moscow. During the trial, the police presented virtually no evidence supporting that claim. Trevor Reed and his family say the sentence is politically motivated and that he's being used as a bargaining chip. The US ambassador to Russia, John Sullivan, called the sentence “ridiculous” and “theater of the absurd.”

Meanwhile, two bipartisan Congressional resolutions — one in the House of Representatives and one in the Senate — are calling for Trevor Reed's release.

Trevor Reed’s father, Joey Reed, joined The World’s host Marco Werman from Moscow, where he has spent the last year trying to get his son released.

Marco Werman: Joey, can you tell me a little bit about your son, Trevor? How would you describe him?

Joey Reed: Well, it's difficult to, you know, when you're talking about your own son. But, you know, we would consider him the all-American boy. You know, he was an Eagle Scout, active in different things in school, played, several different sports, joined the Marine Corps, served there for a few years and was honorably discharged and then later went to went back to college and was in the middle of college when all of this occurred in Moscow. But he's a loving son. He has lots of friends, just a good person.

How did Trevor end up in Russia?

Trevor met a Russian girl, Lina, about three years before this happened. They met in Greece on vacation, so they started dating long distance. And then she started coming to visit us in the United States. In January of 2019, Trevor came to Moscow to visit her and her family. And then he came back in the summer of 2019 to not only visit her, but also to take Russian lessons to help him with his studies at the University of North Texas.

So, then he goes back to Russia. I mean, explain the case to us. What are Russian authorities saying is a reason for his imprisonment now? And what have you learned from Trevor and from your own efforts fighting for his freedom?

Lina and Trevor were at a birthday party for her and another person that worked where she worked at the law firm. The people there were getting Trevor to toast to Russia, to the United States, with vodka shots. And he became very intoxicated. And on the way home, they stopped the car. He got sick, and then he wouldn't get back in the car. And they felt that he was going to hurt himself or run into traffic and hurt someone else. So, they called the police.

Lina and the other people followed the police car to the police station. And they said, "Once he sobers up, you can come back and get him, about 9 o’clock, and pick him up." She went back at 9 o'clock and at that time they told him he couldn't leave. Right after that, the FSB arrived and then he was charged with endangering the lives of police officers. They've given Trever the longest sentence given to anybody in Russia for that crime, which is where we get into the — we believe that this is a political imprisonment.

You know, obviously, neither government is going to divulge this. If the Russians are holding Trevor as a political prisoner, they are not going to admit to it. And the United States obviously isn't going to tell us or anyone else what actions they are taking, you know, directly with the Russian government. But we believe, and there's a belief in the media, that Paul Whelan and Trevor Reed were taken and convicted in the way they were as a means of having someone to trade for.

Related: Petraeus on Russian bounties in Afghanistan: 'We were looking for this kind of activity'

You painted a sympathetic portrait of your son earlier. Is it possible that Trever was involved in something that you just didn't know about?

No. Our son lived with us while he was going to college. And there's no way that he was involved in anything as far as like, you know, working for the government or got involved in anything here. You know, we know him and I know everyone says that, but this whole thing is just ridiculous.

Your family, your community and friends, how did they react to Trevor's situation?

Well, obviously, everyone was shocked and everyone is upset. More so than that is, when I explain or tell Russians about the situation — just, a taxicab driver or just a person asked me what I'm doing in Russia, and I explained to them what's happened. Many of them have hurt my son's story on the TV here, you know, on the news. And they immediately they're like, "Oh my gosh, I'm so sorry. Oh, I'm so sorry this has happened to him." So it's not just our friends and family. It's people in Russia are like, "Oh, that poor guy. You know, they do bad things to people in Russian courts, but they don't even do that to most Russians."

When was the most recent visit you had to actually see Trevor, and how is he doing? What kind of conditions is he detained in?

Lina and I visited Trevor yesterday. Some of our visits with Trevor have been difficult because, you know, he was either hurting — he has some back pain. But yesterday, he was in a very good mood and he was super happy to see us.

Trevor, he's in a room with, that holds six people. They’re brought food maybe three times a day. A lot of the times it's like a goulash. They're allowed one shower a week. If you pay extra money, you can have an additional shower. One hour a day, they're taken to a room on the top of the building where the roof is open. It's covered by bars, so it's open air. So, in the winter when it's zero degrees, it's zero degrees in this room. But you're allowed to walk around in this room. That's your exercise room.

So, anyway, it's not optimum conditions. We're trying to get it to where he can call his mother in the United States and sister. But that still hasn't happened. And that's on a payphone, I guess, in a hallway somewhere. So, there's certain things that other prisoners have gotten that he's been denied. But we are thankful to the warden for the things that they have allowed. And that's probably due to the embassy stepping up its complaints and calls to the jail and the foreign ministry.