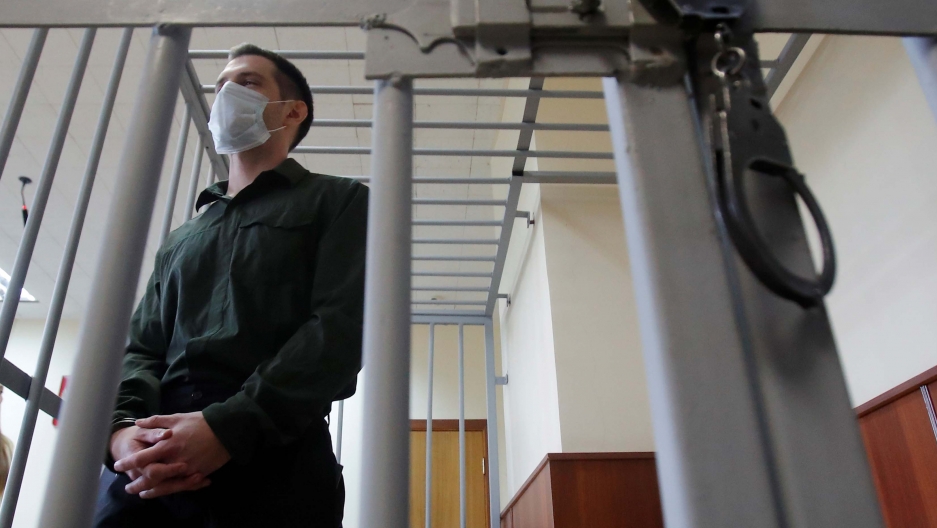 Former US Marine Trevor Reed, who was detained in 2019 and accused of assaulting police officers, stands inside a defendants' cage during a court hearing in Moscow, Russia July 30, 2020.

A Moscow court sentenced a former US Marine to nine years behind bars Thursday.

Trevor Reed, a student at the University of North Texas, has been found guilty of endangering Russian police. Russian authorities said he attacked the driver of a police car last summer after being picked up when he was drunk, causing the car to swerve dangerously.

But Trevor Reed's father, Joey Reed, questions whether that's what really happened. And Trevor Reed has denied the charges, also saying he could not remember what happened because he was drunk.

“We have a traffic video from four different cameras on the street that the police officers identified as where it occurred, and it never shows the police car swerving,” Joey Reed told ABC News. “We felt without evidence alone that the charges would be either be dropped or lowered. But they have refused to do that.”

The conviction has spurred media speculation that Trevor Reed could become part of a possible prisoner swap reportedly being negotiated by Moscow and Washington. Neither side has confirmed such talks are taking place.

The World’s host Marco Werman spoke to Michael McFaul, the former US ambassador to Russia, about what the case means for US-Russia relations.

Marco Werman: Ambassador, what more can you tell us about this case?

Michael McFaul: Well, it's tragic, of course. It's awful. I applaud what the current ambassador from the United States to Russia has said about the case, Ambassador John J. Sullivan. He said the evidence is flimsy, and most certainly, Trevor Reed should not spend nine years in a Russian jail.

Related: How Russia laid the groundwork for future disinformation campaign

Have you spoken with the current ambassador to Russia, John Sullivan, about these cases or at all since he's been appointed?

No, I saw him right before he went out. I have not spoken to him, and I only speak to US government officials when it's in their interests and when they think it's useful. And when it comes to Russia these days, given my radioactive reputation there and as your listeners may remember, I've been banned from traveling to Russia since 2014. Probably not in his interest to be consulting with me.

Well, earlier you did have praise for Ambassador Sullivan. So much has changed since you left your post as ambassador. The Mueller Report detailed the ways Russians interfered with the 2016 election here. What can an ambassador really do to improve relations between Russia and the US right now? Do you have any advice for John Sullivan right now?

Well, I think it's a tough assignment, and most certainly, things have gotten a lot tougher since I left in 2014. My advice would be to him and to his team and to the Trump administration is to engage with Putin and the Russian government on issues of mutual interest. And for me, at the top of that list is to extend the new START treaty. I think that's good for America, and I presume it's good for Russia. And at the same time, speak out about things that we disagree with, with respect to Russian policy — and in that category, I admire what Ambassador Sullivan is doing in Moscow. But it’s at such odds with what President Trump says that it undermines the integrity and legitimacy and the meaning of the words of a US ambassador or an assistant secretary of state and the State Department. And that gap, I think, needs to be closed.