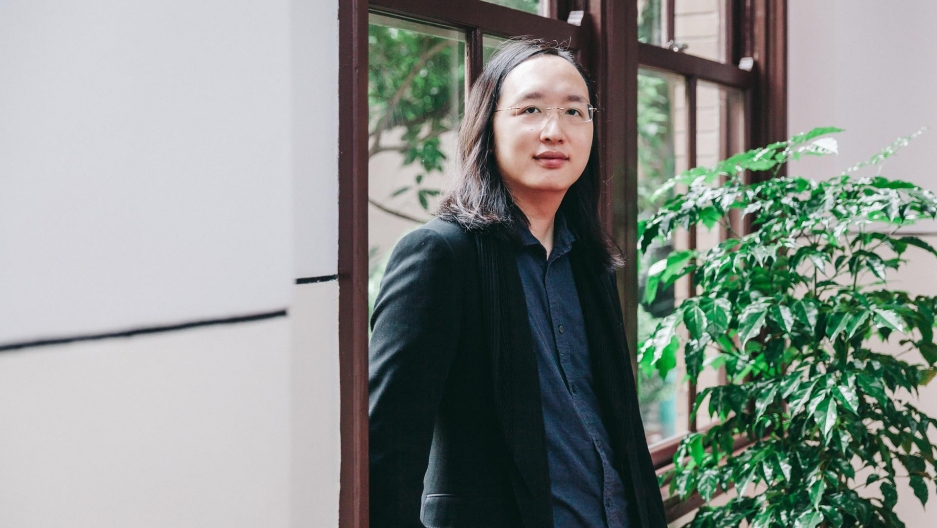 Taiwan’s digital minister, Audrey Tang, is reshaping ideas about what government officials can do.

Tang, a free software programmer, was Taiwan’s youngest-ever minister when she took the position at age 35 in 2016. She’s also the first openly transgender member of a Taiwanese cabinet.

Taiwan has kept its COVID-19 numbers low compared to other countries: It has seen fewer than 500 cases and seven deaths. Much of that success has been attributed to Taiwan's approach to technology.

Tang joined The World’s host Marco Werman from Taipei to explain how Taiwan is managing the virus.

How have you actually used technology to approach the COVID-19 pandemic?

Well, the most important technology is soap and alcohol hand sanitizers. But in Taiwan, we see democracy itself as a technology. And the counter-pandemic effort is mostly about getting people understanding the science and the epidemiology so that people can innovate and wash their hands more vigorously, wear a mask to remind oneself to keep their unwashed hands away from their faces, and making sure that each pharmacy has sufficient supply. And of course, there's also the border quarantine.

The border quarantine? Explain that.

Yes. Anyone returning to Taiwan has two choices. Either they go to a quarantine hotel for 14 days, in which case they're physically barred from leaving; or, if they live in a place with their own bathroom and with no vulnerable group of people, they can also choose to digitally quarantine, placing their phone into the digital fence. In that case, the nearby cellphone tower will measure the signal strength, as they always do, and send out an SMS whenever the phone runs out of battery or breaks out of the 50-meter or so radius. So, the idea is that during those 14 days, we pay each person in quarantine about $33 a day as a stipend. But if they break out of the quarantine, then they pay us back a thousand times that. So, very few people break the quarantine.

There was a person named Howard Wu in Tainan city who developed a map so that people could see the nearby places and exactly how many masks there are in stock. So, we very quickly supplied them, every 30 seconds, the real-time mask levels of all the pharmacies, and later on convenience stores, so that people who queue in line can keep this system accountable.

And it's not just with COVID-19, I understand. Even before you were appointed digital minister of Taiwan, Taiwan had a history of using technology to really listen to and support its citizens. Can you walk us through what that looks like?

Yeah, definitely. So, one of the most popular maps that shows the mask availability has been modified from the AirBox map. The AirBox is an inexpensive [less than $100 USD] measuring device to measure the air quality. So, many primary school teachers, people who volunteer their balcony, and so on join in this data collaborative effort to make sure that we can map out air quality together. Eventually, it helped people to develop air models and so on, and to measure not only air quality but also water quality, earthquake prevention, advance SMS warning and disaster relief and things like that in a crowdsourced way. And by crowdsourcing, I mean that people become data consumers. It’s not just media literacy, as in consumers of data — but rather media competency, as in producers of data.

What do you think can go wrong with crowdsourcing? I mean, what's the downside to it?

A couple of things. First, if we design crowdsourcing so that it replaces face-to-face deliberation, then it runs the very real risk of excluding people who are suffering the most, who are closest to the pain. So, that's why our crowdsourcing is always in augmentation of face-to-face consultation.

And the second thing is about equality. In Taiwan, broadband is a human right. Even on the tip of Taiwan, which is almost 4,000 meters high, people still have 10 megabits per second at just $16 per month. No additional cost, unlimited data. Otherwise, it's my fault. And so, we will not systemically exclude people who don't have broadband.

When I think about this intersection specifically of public health and technology — philosophically, what would you say is Taiwan's motivation?

Well, I used to tweet that in democratic Taiwan, ministers trust you. And radically trusting the citizens, I think, is the main philosophy. Because we're a very young democracy, having the direct presidential election only in 1996, we see democracy itself as a set of technologies that we can tweak and improve so that it’s not just about a few people talking to millions of people but rather listening to millions of people.

So, one lesson there, I think, is that transparency helps build trust.

You know, I think transparency in the scientific domain, of course, is paramount, but it also helps to make it fun. For example, our Central Epidemic Command Center, the CECC, has this spokesdog, Zongchai, that translates each physical distancing rule into very funny dog memes. It’s a real Shiba Inu that lives with the participation officer of the Ministry of Health and Welfare.

And so all of this spreads very easily. Only when clarifications and science have a higher R0 value than conspiracy theories and outrage, do we actually have a chance for transparency to make an impact.

This is #Taiwan's health ministry's Shiba Inu "spokesdog" Zongchai, advising you on the #coronavirus outbreak. Looks like a good boy.
In contrast to Beijing's effort: https://t.co/Cz1dBcDojE pic.twitter.com/EXtPSuVDNw

How much of this spirit of innovation and creativity in Taiwan —and don't be humble  — how much of that spirit in Taiwan is credited to you?

Well, I think very few of them are my idea. I guess journalists, especially foreign journalists, really do credit a lot to me, maybe because I run a pretty good Twitter account. But I still think that I'm merely amplifying the people's best ideas. I'm here so that people can place their trust in a well-earned trustworthiness institution. That is to say, people come up with social innovations, regardless of whether it's, for example, using a traditional rice cooker to disinfect a mask, or that they think that the CDC medical officer should wear a pink medical mask to support boys who don't want to go to school because all they have is pink medical masks — and the officer actually did wear a pink mask — and all this, I think, is just those great ideas. I'm merely someone who maintains the operating system so that this institution can respond in a more agile fashion.

So, let me get that straight. You can sterilize a medical mask in a rice cooker?

Yeah, in a traditional rice cooker. That's exactly right. See my Twitter for how.

You've got a really compelling life story, Audrey. You were the youngest person ever appointed to a cabinet position in Taiwan at the age of 35. Did you think of yourself as a political person when you first started out in tech?

Well, I think I'm more of a "poetician," meaning that I’m just writing some poetry. I’m making sure that people understand the philosophical underpinnings of modern technology. So, for example, instead of Internet of Things, I talk about Internet of Beings. Instead of machine learning, I talk about collaborative learning. Instead of singularity, I talk about plurality, and so on. And that's really my main work in the free software community. And now, I guess, in the liberal democratic community.

So, calling yourself a poetician, I'm not surprised to know that you're also pretty in tune with meditation, Daoism specifically. How do you think that helps you as a member of government?

One of the central tenets of Daoism is this way of not doing. When we in the government try to do something, we kind of limit the public sectors’ imaginations. That is to say, when career public servants are deprived of the freedom to innovate because the high-level politicians think they know best, we lose a very important ally in connecting with the public. So, not doing is the most important thing.

I understand you're a big fan of Leonard Cohen. Do you have a song quote from the late Mr. Cohen for this moment where trust is the cement that keeps it all together?

Sure. It comes from the song “Anthem": Let’s ring the bells that still can ring. Forget our perfect offering. There's a crack, a crack in everything. And that's how the light gets in.