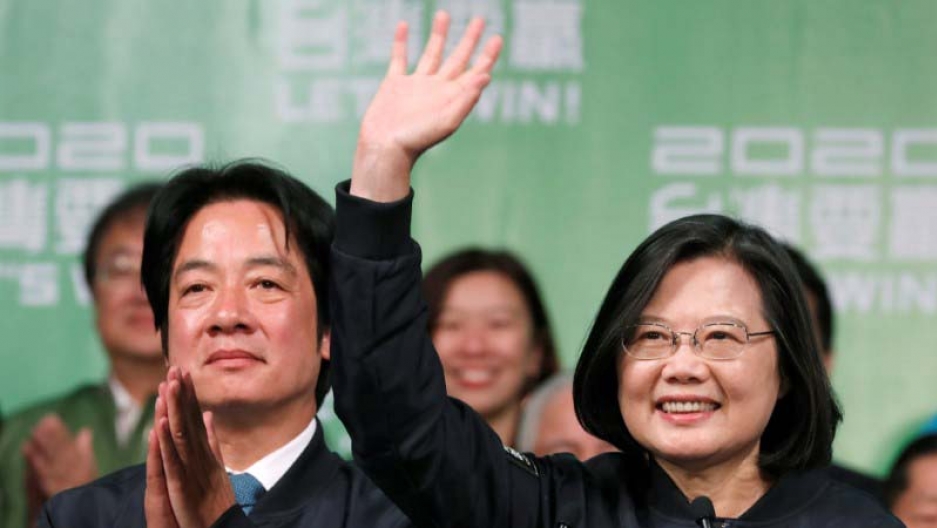 Incumbent Taiwan President Tsai Ing-wen, right, and Vice President-elect William Lai wave to their supporters after their election victory at a rally, outside the Democratic Progressive Party (DPP) headquarters in Taipei, Taiwan, on January 11, 2020.

The results of Taiwan’s 2020 presidential election illustrate that China has failed to appeal to young people in Taiwan.

President Tsai Ing-Wen was re-elected for a second term on Jan. 11, winning by a landslide after a campaign in which she focused heavily on the rising threat from Beijing and rejected China’s “one country, two systems” model. The Chinese Communist Party has long claimed sovereignty over Taiwan and the right to take it by force if necessary.

Over the years, China has sought to appeal to young people as a means of facilitating the political unification of Taiwan and China without waging a costly war. At the same time, Taiwanese identity — distinct from a Chinese identity — is on the rise among young people.

Ahead of the election, there were fears that declining voting rates — particularly among young people — would lead to the victory of the opposition Kuomintang party (KMT) party and its presidential candidate Han Kuo-yu, who campaigned on a more conservative agenda, not to mention the party's belief that Taiwan is an inseparable part of China. KMT’s constituency was made up of older voters, who have higher rates of voting. As Taiwan’s electoral system does not allow for absentee ballots and instead requires voters to return to their place of household registration in order to vote, it was feared that this would further decrease the number of young voters.

Indeed, it was apparent to Tsai’s Democratic Progressive Party (DPP) that the youth vote would be crucial for its electoral success. As a result, the party put a great deal of resources into appealing to young people in its campaign advertising, calling on them to return home to vote and endorsing the “Democracy Frontline” inter-party alliance of young candidates. While the party also directed outreach toward older voters, seeing as old people outnumber young people in Taiwan at a time in which Taiwanese society is increasingly aging, a DPP victory would have been improbable without the support of Taiwanese young people.

But it has also been clear to the Chinese government in past years that it will never realize unification if it cannot win over young people in Taiwan. As such, Beijing has strengthened efforts to reach out to young people since the 2014 Sunflower Movement, the monthlong occupation of the Taiwanese legislature by student activists. Student activists occupied the legislature to protest a free trade agreement to be signed with China that would have allowed for Chinese investment in Taiwan's service sector industries. It was feared that this would harm Taiwan's political freedoms.

Related: China warns of war in case of move toward Chinese independence

China’s outreach has primarily taken the form of offering economic incentives toward young Taiwanese entrepreneurs seeking to start businesses, such as providing funding for start-ups or allowing Taiwanese citizens similar regulations to those for Chinese citizens in seeking loans, owning property, or investment. In line with a similar policy aimed at Hong Kong, the Chinese government believes that “separatist” sentiment may die down if Taiwan is kept economically pacified.

But Taiwanese youth haven’t been swayed. 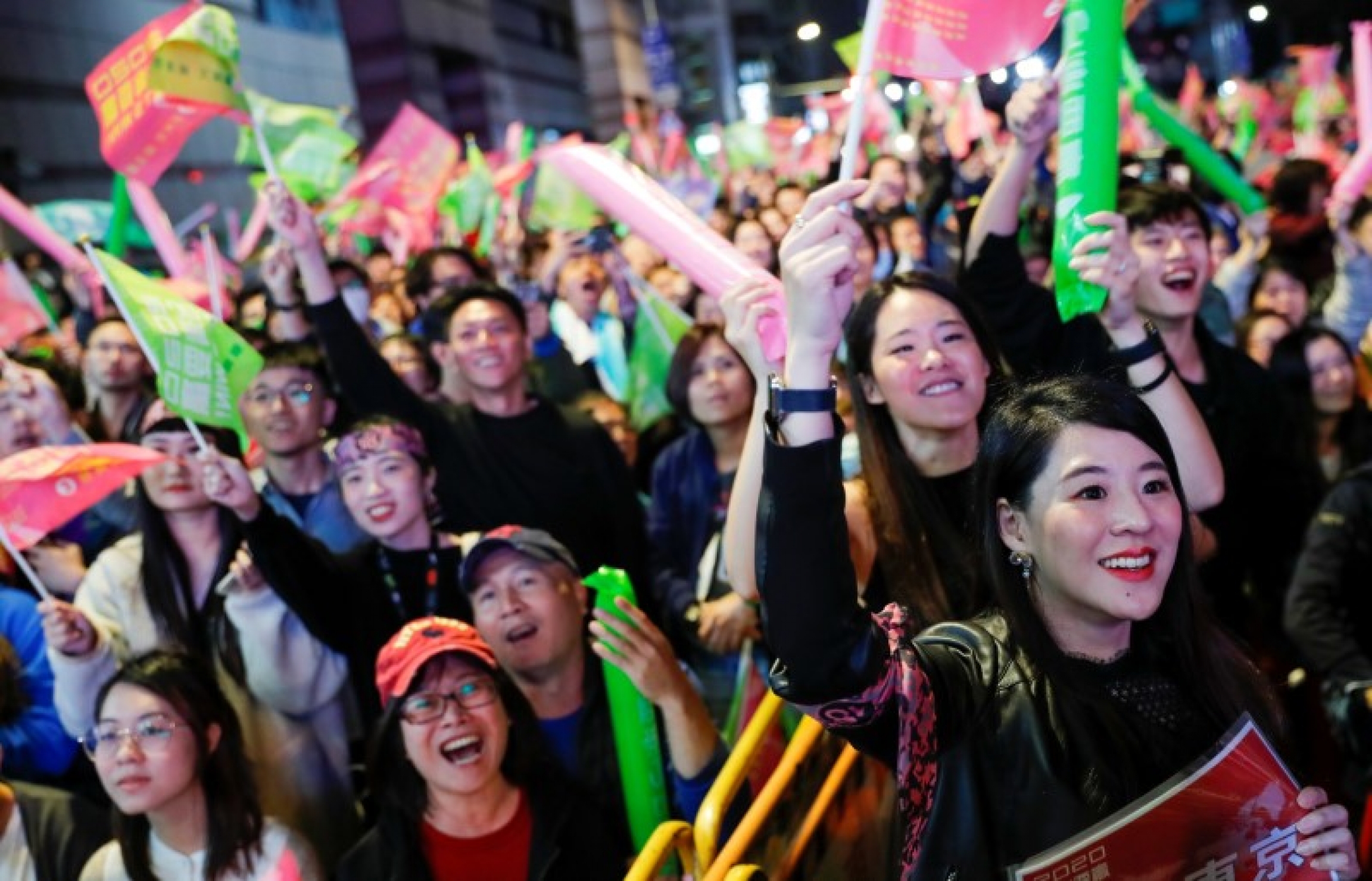 Supporters of Taiwan President Tsai Ing-wen react during a rally outside the Democratic Progressive Party (DPP) headquarters in Taipei, Taiwan, on January 11, 2020.

"We're different than the Chinese people that grew up behind the Great Firewall, always in danger of threats from the government for what they say,” said Renata Zhang, 26, a website designer.

Her sentiments were echoed by Jasmine Chan, 25, a student at National Taiwan University. “The Chinese government's violation of human rights should be strongly criticized,” Chan said. “Their actions show the distance between Taiwan and China, as well as our cultural differences.”

The Chinese government has sought to improve China’s image in Taiwan. First, China is thought to have conducted social media-based disinformation campaigns intended to create positive perceptions of China in Taiwan, by drowning out negative views of China through content farms that produce positive news content about China.

What's more, pro-China media outlets in Taiwan, which may take funding from China or in which China has a direct say in the editorial direction, seek to keep negative press about China out of the news. This is also a way to prevent Taiwanese from being aware of current events, such as the mass detention of Uighurs in Xinjiang, the ongoing protests in Hong Kong which have raged on for over half a year, or even China’s currently slowing economy, instead keeping Taiwanese focused on the perception of China as a rising economic and political superpower that dwarfs Taiwan.

More generally, China undercuts its own efforts at creating a better image for itself in Taiwan through its military threats. This is visible in the surge in Tsai’s approval rating after a speech by Chinese president Xi Jinping in January of last year, when Xi reemphasized the use of force if Taiwan resisted efforts at achieving unification. To this extent, China sailed its aircraft carrier, the Liaoning, through the Taiwan Straits before the election as a show of force.

Of course, China will keep trying to win the hearts and minds of Taiwanese young people. But it remains to be seen which measures, if any, will work.

For Tsai’s part, her election shows how little of an appetite there is for a “One China” concept. China needs to “face reality” and show Taiwan respect, she told the BBC in an interview last week.

"We have a separate identity and we're a country of our own. So, if there's anything that runs counter to this idea, [the youth] will stand up and say that's not acceptable to us.”