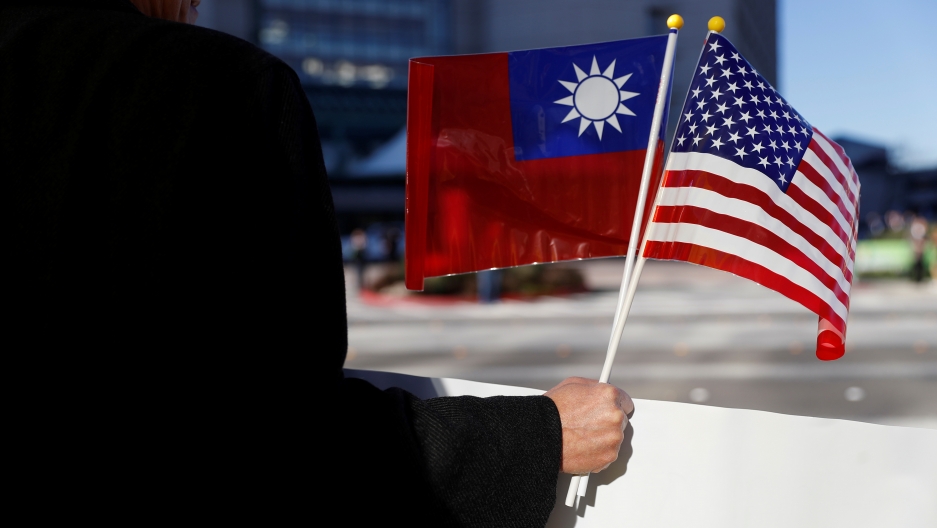 A demonstrator holds flags of Taiwan and the United States in support of Taiwanese President Tsai Ing-wen during an stop-over after her visit to Latin America in Burlingame, California, Jan. 14, 2017.

China warned on Wednesday that it was ready for war if there was any move toward Taiwan's independence, accusing the United States of undermining global stability and denouncing its arms sales to the self-ruled island.

The Pentagon said this month the US State Department had approved sales of weapons requested by Taiwan, including tanks and Stinger missiles estimated to be worth $2.2 billion.

China responded by saying it would impose sanctions on US firms involved in any deals.

Defense ministry spokesman Wu Qian told a news briefing on a defense white paper, the first like it in several years to outline the military's strategic concerns, that China would make its greatest effort for peaceful reunification with Taiwan.

"However, we must firmly point out that seeking Taiwan independence is a dead end," Wu said.

Related: China is clamping down on dirty recycling from across the globe

"If there are people who dare to try to split Taiwan from the country, China's military will be ready to go to war to firmly safeguard national sovereignty, unity and territorial integrity," he said.

The United States is the main arms supplier to Taiwan, which China deems a wayward province. Beijing has never renounced the use of force to bring the island under its control.

The United States has no formal ties with democratic Taiwan, but is bound by law to help provide it with the means to defend itself.

"We urge Beijing authorities to renounce irrational, malicious acts such as the use of force, and to improve cross-strait relations and handle issues including Hong Kong rationally, so that it can be a responsible regional member," it said.

In Beijing, asked how China's military would handle escalating protest violence in Hong Kong's widening crisis over a controversial extradition bill, Wu referred only to the territory's garrison law, which he said "already has a clear stipulation."

Related: He had a dream life in Seattle. Then Taiwan's military came calling.

But legal scholars say it is a very high threshold, and some retired security officials say any involvement by PLA units in Hong Kong security would shatter the "one country, two systems" formula under which the former British colony returned to China in 1997.

Wu also said reports of a secret pact with Cambodia granting China's armed forces exclusive access to part of the Southeast Asian nation's Ream Naval Base on the Gulf of Thailand were "not in accordance with the facts".

"China and Cambodia have in the past carried out positive exchanges and cooperation on military drills, personnel training and logistics," he said. "This kind of cooperation does not target any third party."