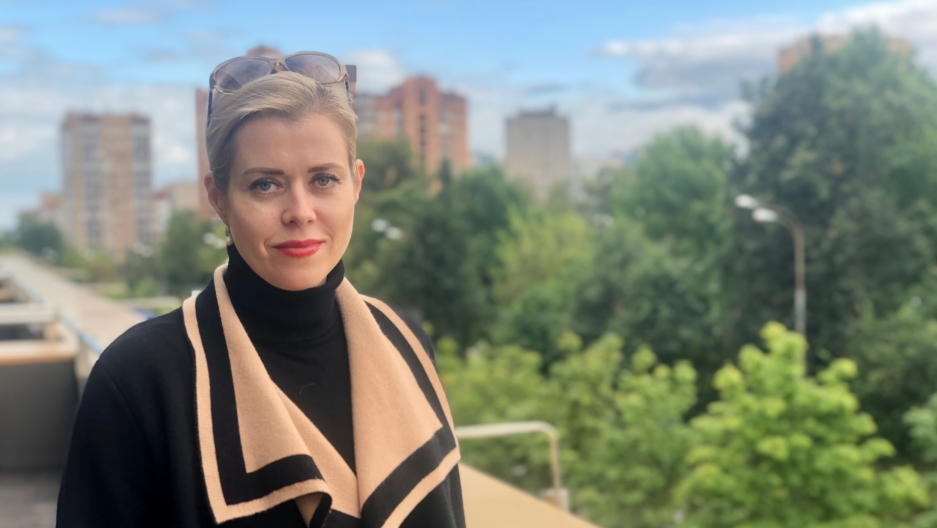 Belarusian opposition figure Veronika Tsepkalo stands on a roof deck in Moscow while in exile from her country.

Editor's note: This is the fuller version of our interview with Veronika Tsepkalo that aired on Aug. 14.

On Sunday, Belarusian President Alexander Lukashenko won his sixth reelection in a landslide. He's ruled the country since 1994. But many have called it a rigged vote.

Mass protests in Belarus have been met by violent crackdowns. Lukashenko's main challenger, Sviatlana Tsikhanouskaya, escaped to Lithuania earlier this week, as have many of her close political allies.

Veronika Tsepkalo, who helped create one of the largest expressions of dissent Belarus has seen in years, joined The World's host Marco Werman from exile in Moscow to talk about the latest events.

Marco Werman: For you and the Belarusian people, this seems to have been a life-changing week —starting with the election last Sunday, to the ongoing protests. What are you feeling about all that's happened?

Sviatlana Tsikhanouskaya fled to Lithuania earlier this week. A lot of her allies did, too, as did you. You're in Moscow, now. Why did you leave Belarus?

Well, actually, I came to Moscow on the day of the election. I didn't get a chance to see my kids for several weeks. My entire family, my husband and the kids, had to leave Belarus several weeks before because [they] put pressure on my kids. My husband was put under the pressure. He was facing criminal charges and they started the procedure of taking away my kids. So that's why they had to leave several weeks ago to the Russian Federation. That's why I decided to come to Moscow, and vote with my kids in the Belarus Embassy of the Russian Federation. So, I did vote because I think it was a historical moment for Belarus. And the same day, I left back to Belarus. I spent one day in Belarus, but I was told, as well, that I was going to be put in jail. That's why I decided to leave [again], because I think I can do more being in Moscow, being free, and being able to speak up for Belarus' people to the international community.

Even before the elections, you felt pressure from the Lukashenko government. Are you safe in Moscow? I mean, what's the relationship like between Vladimir Putin and Alexander Lukashenko?

Well, actually, I do not look at the relationship between Vladimir Putin and Alexander Lukashenko. I'm here temporarily. Hopefully, I will be back to Belarus, because I really want to go back home. I want my kids to start school as of Sept. 1 in Minsk in Belarus. Hopefully, the changes will occur in Minsk and Sviatlana Tsikhanouskaya will be acknowledged as the only acting president of the Republic of Belarus as of Aug. 9, 2020.

Of course, Sviatlana Tsikhanouskaya is also in exile, in Lithuania. There are reports that she was threatened by Belarusian authorities. Have you been able to speak with Tsikhanouskaya in the last couple of days?

Yes, we do stay in touch with Tsikhanouskaya. Indeed, she was put under pressure by the Belarus authorities. She was kept in the government office for up to seven hours. They put a lot of pressure on her. They were threatening her. She never told me what the threat was all about. But I'm sure it was very dangerous, very harsh,  because if you look at her [video] address the next day, you will see the tears in her eyes. You will hear her voice shaken. So that's why she had to leave Belarus, for her own safety and for the safety of her kids. At the same time, please keep in mind that Sviatlana Tsikhanouskaya's husband is still in jail. Belarus' government uses her husband as a hostage to put pressure on Sviatlana. So, they use all possible and impossible ways to get rid of the strong candidates in Belarus. This is how the Lukashenko regime works, unfortunately.

How big a problem is it that the leaders of this movement like you, like Tsikhanouskaya, are in exile? And when do you think Sviatlana Tsikhanouskaya will actually return to Belarus?

Hopefully, she will return to Belarus very soon, when Lukashenko leaves Belarus, because Lukashenko is [the] illegal president of the Republic of Belarus. Lukashenko is not able to present our country in the international arena. The only legitimate president is Sviatlana Tsikhanouskaya. And that's why she submitted a petition to the government, to the authorities, because we do not recognize the election results. So, hopefully, Sviatlana will come back soon to Belarus and Lukashenko will leave Belarus.

What did Tsikhanouskaya tell you in the last couple of days about how she's doing personally with what's transpired in Belarus?

I spoke with her last night. And she's doing much better now. Of course, as I said, she was put under huge pressure and it took her some time to recover because the authorities were threatening her, threatening her husband. She's very worried about Siarhei Tsikhanouski, her husband. She was very worried about the kids, but now she's getting better. If you saw today, she released one more address to the Belarus people. And when you look at her, you will see that she's much, much better now. I know Sviatlana, she's a very strong person. She has a very strong personality. And I'm sure she will be fine.

In terms of a way forward for Belarus, is there a solution to this conflict, this deadlock? It seems like Alexander Lukashenko has no plans of giving up power.

We don't care about Mr. Lukashenko's plans. But a lot of people, if you look at the peaceful demonstrations, peaceful protests in Belarus, which are happening for the last four days, the people of Belarus don't want Lukashenko any longer. And we appeal to the international community, to the heads of all of the different countries, not to recognize Lukashenko as acting president of the Republic of Belarus. So, we really hope that Lukashenko changes his mind and leaves Belarus as soon as possible — because the people of Belarus do not want him any longer.

What can you say about the response of the police and military in Belarus? It's really concerning because witnesses say the authorities treat them like they're not even citizens. That's how brutal the crackdown has been. But there have reportedly been calls that the military should break ranks. How likely do you think that is?

It was awful. If you saw the videos or if you saw the pictures from Belarus — what is happening in the streets — it's not acceptable. The policemen, the law enforcement agencies, are so cruel. They arrested around 3,000 people, who they put in prison. They were beating them up with batons. It's horrible. When I look at these pictures, I always cry because I cannot accept that this is what's happening in my home country in the 21st century. There are several opinions about why this is happening. The first opinion is that the police forces are under medication or under some kind of drug because when you look at their eyes, their eyes look like Nero, [a glassy-eyed emperor], — not like a live human being. And the other opinion is that the Lukashenko regime made them that cruel and ready to beat up the people of Belarus. Like they're ready to kill [civilians]. They're ready to wound them. It's like torture. Belarus' jails look like concentration camps during World War II.

Is there a risk of more violence and bloodshed? And if there are sanctions, could violence increase?

Well, hopefully, there will not be violence. Hopefully, the violence will stop in Belarus. I reach out to the law enforcement agencies, the policemen, every day. I usually address my pain. I talk to the policemen of Belarus and ask them to stop the violations because people are not doing something wrong. We're just fighting for our constitutional rights — to vote, to elect and be elected. People are just doing this peaceful protest without breaking any law. And this should not be punished like this. And really, my heart and my soul is broken from what I'm seeing, what is happening in Belarus.

Are the Belarusian people determined to end Lukashenko's regime? Do they want a peaceful end, with him just voluntarily walking out of the presidency?

They want Lukashenko to leave. That's all. Belarus' people, they're ready for changes. They want new elections because if you look at Sviatlana Tsikhanouskaya's election program, the first point is to announce the release of all political prisoners and economic prisoners from the prison. And the second one is to announce new presidential elections, where all candidates will be able to participate, because, during this [recent] presidential campaign, Lukashenko put into prison two strong candidates: Siarhei Tsikhanouski and Viktor Babaryko. And we want them to be released. We want them to be free. And we want to announce new elections with all the candidates able to participate without any fear.

These protests are roiling the entire nation of Belarus. What do you think Belarus will be a year from now?

If the situation changes — and we hope that the situation will change — Belarus will be a free country with basic human rights. We will be able to have free meetings, free speech, free mass media. And we just all hope that Belarus will become a safe country because now with this, the country is not safe. We are all afraid for our kids. Lukashenko's regime just made us leave Belarus. And as I said, we would like to live in Belarus. We would like to raise our kids in Belarus. We don't want to leave. We don't want to emigrate to any other country. So, hopefully, once he leaves, Belarus will breathe freely — for the first time in 26 years.