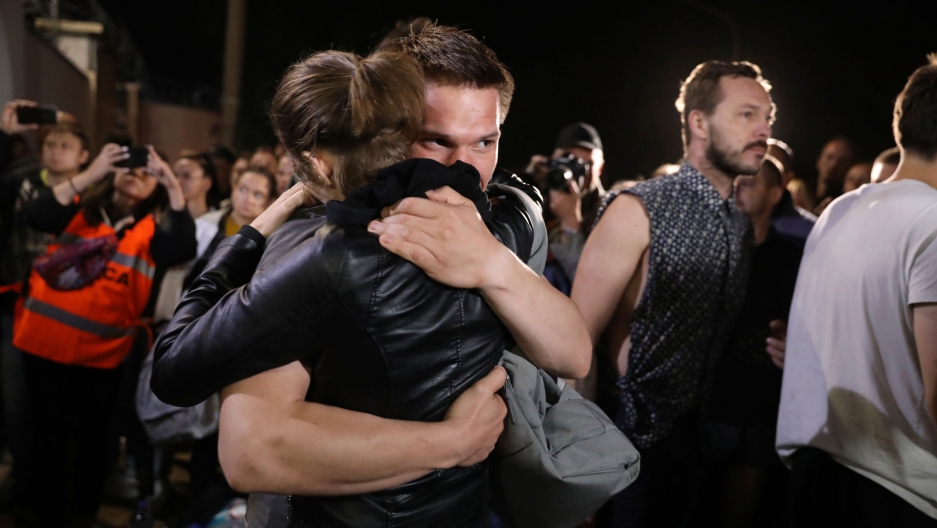 A couple hugs after being released from a detention center where protesters were detained during a demonstration following presidential election in Minsk, Belarus, Aug. 14, 2020.

In a moved assuage public anger against a brutal crackdown on peaceful protests and avoid Western sanctions, Belarusian authorities have released about 1,000 people detained amid demonstrations contesting the results of the controversial presidential election.

Crowds of demonstrators have swarmed the streets daily to contest the official results of Sunday's vote that showed authoritarian President Alexander Lukashenko extending his 26-year rule with 80% of the vote.

Nearly 7,000 people have been detained and hundreds injured since Sunday as police have ferociously dispersed the demonstrations with stun grenades, tear gas, rubber bullets and severe beatings.

Many of those who were released talked about brutal beatings and other abuse at the hands of police, and some showed bruises. Some wept as they embraced their relatives.

The releases come as European Union foreign ministers are due to meet to discuss possible sanctions against Belarus. As thousands of protesters again rallied across Belarus on Friday, Lukashenko's main challenger, Sviatlana Tsikhanouskaya, who has been given refuge in neighboring Lithuania, posted a video statement contesting the results of the vote and demanding that the government launch a dialogue with protesters. 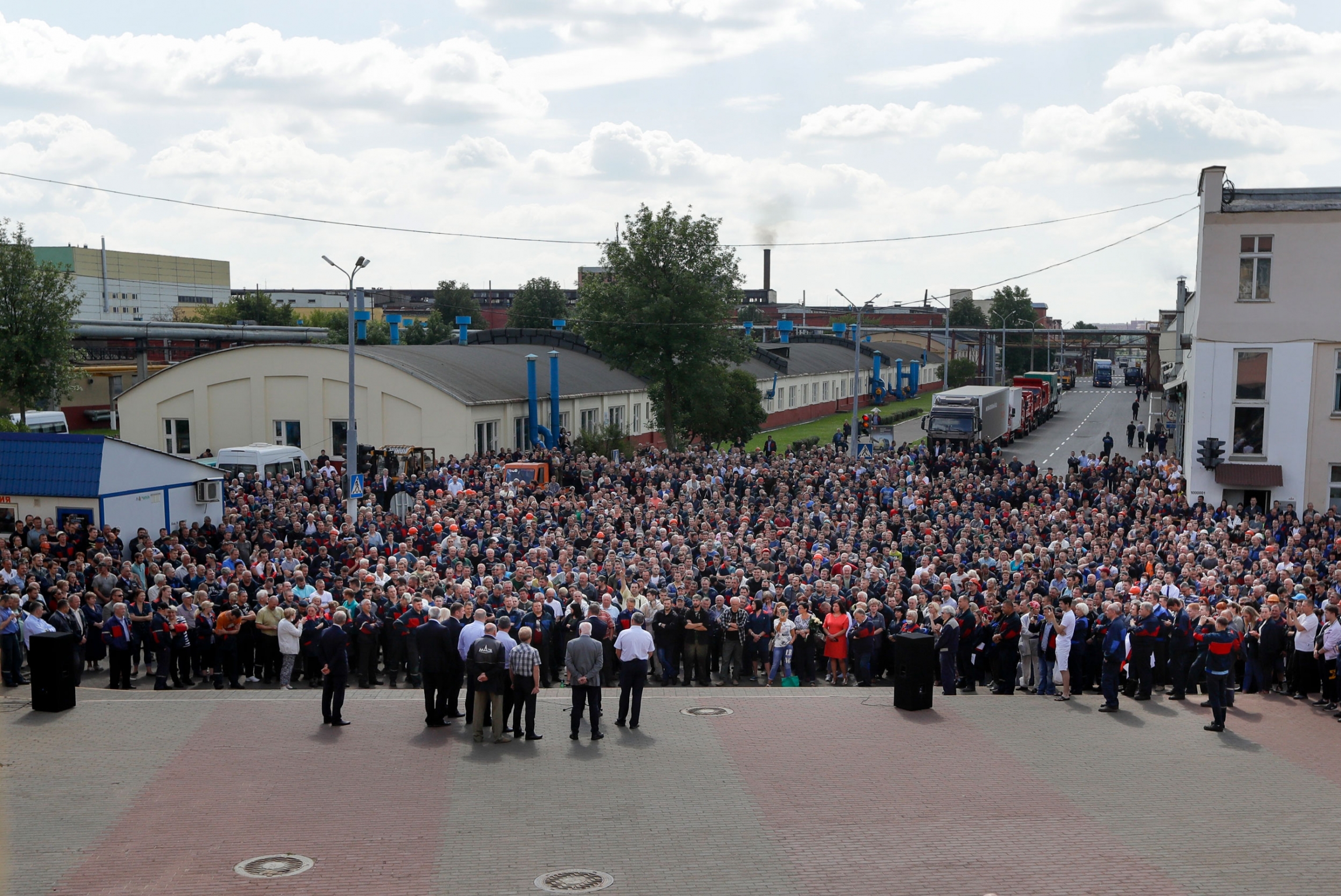 Workers gather during a rally at the Minsk Automobile Plant in Minsk, Belarus, Aug. 14, 2020. Workers at the plant demanded a new election and called for the release of all those who were detained in a brutal police crackdown on demonstrators challenging the official results of Sunday's presidential vote.

Thousands of workers have joined the protests, denouncing the police crackdown and demanding a new election, raising the prospect of a nationwide strike.

"Our entire shop voted against Lukashenko and then we suddenly learned that he won by a landslide," 42-year-old assembly worker Dmitry Glukhovsky said outside the Minsk Automobile Plant. "They not only have cheated us but also beaten us up, and no one is going to accept that."

He said that his assembly shop went on strike Friday to demand a new election. More than 1,000 workers could be seen in the factory's yard, shouting "Down!" in a call for Lukashenko to resign.

Another factory 45-year-old electrician Viktor Konovalov said his friend has been detained during the clampdown.

"People will not forgive that," he said. "We don't need their excuses, we need a new election and a new government.

Similar actions have swept many other major factories in an unprecedented challenge to Lukashenko, who has been in power since 1994 and earned the nickname of "Europe's last dictator" for his relentless crackdown on dissent.

Clearly nervous, the Belarusian leader, warned Friday that the strikes would deepen the damage inflicted by the coronavirus pandemic and could lead to Belarus losing its niche in global markets amid intense competition.

"Everyone is fighting for markets, and if we stop we will never be able to resume production," he said. "You must explain it to the people."

He didn't directly address the election and the subsequent protests, but the Belarusian upper house speaker Natalya Kochanova said late Thursday that more than 1,000 detainees had been released earlier in the day following Lukashenko's order to law enforcement agencies to look more closely into the detentions.

Valiantsin Stefanovich of the Viasna rights center confirmed that about 1,000 people have been released from jails in Minsk and Zhodino,

"The authorities are obviously trying to de-escalate the situation and ease the tensions, fearing that the furious industrial workers will take to the streets all across Belarus," Stefanovich said.

After a violent crackdown, police stood back Thursday as thousands of people formed "lines of solidarity" in Minsk and other cities.

Women, many of them dressed in white and carrying flowers and portraits of detained loved ones, spearheaded the human chains as motorists honked in support. Authorities again didn't interfere with the demonstrations on Friday.

Amid growing public dismay, dozens of military and police veterans posted videos in which they dumped their uniforms and insignia in the trash.

The demonstrations have spread even though the protest lacks leaders. Tsikhanouskaya abruptly left for Lithuania on Tuesday, calling on her supporters to stop protests in a video that her associates said was recorded before her departure under pressure from law enforcement officials. The 37-year-old former teacher had joined the race to replace her husband, an opposition blogger, who has been jailed since May.

In a new video statement released Friday, Tsikhanouskaya again challenged Lukashenko's victory, saying that copies of protocols from precincts where the vote was counted fairly show her winning 60-70% of the vote. She urged the government to end violence and engage in dialogue with protesters.

"The Belarusians will never want to live under the current government," she said. "The authorities have turned peaceful demonstrations into a blood bath."

A protester died Monday in Minsk when, according to the Interior Ministry, an explosive device he tried to throw at police blew up in his hand. Media reports challenged the ministry's claim, alleging that he was killed by police. The place where he died quickly turned into a pilgrimage site, with hundreds of people, including European ambassadors, laying flowers there.

The authorities said that a detainee died in the southeastern city of Gomel, but the circumstances of his death weren't immediately clear.

The brutal suppression of protests drew harsh criticism in the West.

Ahead of the meeting of EU foreign ministers to discuss sanctions against Belarusian officials responsible for the crackdown, German Chancellor Angela Merkel's spokesman Steffen Seibert told reporters in Berlin that the peaceful protests "reflect the dissatisfaction, the anger and the desperation" of people in Belarus and that the government's crackdown was "completely unacceptable."

In an attempt to ease Western criticism, Belarusian Foreign Minister Vladimir Makei said in a phone call with his Swiss counterpart that the country is ready for a "constructive and objective dialogue" with foreign partners on all issues related to the election and subsequent events.