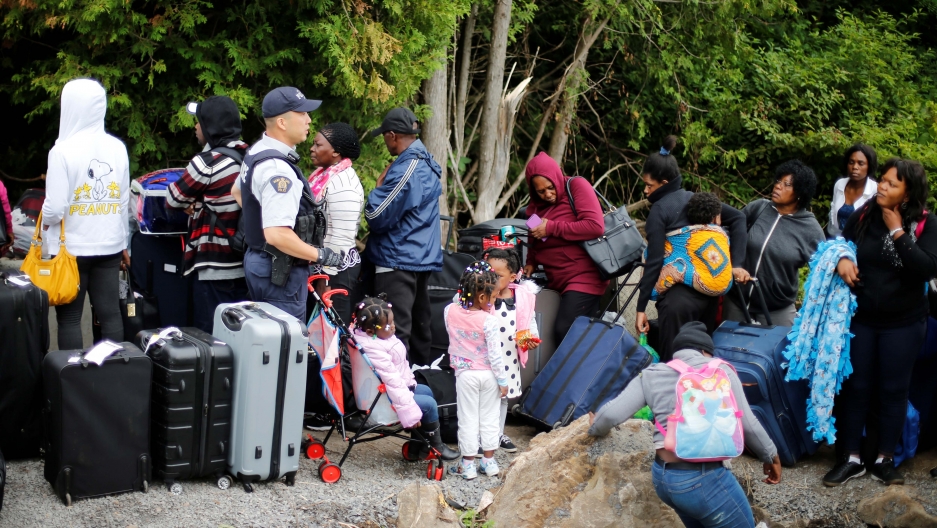 A Royal Canadian Mounted Police (RCMP) officer announces to a group of asylum-seekers that they will be crossing illegally into Canada as they wait in line to to enter at the US-Canada border in Champlain, New York, Aug. 7, 2017.

Jonathan, an asylum-seeker from Haiti, has a collection of bus tickets from his trip last fall from Florida to the US-Canada border. The last bus dropped him off in Plattsburgh, New York, a little over 20 miles from Canada. Then, he took a taxi to the border.

But he didn’t go to an official border crossing. Instead, he followed instructions from other asylum-seekers.

“My friend sent me every [piece of] information,” said Jonathan, who asked to use only his first name because his asylum case is pending.

That information included videos posted online of an informal crossing point north of Plattsburgh. The spot, a country road that reaches a dead end in a gravel patch at the border, has become so popular with asylum-seekers that police now wait, 24/7, on the Canadian side to detain new arrivals.

But like tens of thousands of other asylum-seekers trying to reach Canada from the US in the past four years, Jonathan took this route to avoid a bilateral deal between the two countries known as the Safe Third Country Agreement. Signed in the wake of 9/11, the deal allows both the US and Canada to turn back asylum-seekers who present themselves at official border crossings if they first passed through the other country. In practice, it has more frequently impacted asylum-seekers arriving in Canada after having lived in or transited through the United States.

Related: Canadian court weighs whether the US is safe for asylum-seekers

Alex Neve, secretary general of Amnesty International Canada, which was a party to the legal challenge, explained that those who do arrive at the US border at official crossing points and are turned back are returned to US border agents.

“You may very well end up in detention for an extended period of time. In immigration detention centers, sometimes commingled with criminal convicts. That’s very commonplace.”

“You may very well end up in detention for an extended period of time. In immigration detention centers, sometimes commingled with criminal convicts. That’s very commonplace,” Neve said.

In her ruling Wednesday, Canadian Federal Court Justice Ann Marie McDonald focused on the experience of plaintiff Nedira Mustefa, an asylum-seeker who is originally from Ethiopia.

After being turned back from Canada, Mustefa spent a month in a New York county jail, which included time in solitary confinement until she was released on bond. Unable to get halal food in jail, Mustefa lost 15 pounds.

However, she continued: “Canada cannot turn a blind eye to the consequences that befell Ms. Mustefa in its efforts to adhere to the [Safe Third Country Agreement].”

The ruling leaves the agreement in place for the next six months to allow the government to respond. Amnesty International Canada and the Canadian Association of Refugee Lawyers have urged Prime Minister Justin Trudeau's government not to appeal.

Mayor of Plattsburgh, Colin Read, says that despite the notoriety of the back road where Jonathan crossed, some families still approach official border crossings because they either do not know of the agreement or think they fall under exempted categories.

The first family of asylum-seekers he encountered back in 2017 had tried to apply for asylum at the Champlain–St. Bernard de Lacolle border crossing, a half-hour drive north of Plattsburgh, New York.

According to Read, the father of the family had $2,000 in his pocket to begin what the family hoped was a new life in Canada. Turned back from Canada as ineligible to enter and apply for asylum, he was detained by US border officers who found the sum suspicious.

Eventually, Read said, “He’s … transported to Buffalo, which is the main [immigration] detention center in our region, and there's a wife and a bunch of kids in hand with no place to go.”

Their situation became the catalyst for locals to form a group called Plattsburgh Cares, which has provided support to immigrants attempting to reach Canada in increasing numbers since the start of the Trump administration.

Those, like Jonathan, who cross between official ports of entry — having reached Canadian soil — have the right to apply for asylum. Jonathan is now living in Montreal while awaiting his asylum decision.

These irregular border crossers became politically contentious in Canada, with some politicians characterizing them as rule breakers. If the Safe Third Country Agreement lapses, they will be allowed to apply for asylum at normal border crossings.

A spokesperson for Canadian Public Safety Minister Bill Blair said Wednesday that the government is “currently reviewing” the decision.

Craig Damien Smith, associate director of the Global Migration Lab at the University of Toronto, noted the six-month suspension expires just days after the US presidential inauguration in January.

“The big question is whether or not more people will decide to come as a result of this decision. We don't know that,” he said. “It's very difficult to say. And I think that much of this will depend on what happens in the November election.”