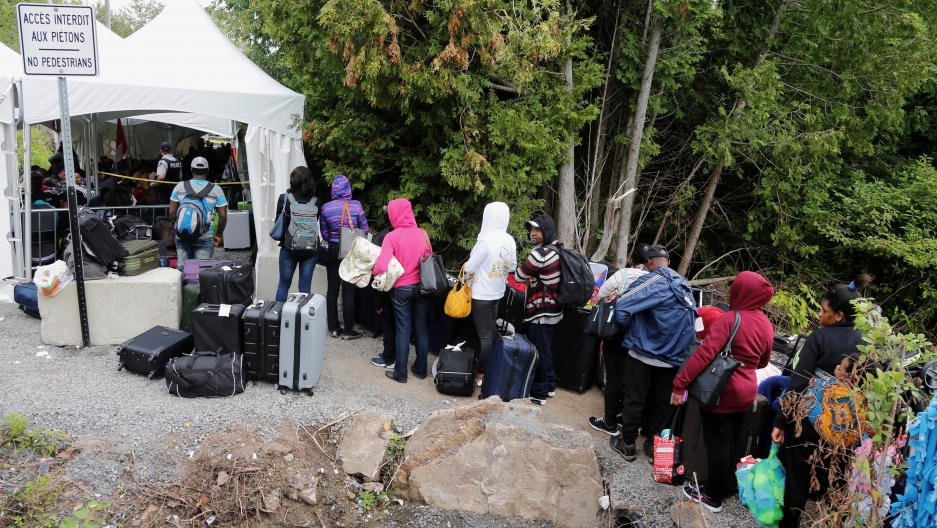 A line of asylum-seekers who identified themselves as from Haiti wait to enter into Canada from Roxham Road in Champlain, New York, Aug. 7, 2017.

This week, a federal court in Toronto, Canada, is hearing from plaintiffs arguing the US is not a safe place for asylum-seekers.

The lawsuit concerns a “safe-third country” agreement that the US and Canada signed shortly after 9/11, in 2002.

Under the agreement, people who arrive in either country asking for asylum must apply in whichever country they arrive in first. So if asylum-seekers living in or transiting through the US go to a border crossing with Canada and say they want to apply for asylum there, they can be turned back — and must apply for asylum in the US instead. There are certain exempted categories, including people with close relatives in Canada. The agreement does not apply to US citizens.

Related: How Trump’s bilateral deals with Central America undermine the US asylum system

Her group, along with Amnesty International Canada and the Canadian Council of Churches, is asking the Canadian court to strike down the agreement. Their case has been joined with a group of individuals from El Salvador, Syria and Ethiopia who requested asylum at US-Canada border crossings in 2017. The hearing began Monday.

Dench argues asylum-seekers returned to the US face prolonged detention in harsh conditions and are potentially held in the same jails as criminal defendants. Seeking asylum is not a crime under US domestic and international law. Dench also points to how the Trump administration has chipped away at eligibility for asylum. Under Trump, the US has narrowed its interpretation of who qualifies for refugee status — meaning the US would deny many asylum seekers' claims despite potential dangers they may face if returned to their home countries.

“Generally speaking, people fleeing domestic violence as well as people fleeing gang violence would not meet the refugee definition, and so, that is likely to mean that many women who need protection will not be granted it in the United States.”

“Generally speaking, people fleeing domestic violence as well as people fleeing gang violence would not meet the refugee definition, and so, that is likely to mean that many women who need protection will not be granted it in the United States,” she said, adding that they could receive protection under Canada's criteria.

So, while the case may be taking place in Toronto, it’s the US immigration system that is on trial, said Craig Damien Smith, associate director of the Global Migration Lab at the University of Toronto.

“The fundamental question in front of the court is whether or not Canada should, given the policy changes under the Trump administration, consider the US a safe country for asylum-seekers, or whether we're breaching people's rights and breaching our responsibilities and obligations under the Refugee Convention,” he said.

A spokesperson for Immigration, Refugees and Citizenship Canada, a government agency, said the department can’t comment on an ongoing court case.

In its legal memorandum filed with the court, the Canadian government wrote: “Claimants are returned to a highly developed asylum system that grants protection to large numbers of persons every year, and is subject to both administrative and judicial checks and balances.”

The government also argues that many of the Trump administration’s most criticized policies at the southern US border, such as separating families and making people wait for their asylum hearings in Mexico, don’t apply to people turned back from Canada.

Related: The Trump administration extended TPS for Salvadorans. But this activist says the fight is not over.

Dench, responding to the Canadian government's stance, said, “We're talking about someone who comes to the Canadian border who asks for Canada's protection. We cannot wash our hands of that responsibility saying, ‘Oh, well, it's not a big deal, because there were other people that received refugee protection in the United States.’”

In 2017, The World spoke to a journalist from Nigeria named Precious at a refugee shelter in Montreal. Precious, who asked to only by identified by his first name for safety reasons, said his family traveled first to the US in the hopes of claiming asylum, but did not see a clear path to legal status there.

“We [were] living under the fear of deportation by the present immigration policy of US against undocumented immigrants,” he said at the time.

Believing they had a better chance of getting asylum in Canada, Precious and his family walked across the border between official ports of entry. In what’s often called a legal loophole, the safe-third country agreement only applies to people appearing at official border crossings, but does not bar people who reach Canadian soil between them from claiming asylum.

“God bless Canada because I mean, it’s a place where our fears have been relieved.”

“God bless Canada because I mean, it’s a place where our fears have been relieved,” Precious said.

Tens of thousands of people have walked across the border between official entry points in the same way since the election of President Donald Trump, bringing political backlash from some Canadians who see this as rule-breaking and skipping the line.

Some immigrant advocates have said if the safe-third country agreement is overturned, it could reduce hostility toward asylum claimants because they would be able to approach official crossing points.

Smith of the Global Migration Lab, who spent the last year collecting interviews with 290 people who crossed the border irregularly, or not at official border crossings, said word of a decision by a Canadian court to throw out the agreement could encourage larger numbers of people to come from the US to Canada, though there’s no guarantee they would win their asylum claim.

“What I'm also concerned about in this court challenge is that while it might be a win in the short term — for the rights of refugees and asylum-seekers — in the long run, that could reward anti-refugee sentiment in Canada in terms of elections, and that would be that would be a bad thing for refugees and refugee rights advocates in the long-term,” he said.

Muzaffar Chishti of the New York office of the Migration Policy Institute said this type of review of US policy in an international court is unusual.

“It really doesn't happen frequently, and I think it is safe to say that this is sort of one of the new fallouts from the policies of the Trump administration,” Chishti said.