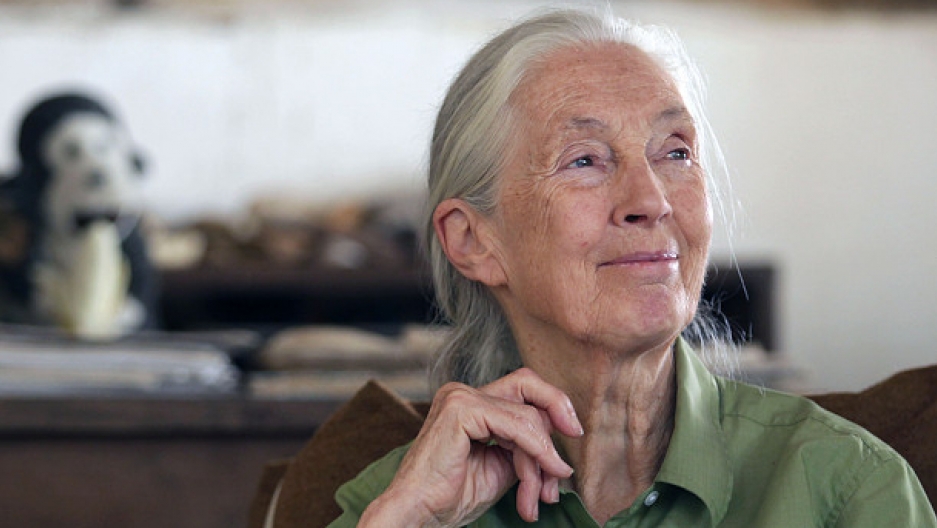 Through her speaking engagements and her Roots & Shoots program, Jane Goodall has inspired people around the globe. Goodall normally travels the world 300 days a year, sharing her story and inspiring future generations of environmentalists.

On July 14, 1960, at the age of 26, Jane Goodall arrived in what is now Gombe National Park, Tanzania, to begin her breakthrough study of wild chimpanzees. Soon after, she realized that if chimps were to survive into the future, she had best speak out on their behalf, as well as for the forests and their human stewards.

Now, 60 years on, the iconic scientist, naturalist and activist is still advocating passionately for the conservation of the natural world.

Goodall has described a pivotal moment in her life when she traveled from Gombe to a conference in Chicago. She says she arrived as a researcher and left as an activist.

“I helped to put that conference together,” Goodall says. “It was the first time chimp researchers from different field sites in Africa came together because by then, there were six other field sites. And it was mainly to see how chimp behavior differed from environment to environment or didn't differ, as the case may be.”

She attended a session on conservation and another on conditions in captive situations like medical research labs, and “it was a shock,” she says.

"I went as a scientist, I left as an activist."

“I knew there was deforestation. I had no idea the extent of it,” she explains. “I had no idea the speed with which chimp numbers were decreasing. And I certainly had no idea about what went on in the medical research labs. So I left as an activist. I didn't make a decision. I went as a scientist, I left as an activist. The first thing I had to do was make myself go into those labs because you've got to see it firsthand. And it's been a long battle, but, finally, with others helping, we have got chimps out of medical research.”

Related: Dr. Jane Goodall on her work with chimpanzees, and the new documentary ‘JANE’

In Africa, she learned about the plight facing so many of the people living in and around the chimpanzee habitat she studied. In the 1960s and 70s, Gombe was part of a great equatorial forest belt that stretched from western East Africa to the west coast of the continent.

“When I flew over in 1990, it was just this little island of trees surrounded by completely bare hills,” Goodall says. “People struggling to survive — more than the land could support; too poor to buy food from elsewhere. This is when it hit me: If we don't help them find ways of making a living without destroying the environment, then we can't even try to save the chimpanzees. That's where we began our Tacare program, which is our method of community-based conservation.”

The Tacare program helps both local communities and conservation in several ways, such as using microcredit, based on Muhammad Yunus' Grameen Bank model.

“The women — particularly the women — take out tiny loans for their own environmentally sustainable projects, like getting a few chickens, selling the eggs, having tree nurseries, sometimes a slightly bigger project like shade-grown coffee plantation or pineapples, or something like that,” Goodall explains. “And because it's not just a grant given to them, but it's a loan, when they pay it back — and they do — now it's theirs. They've done it by their own hard work. It started with 12 villages around Gombe. It's now in 104 throughout the whole of chimp range.”

Goodall’s youth program, Roots & Shoots, has also grown dramatically since she launched it in 1991. The program grew out of conversations she was having with young people.

“I was meeting young people who seemed to have lost hope,” Goodall says. “They told me they felt depressed or apathetic or angry because we've compromised their future and there's nothing they can do about it. Well, we have compromised their future. In fact, we've been stealing it. But I didn't think it was true [that] there was nothing they could do.”

She began the program with 12 high school students who visited her at her home in Dar es Salaam, the capital of Tanzania.

"Every single one of us makes some impact on the planet every single day, and we get to choose what sort of impact we make."

“We decided the main message would be: Every single one of us makes some impact on the planet every single day, and we get to choose what sort of impact we make,” Goodall explains. “And we decided that because in the rainforest you learn how everything is interconnected and every little species has a role to play — just as we all do — that every group would choose for themselves three projects: one to help people, one to help animals, one to help the environment. And because they get to choose it, they're passionate.”

The program is now active in more than 86 countries and has hundreds of thousands of groups, with members in kindergarten, at university and everything in between. Its success is grounded in the understanding that “much more important than our nationality, our language, our culture, our religion, the color of our skin, our food preferences — more important than all of that — is the fact that we're one human family,” Goodall says. “Our blood is the same if we hurt ourselves, our tears are the same, our laughter's the same and that is something which we need so desperately today.”

The COVID-19 pandemic has only highlighted the need for people to take collective action on everything from factory farming to wildlife trafficking, Goodall says.

“We brought this entire pandemic on ourselves...and it's entirely because of our disrespect for animals and the natural world.”

“[W]e brought this entire pandemic on ourselves,” she says. “The scientists studying these zoonotic diseases — the ones that jump from an animal to a person — have been telling us for a long time that this pandemic was coming and it won't be the last, and it's entirely because of our disrespect for animals and the natural world.”

“We cut down the forests, we're pushing animals into closer contact with people, animals are being trafficked, and many of them from different parts of Asia and even from Africa are ending up in the wildlife meat markets in Asia in horrible, unhygienic conditions. … So it's our fault. It's our disrespect,” she continues. “Here are we, the most intellectual creature that's ever walked the planet, so how come we're destroying our only home?”

Goodall believes we’ll come out of this pandemic, as we’ve come out of previous ones, like the Black Death, and then we will have to confront the “real existential crisis of our time,” which is climate change.

Goodall believes we’ll come out of this pandemic, as we’ve come out of previous ones, like the Black Death, and then we will have to confront the “real existential crisis of our time,” which is climate change.

“It was Mahatma Gandhi who said, ‘The planet can provide for human need, but not human greed,’” Goodall says. “We've become very greedy as we’ve become more and more materialistic and less and less having any spiritual connection with the natural world. … If we all make ethical choices every day, if we ask about the consequences of the choices we make — Where did it come from? Did it harm the environment? Was it cruel to animals? — it will make a big difference.”

Goodall also has confidence in the resilience of nature. There are no bare hills around Gombe anymore, she notes. “The trees are back. Leave the land, give it a chance, nature reclaims. Animals on the brink of extinction can be given another chance.”

And then there's the indomitable human spirit, Goodall adds — the people who won't give up, those who tackle what seems impossible. She is clearly one of them.

She keeps going, she says, traveling as much as 300 days out of the year, because she cares passionately about the environment, about animals, about children — and because she’s obstinate.

“Do you think I'm going to let the Donald Trumps and Bolsonaros and people like that knock me down and keep me down? No. I'll go on fighting till the day I die."

“Do you think I'm going to let the Donald Trumps and Bolsonaros and people like that knock me down and keep me down,” she asks. “No. I'll go on fighting till the day I die. Because I'm passionate, and because I believe we have a window of time. … [I]t’s only if we all do our bit and get together that we can start slowing down climate change [and] heal some of the harm that we've inflicted.”