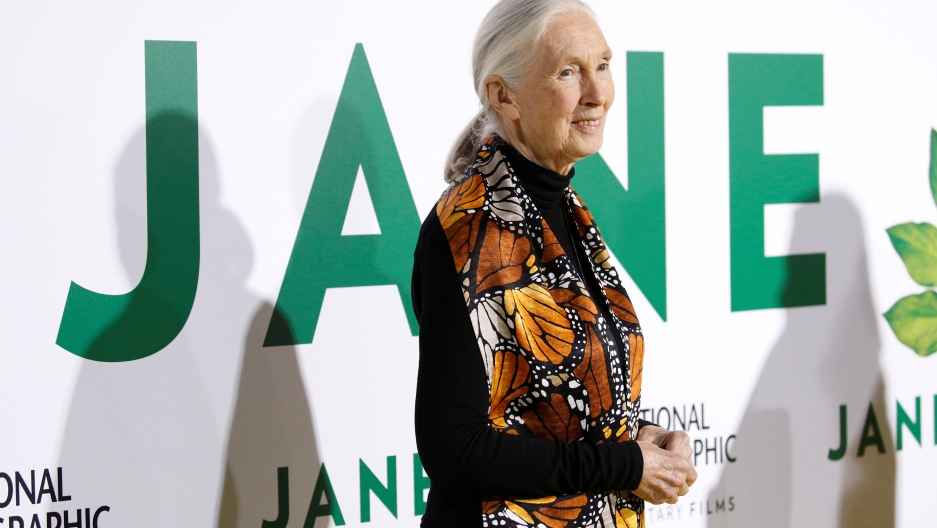 It’s been more than 50 years since Dr. Jane Goodall first traveled to Gombe, Tanzania, as an amateur scientist and began amassing observations that would change the way we understand chimpanzees and even humans. Now a new documentary, “JANE,” reconstructs Goodall’s time in the Gombe forest, drawing on a trove of recently discovered archival footage.

“Back then, it was a very naïve, innocent sort of world,” Goodall says. “The magic of being able to interact with creatures who'd been running away from you for almost a year was something real special, and that comes out very strongly in this film.”

Goodall spoke with Science Friday about at length about the film, her fieldwork, encouraging the next generation of conservationists and even why she believes in Bigfoot. Highlights from their conversation are below, and you can listen to the full interview using the audio player.

“It was absolutely extraordinary. I mean, it was when the one chimp who began to lose his fear first. ... I called him David Greybeard because he has a beautiful white beard — I'm not quite sure why David Greybeard, but anyway, that came to be his name. And he came into my camp and pinched some bananas. So then I asked the cook, Dominic, to put bananas out.

“I was still going into the hills every single day, into the forest. ... Eventually, [David Greybeard] began coming fairly regularly and so I stayed down, got to know him better. And the first time he actually approached and took a banana from my hand, it was like the stories you read about people approaching uncontacted human tribes. That's how it felt.”

“Over the years, I've learned there are good mothers and not good mothers; there’s very few bad mothers — just one or two we've known. And Flo is just the perfect example of the very best kind of mother. She was affectionate, protective but not overprotective, and above all, supportive. And of course, that's what I attribute so much of my own success to: The way Mom brought me up, my mother. She supported my dream of going to Africa when everybody else laughed at me. I was 10 years old at the time. So finding out that chimpanzee offspring who have had a supportive mother have tended to do better, be better mothers, rise higher in the hierarchy if they’re males — it just stresses the importance of the first couple of years of life and the kind of upbringing that you have.”

On her best teachers

“First of all, there was nobody who could have trained me because nobody had done it before. That was, you know, the luck — I was sort of out there first. And [my mentor] Lewis Leakey deliberately chose me because he said he wanted somebody whose mind was uncluttered by the — in his opinion —sometimes not good scientific thinking. And you know, I completely agree with him. So when I got to Cambridge to do a Ph.D. because he insisted, I was told I couldn't talk about chimpanzees having personalities, minds capable of thinking, and certainly not emotions — you know, I was guilty of anthropomorphism.

“But fortunately, though I was really intimidated by these clever, clever professors at Cambridge, I’d had this wonderful teacher when I was a child who taught me that in this respect, they were wrong — and that was my dog. You know, you can't share your life in a meaningful way with a dog, a cat, a bird or a cow, I don't care what, and not know of course we're not the only beings with personalities, minds and emotions.”

“When I began, it was a notebook and pen — or pencil in the wet season — and typing it up at night, so that they were very long days. And then we graduated to filling a lot of the stuff in on check sheets and tape recorders. But you know, the only thing really different today is that we no longer have the banana feeding, we no longer have any interaction with the chimpanzees. But otherwise, the study has really gone on very much the same.”

On inspiring the next generation of conservationists

“My greatest reason to hope — and this is what I share — is that the young people, once they know what the problems are and we empower them to take action, to become involved in something they care about, then they're filled with hope, because they know that what they're doing is making a difference. And then they know that through our Roots and Shoots network and other similar groups, young people all around the world care, just like they do.

“And you know, I believe we have a window of time to put things right, so that along with the human brain, our amazing inventiveness, along with how incredibly resilient nature is if we give her a chance, even places totally destroyed can once again support life, and animals on the brink of extinction can be given another chance.

“And then there's the indomitable human spirit. You know, people who recover from terrible illnesses, they cope with disabilities, they tackle projects, problems that seem insoluble and don't give up. And it's really lucky that we have this indomitable spirit.

“You know, I'm looking out of my window here in San Francisco and it's thick with smoke. So when I was coughing earlier, it's these terrible wildfires. And if young people give up from things like wildfires and floods and hurricanes and climate change — which actually is real, I've seen it for myself and I know that we are a great contributor to it. So it's desperately important now more than ever that young people don't lose hope, because if you don't have hope — well, why bother to do anything?”

On solving the mystery of whether Bigfoot exists

“We haven't and you know, it's so peculiar. I want to believe there is a creature, whether it's a yeti, whether it's Sasquatch, whether it's the Yowie in Australia or the Wildman in China. ... My best story, which I'll tell very quickly — I went to a place in Ecuador, flew over miles and miles of untouched rainforest, landed with a little community of about 30 people. And in the area, there were six, seven such little communities, and the only communication between them were these hunters who went from village to village with news, like the old minstrels.

“And so I asked a translator, next time you see one of these hunters, please ask them if they've seen a monkey without a tail. That's all I said. So this guy had no idea why I was asking, and about six months later, I received a reply that four of the hunters had — and they're all separate from each other — they'd all seen monkeys without tails, and they walked upright and they were about six foot tall. That's pretty amazing, isn't it?"

This article is based on an interview that aired on PRI’s Science Friday with Ira Flatow. “JANE” is now playing in select theaters.