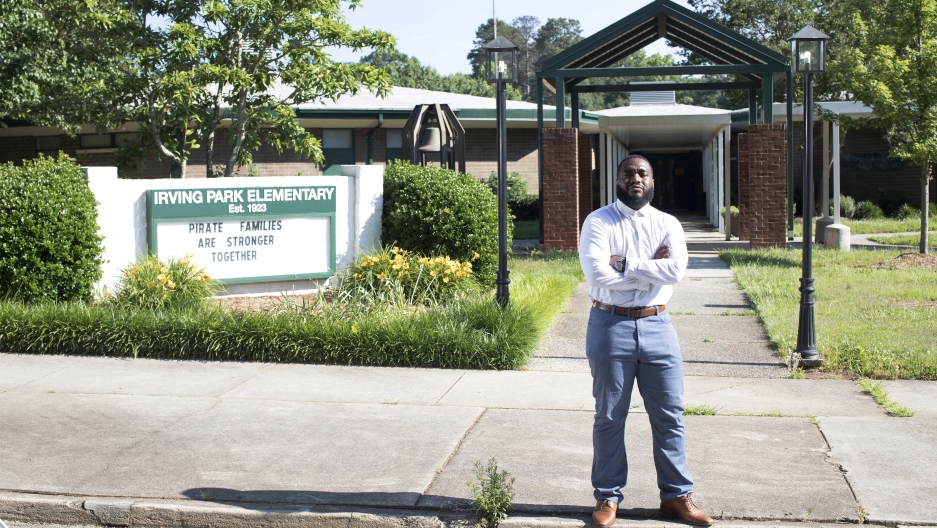 Brayan Guevara comes from a long line of educators: His mother is a college instructor, and his grandparents were teachers in Honduras.

Now, Guevara is on the same path. The 19-year-old is a sophomore at Guilford Technical Community College in Greensboro, North Carolina, and wants to become a teacher.

Before the pandemic and while school was still in session, Guevara spent his weekdays as a teacher’s assistant at Irving Park Elementary in Greensboro helping kids with their schoolwork and classroom behavior.

“At the time I was working with kindergarteners and first graders,” he said. “They're still in their fundamental stage where they need to do [work on] three-letter words or four-letter words. I will just help them do that and mostly get their own behavior in check.”

The lack of Latino educators in the US is one reason Guevara, who is Afro Latino, is pursuing his career path. He wants to change the way teachers interact with students, especially minorities. And he wants to serve as a model for his students — especially those who are Black, Latino and Afro Latino — so that they, too, see a future for themselves in education.

“How teachers treat Black kids, which I have experienced in my time — it’s just the stigma that they already have for these kids."

“How teachers treat Black kids, which I have experienced in my time — it’s just the stigma that they already have for these kids,” Guevara said.

The North Carolina Society of Hispanic Professionals is working to address the lack of Latino educators, especially those who are Afro Latino. The nonprofit promotes education among Hispanic youth in North Carolina.

But there needs to be more intention when it comes to recruiting Latino educators, said the group’s board chair, MariaRosa Rangel.

“If we truly believe in equity and if we really want to make a difference, we need more Latino teachers.”

Guevara shares his love of teaching with his mother, Nodia Mena, a Spanish language instructor at the University of North Carolina at Greensboro.

Mena received her teaching certificate while she was living in Honduras. She immigrated to the US in the 1990s, and worked in the corporate world in New York. After several years, Mena moved to North Carolina and earned her master’s in Spanish literature, then began teaching.

Like her son, teaching is her passion. And as an Afro Latina educator, she wants to expose her students to a world that is inclusive of all races.

“I realized that most of the Latino students are not aware of the presence of Afro descendants in Latin America, the lack of presence in the media,” she said. “It does not include Afro descendancy in it, and it's hurtful for me.”

Related: How a trip to Honduras shaped one young US Afro Latino voter's identity

The rise of Latinos in higher ed

While this increase is welcomed by organizations that promote Latino education, more work needs to be done to close the gap. Only 24% of Latino adults in the US have an associate’s degree or higher — compared to 44% of all US adults.

it’s a myth that Latinos don’t value education, said Deborah Santiago, co-founder and CEO of Excelencia in Education, a national nonprofit aimed at increasing Latino student success in higher education. And the US presidential election in November will give Latinos a chance to dismantle that myth.

“I think that Latinos represent the potential for how to redesign and restructure education that can serve all students of all backgrounds better by starting with this young group.”

“I think that Latinos represent the potential for how to redesign and restructure education that can serve all students of all backgrounds better by starting with this young group,” she said. "It has to be part of the voting opportunities because the elections impact investment in education. And disproportionately, that’s increasingly going to be authentic, and it has to be the way we’re investing in our future generations of populations.”

Where the candidates stand on the topic may be the deciding factor on who gets his vote, he said, especially when it comes to student loan debt.

“As a broke college student, we don't want to have a burden of the four years that we spent just to even get our degree,” he said.

“As soon as we are identified as being immigrants, then we are treated with that stigma, the negative stigma and then all of a sudden, whatever comes out of our mouth is really seen as deficient,” Mena said.

Teaching and inspiring students is what Guevara wants to continue doing and to follow in the footsteps of his grandparents and his mother.

“God puts you on this Earth for a reason,” he said. “I know I'm still young, but this is my purpose.”