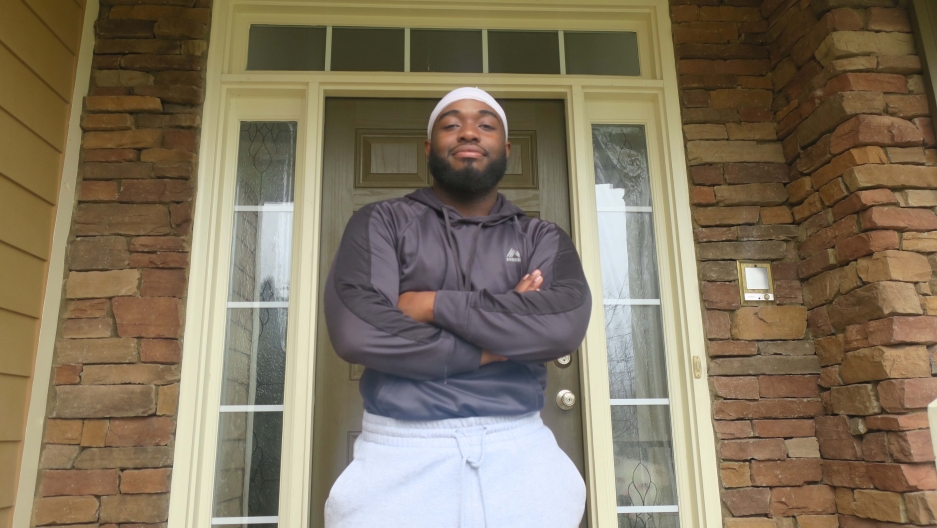 Brayan Guevara, a 19-year-old college sophomore, will vote for in his first presidential election this November.

Brayan Guevara said he still needs to do his research on the US presidential candidates before deciding which one will get his vote.

The 19-year-old sophomore at Guilford Technical Community College in Greensboro, North Carolina, will vote in a US presidential election for the first time in November. As an Afro Latino with roots in Honduras, Guevara straddles two groups whose votes candidates are fighting to capture: Latinos and blacks. And he wants to make sure his voice is heard at the ballot box.

Guevara’s mother, Nodia Mena, a Honduran immigrant, has volunteered with US political campaigns for years. She’s had a big influence on his interest in politics. Still, Guevara said he’s undecided about the 2020 election — though he spends at least an hour a day reading or watching videos about a candidate who has captured his attention: Vermont Sen. Bernie Sanders.

Every 30 seconds, a young Latino in the US turns 18 and becomes eligible to vote. Latinos are on track in 2020 to become the nation’s largest minority voter group — surpassing black voters for the first time. But sometimes, Guevara said, it feels as if candidates are vying for the Latino vote and black vote separately — and that’s where his experience as an Afro Latino differentiates the issues and candidates he’s watching.

Guevara’s mother, a Spanish lecturer at the University of North Carolina at Greensboro, had an influence on the issue most important to him: education. Guevara said he believes everyone should have access to education, and he’s felt that way for years.

It’s one of the reasons he’s interested in Sanders, whose platform includes a plan for tuition- and debt-free public colleges, universities and trade schools. Guevara is studying to become a teacher, following in the footsteps of his mother and grandmother.

“I’ve always been a geek for education,” he said. “There's no better feeling seeing somebody grow throughout the year. You get to see a year's growth in kids every year, which is a beautiful thing.”

He said he hopes to inspire his future students not just through the way he teaches, but also through his Afro Latino identity. He wants to show children that it’s okay to be different, which is what he felt growing up in Greensboro.

Guevara grew up in the Bronx neighborhood of New York with his siblings before the family moved to Greensboro.

“Back in the Bronx there were a lot of people like me, Afro Latinos. A lot of brown-skinned Hispanics. But when I moved down to Greensboro, I didn’t see literally anyone like me. It wasn’t until I got to college that I saw people of Afro Latino descent.”

“Back in the Bronx there were a lot of people like me, Afro Latinos. A lot of brown-skinned Hispanics,” he said. “But when I moved down to Greensboro, I didn’t see literally anyone like me. It wasn’t until I got to college that I saw people of Afro Latino descent.”

Guevara said his mother instilled in him and his siblings a pride in their background. Throughout Latin America, there is a negative stigma attached to being dark-skinned or Afro Latino. But Mena said she always celebrated and recognized her identity as an Afro Latina.

“My grandmother made it a point to introduce me to my cultural traditions,” said Mena, who grew up in Honduras and immigrated to the US as a young adult. “My grandma, my mom was heavily into it because there is this system in place used to make us feel that they weren't good enough for anything. This stigma, this very negative stigma, and it's unfortunate, but that's the way we grow up in our countries in Latin America.”

Guevara said his identity means everything to him. He realizes candidates want his vote both as a black man and as a Latino, but he’s still trying to figure out how being Afro Latino shapes his political views.

Guevara said he didn’t recognize his Afro Latino identity until later in his life.

“It wasn't until my junior year in high school when I realized I should be adding the ‘Afro’ part to my Latino,” he said. “When I was a kid, I was — you know, I'm ignorant. I really don't know that much. So, um, yeah, I’m Latino, I should be just like, you know, the other Hispanic kids in my class."

"It wasn't until later when I realized that there's a lot more that goes into Afro Latinos,” he said. Guevara said he has often struggled with having to ignore one side of his identity to fit in among groups of friends or relatives. For example, around African American people, he feels he can’t always embrace his Latino side. And around Latinos, he feels a need to ignore his race as a person of African descent.

Now Guevara and his mother celebrate their Afro Latino identity together. They went to Honduras for a month last summer and plan to return for two weeks in June.

Honduras is special to them not only because of their cultural roots, but it’s also special to Mena because that’s where she began her interest in politics. Her parents weren’t allowed to be involved in politics in Honduras because of their race, she said. So when she moved to the US, she learned all about the United States’ political system.

"We are carried around as like, a token, you know, for people to vote for whoever is going to be in power."

“They wanted to be involved but there wasn’t opportunities given to Afro Latinos," she said. "We are carried around as like, a token, you know, for people to vote for whoever is going to be in power."

A friend taught her everything she needed to know about US politics. Eventually, Mena said, she got involved in Democratic political campaigns.

“I started getting involved with Obama,” she said. “That's when I started going around canvassing and so on and so forth, not only because it was an African American, but also because I realized that we needed to as, as Afro descendants, we needed to get more involved in the decisions that were being made for us.”

When they come home after work and school, they turn on MSNBC or CNN and discuss what’s going on in US politics. Still, he holds his own ideas on today’s political landscape and presidential candidates.

“I have listened to Trump some of the things that he's saying is, is like, he's politically right, as in you have to respect it, but some things aren't logical,” he said. “So, right now I am leaning towards Bernie as the Democrat.”