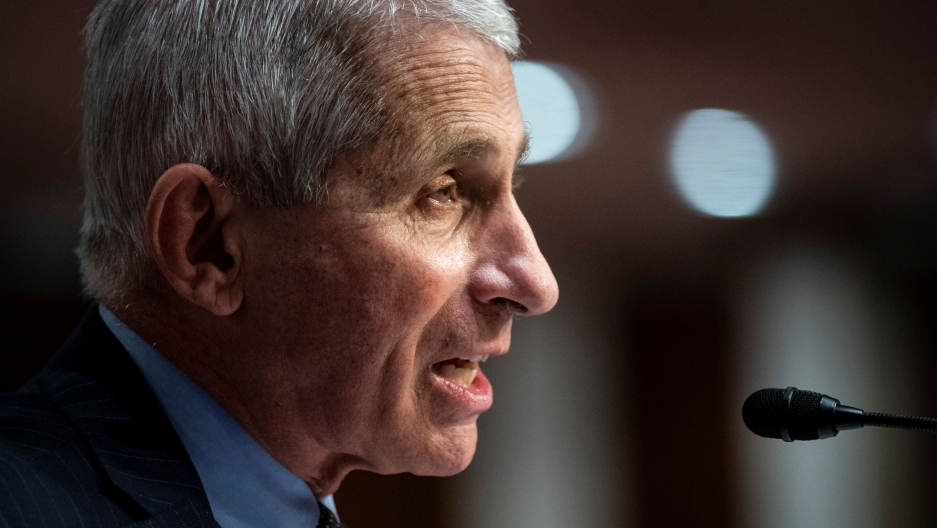 Dr. Anthony Fauci, director of the National Institute of Allergy and Infectious Diseases, speaks during a Senate Health, Education, Labor and Pensions Committee hearing on efforts to get back to work and school during the coronavirus disease (COVID-19) outbreak, in Washington, DC, June 30, 2020.

After days of record spikes in new COVID-19 cases and hospitals warning they could run out of beds, President Donald Trump's White House on Thursday sought to convey that all was well in the battle against the coronavirus and in efforts to get the US economy moving again.

Florida reported more than 10,000 new coronavirus cases on Thursday, the biggest one-day increase in the state since the pandemic started, according to a Reuters tally.

Related: This Latina teen says the pandemic will mark her generation — and shape her vote

The number of cases nationwide shot up by nearly 50,000 on Wednesday, the fourth record rise in infections in the last seven days, following moves in many states to allow businesses to lift strict shutdowns aimed at containing the pandemic.

The United States has reported more than 128,000 coronavirus-related deaths, nearly a quarter of the global total.

Dr. Anthony Fauci, director of the National Institute of Allergy and Infectious Diseases, has been one of the key health officials responding to the pandemic in the US. He said he sees COVID-19 as a formidable, global foe. He spoke to The World's Marco Werman.

Marco Werman: It’s especially worrying that in recent weeks we’ve seen the virus surge, even in countries that had seemed to have reined it in. I’m thinking of Germany, Singapore and China. They were all applauded for taming it, only to have to reimpose lockdowns. Is that inevitable worldwide?

Dr. Anthony Fauci: Even though there may be guidelines, wherever they may be — in Europe, in the UK, and other countries, even here in the United States, — in which you want to follow the guidelines to keep the virus under control, the kind of gradual, very prudent, careful step-by-step trying to reopen (because you can't lock down the planet indefinitely for so many obvious reasons) that there are situations where people (because of their feeling — they don't want to be cooped up for such a long period of time), when you do try to open up the situation or open up society to get more flexibility, then you see people overdo it, like the scenes that we've seen on TV and in the paper of when states and cities try to open. ... You have people go from one extreme to the other — from being locked down versus "let caution fly to the wind" and let people have massive gatherings and beach parties and bars open. Those are the kind of things that are a sure-fire bet to get the kind of resurgences that we're seeing, not only in the United States, but anywhere when they try to imprudently open.

Let's talk treatment for a moment. In recent weeks, there's been a lot of enthusiasm about potential effective treatments for COVID-19. Are we getting close to treatments that will make a real difference?

We do have some treatments that make a real difference with people with advanced disease. The study from the UK on dexamethasone in people on ventilators and those that require oxygen — that it significantly diminishes the mortality associated with advanced disease — I think is very important. The other thing is a drug remdesivir, which was tested in multiple countries, including in the United States, — in a large placebo-controlled trial — shows that that drug, which is predominantly an antiviral, that the use of Remdesivir in hospitalized patients with lung disease diminishes or decreases the time it takes to recover. So those are two promising advances.

We learned, Dr. Fauci, this week, that the US government has an agreement with Gilead Sciences. For the next three months, the bulk of Gilead's production of remdesivir will be available exclusively to Americans. When the US government does this sort of thing, essentially cornering the market on a treatment, how does that impact the pandemic itself? And just our global ability to take it on?

Yeah, I mean, obviously that's something that is a very difficult situation. I can't comment on that. I have nothing to do with that. But I mean, I've always been one who's been pushing and advocating for an attempt to get equitable distribution of scarce resources. But that's something beyond my control.

If and when a vaccine is developed, what can be done to make sure it is shared worldwide in an equitable way?

Well, I hope that there will be — and I feel cautiously optimistic that there will be — more than one safe and effective vaccine that is made by more than one country. I know the Chinese are well on their way to developing a vaccine, as are countries in Europe. We, in the United States, have been helping and partnering with a number of companies, companies that are USA based, as well as companies that are internationally based, to try and de-risk their procedures to make it more easy for them to make a vaccine and get into a clinical trial. Several of the companies have promised that they will be putting into effect the capability of making hundreds of millions of doses. And even after a period of time, even a billion doses, if they are successful — which I hope they are, because they're saying that they have that as a goal they think they can reach — then that would make it much easier to have a much more equitable distribution of vaccines, not only for rich countries but for those who can't afford it.

I mean, in other wealthy countries, citizens seem more on board when it comes to wearing masks and not getting together in big groups indoors, staying six feet apart, those measures. How do you understand why Americans are seemingly such outliers when it comes to smart behavior around the pandemic?

I know I can't explain it. We're a complex country. We have a lot of different opinions about things. What I think we need to try and make more clear is that we are all in this together, and even though we are a heterogeneous country, we should not forget that we're interconnected. If you look at it, a person getting infected, feeling that it doesn't matter if they wear a mask because to them it's not a big deal to get infected, are really part of the process of the dynamics of the outbreak. And they can't think of themselves in a vacuum. And when you get infected, even though it doesn't bother you, you may be helping to propagate a process that's going to have serious consequences for others. It becomes a societal responsibility more than worrying just about yourself.

Dr. Fauci, a little over a month ago, the writer and AIDS activist Larry Kramer died of pneumonia. He was 84, had a big life. You were part of it, appearing together many times in the media, clashing over whether the federal government was doing enough to fight AIDS. Ultimately, you were allies and friends. Larry Kramer stands out because he was someone who wasn't scared to slap back at anyone ignorant about HIV. And in the end, his vocal approach produced results. Did he leave you with any lessons that might serve as well in fighting this pandemic and the ignorance around it?

Well, yes, I mean, Larry and I became very, very close and dear friends over the years and I was terribly saddened by his passing, but he did a lot of good lessons. I mean, the idea about speaking up and getting the community to be part of the solution, as [compared] to part of the problem. And I think if Larry just heard what I told you over the past minute or so, he probably would be cheering from above, in that we do need to take a societal responsibility. He was very, very much — besides being iconoclastic and confrontative with thinking the government was not doing enough — he very often called upon his own people, as he called them, the gay community, to really take upon themselves what they need to do to protect themselves from getting infected, as well as for making sure that the right things get done by the government. So I think he would be echoing what I'm saying right now about societal responsibility that we have to each other. We're all in this together. This is not something that you could feel that you're in a vacuum no matter where you live, no matter who you are. Whatever country you're in, whether it's the United States or any other country throughout the world.

Do you think the federal government would be well served by some well-placed Larry Kramer outrage right now?

I'm not sure it's necessarily outrage, but it's really an attention to what's happening right now, this very, very difficult situation. I think you just need to look at the numbers and you'll see that it's not going in the right direction. We’ve got to do something about that. And that’s why we’re calling on all people to really realize that we are all part of a process, that we’ve got to chip in and make sure we do our part.