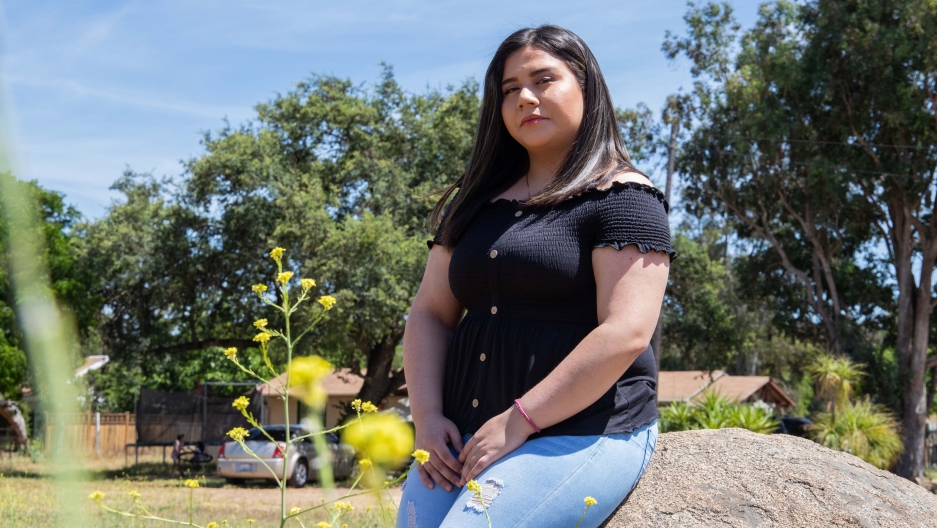 Marlene Herrera, 18, is a first-time voter in San Diego County.

About 20 friends and family members surround Marlene Herrera in her aunt’s yard in northern San Diego County. They’re mostly social distancing. The crowd sings in Spanish, urging her to not lose momentum.

Herrera wears a graduation cap and gown and swings a bat at two piñatas in the shapes of the numbers one and eight. She’s celebrating her 18th birthday and her high school graduation. Both events fell the week San Diego county began to relax its coronavirus restrictions on gatherings.

Finally, the piñatas break from their strings. The crowd cheers.

Like many teenagers, Herrera has worked through a lot of frustration over the past few months. First, the pandemic hit. Then, she had to complete her senior year from home. During that time, she’s been living in a crowded house with five cousins under the age of nine, along with her younger sister, mother, and aunt. It’s hard to find space for herself or to do her work.

In this new reality, Herrera said, she and many of her friends feel powerless. She’s been thinking a lot about mental health — and when she starts college this fall at San Francisco State University, she plans to major in psychology.

“A lot of us were like, ‘I can’t believe this is happening,’” she said of the pandemic. “A lot of us got to the point where we burst into tears when we were picking up our cap and gowns. Even my mom, she was crying. She told us, ‘This is not what I expected for you, what I planned for you.’”

Related: Coronavirus upended her family. But this Latina teen is determined to make her vote count.

The mental health impacts of the coronavirus pandemic will be felt for years — especially by young adults, according to experts. And the stress they experience will impact their political behavior in the US presidential election this November, and for elections to come.

“We’re going to be paying for this for a long time, because of the betrayals or the feelings of being left behind. Those are going to last for people.”

“We’re going to be paying for this for a long time, because of the betrayals or the feelings of being left behind,” said Tina Casola, a San Diego-based family therapist who specializes in trauma and the long-term impacts of stress. “Those are going to last for people.”

For Herrera, the pandemic means no graduation ceremony. No prom. After her preferred presidential candidate, Vermont Sen. Bernie Sanders, dropped out of the race in April, she was undecided on who she would vote for in November. But with the protests over the killing of George Floyd in Minneapolis and other acts of police violence against Black men and women, Herrera says she’s made up her mind.

“I think I’m leaning towards Biden,” she said in a whisper. “Not that I’m entirely happy with him either.”

To her, President Donald Trump crossed a line when he sent in the National Guard during the Black Lives Matter protests.

“You’re just adding to the fire. You’re fighting fire with fire. How is that OK?” she said. “I want a change.”

Related: Can Biden turn out Latinos to vote? Advocacy groups aren't sure.

A pile-on of stress — and bills

Meanwhile, the stress piles on. Due to the pandemic, Herrera’s mother was briefly laid off this spring from her job at a law office. With many family members now living under one roof, the stimulus check her mother received from the government was a huge help.

“It’s a big family here. We needed that,” Herrera said. “Especially the kids, because they are small. They have a very big appetite and a very fast metabolism.”

Her mother was eventually rehired after her office got a government loan. Still, Herrera wishes federal and local governments had done more during the stay-at-home order to prepare businesses to reopen safely.

“For us, you can’t afford to not work,” she said. “We still gotta pay rent. That’s not going to stop. You can’t stop paying for food. You can’t just stay home. I don’t want to come home and be the one that infects my family for some reason.”

While young people in Herrera’s age group — known as Generation Z — are far more supportive of one another than previous generations, Casola said, they’re still looking to older people as models on how to get through the crisis brought on by the pandemic.

“We have to figure out ways of getting into our communities and giving them support during this time. Even though none of us have the answer. We don’t have a blueprint for this,” Casola said. “But they need to benefit from some of the seasoning that we’ve had, in order to pull these things together and be able take care of themselves.”

The pandemic and its mental health toll are not the only things on Herrera’s mind.

She grew up always worried about her family’s finances. She also grew up in San Diego, a US-Mexico border region. And as a Latina from a low-income family, Herrera feels tremendous pressure from the US government. Though Herrera’s family members are all US citizens, the heavy presence of Border Patrol and Immigration and Customs Enforcement, along with uncertainty surrounding friends without permanent immigration statuses, have influenced her political perspective.

“I just don’t want a government that is working against me. Like, I don’t want to feel like I’m fighting the government. They should be there for me.”

“Not even from a Mexican point of view, just talking as a person of color point of view. There’s been so much oppression we’ve had. And we’re seeing it right now,” she said, referring to the government’s response to protests against police brutality. “I just don’t want a government that is working against me. Like, I don’t want to feel like I’m fighting the government. They should be there for me.”

According to Casola, life as a Latina in a border town can both narrow one’s worldview, by limiting access to outside perspectives, and make it seem like this type of pressure is typical elsewhere in the country.

“Living in San Diego, it’s definitely different than if we go to other places and we have conversations about that,” she said. “Perspectives are so important.”

The government’s response — or lack of response — to the pandemic has Herrera thinking about how politics directly impact her life.

“As much as people want to say Trump is good, and that he did all these changes and I’m grateful for any changes he’s made, I think it’s time for someone new,” she said. “You can’t be living in the time of like, oh my God, what is he going to do now. What’s he tweeting? We’ve had so many scares with him.”

Looking ahead to a long summer of helping take care of her cousins and trying to safely see friends when she can, Herrera thought about what she would change about this year if she had a magic wand.

“We didn’t get a graduation, we never got a normal graduation ceremony. No one got to get their yearbooks signed either. The last hurrah — you’re not going to get that.”

“Just my senior year,” she said. “We didn’t get a graduation, we never got a normal graduation ceremony. No one got to get their yearbooks signed either. The last hurrah — you’re not going to get that.”

Herrera thinks missing prom, not having a chance to say goodbye to her classmates, and facing deeply uncertain job prospects will forever mark her generation.

Still, she was happy with what she could piece back together over the last few weeks. After her joint birthday-graduation party, Herrera said the best part of the day was finally being with her family and friends again in one place.

“It’s been over two months. I was like, ‘I get to see you again, I get to hug you. Wait, are you OK with hugging?’” she said, laughing.