This story first aired on KERA Texas. Read and listen to the original here.

Despite the coronavirus pandemic, Hotel Flamingo in Ciudad Juárez has been filling up with guests.

When they arrive, they have to go through a thorough disinfection process. First, they step inside a tray filled with diluted bleach to clean off the soles of their shoes. Then it's on to a handwashing station, where they're instructed to scrub with a generous amount of soap and follow up with a big squirt of hand sanitizer.

Finally, they receive a fresh face mask, and the hotel coordinator sprays their shoes with an alcohol mixture.

These guests aren't tourists on vacation. They're people who tried to cross into the US but, for a variety of reasons, have been sent back to this border city and need a safe place to stay. 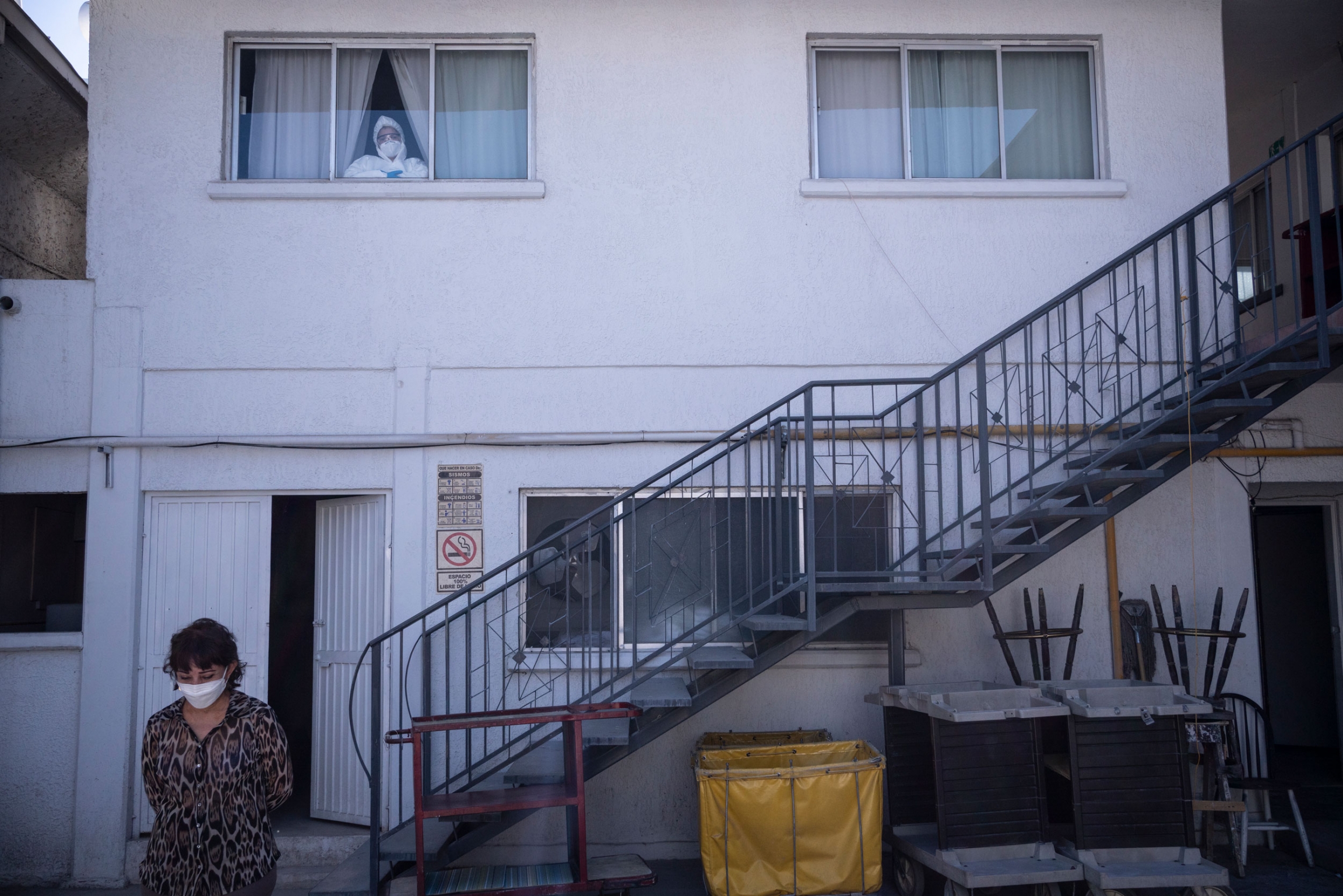 Doctor Dayaites Rios is pictured through the window in the attending physician's room while Doctor Leticia Chavarria stands below on May 30, 2020 at Hotel Filtro in Ciudad Juárez in the state of Chihuahua, Mexico.

'We're taking migrants off the street'

Migrant shelters, which are trying to control the spread of COVID-19, can't immediately take them in. So Hotel Flamingo has been temporarily converted into a "filter hotel" — a space where they can quarantine for 14 days before transferring to a longer-term shelter.

"We're taking migrants off the street and away from the risk of potential infection," said Leticia Chavarria, the hotel's medical coordinator. "We have them here for two weeks, and if during that time they don't present any symptoms, then another shelter can receive them."

Once guests have washed up, hotel coordinator Rosa Mani guides them to a waiting room with well-spaced out chairs and explains how things work. Every guest will go through a preliminary health screening, then receive a private room.

"We're taking migrants off the street and away from the risk of potential infection. We have them here for two weeks, and if during that time they don't present any symptoms, then another shelter can receive them."

"One of the first questions is if someone feels ill, if someone has a headache, a fever, or any symptom related to COVID," said Mani, who is with the World Organization for Peace. "If someone says yes, then immediately they're the first person we care for."

There's an isolation wing for people with COVID symptoms or who have come into contact with someone who's infected, and another wing for everyone else.

Protocols are strict. Once a doctor goes up to the isolation area, she can't come down until her shift is over. Anything she needs gets sent up in a bucket on the end of a rope, which Chavarria jokingly refers to as an elevator. 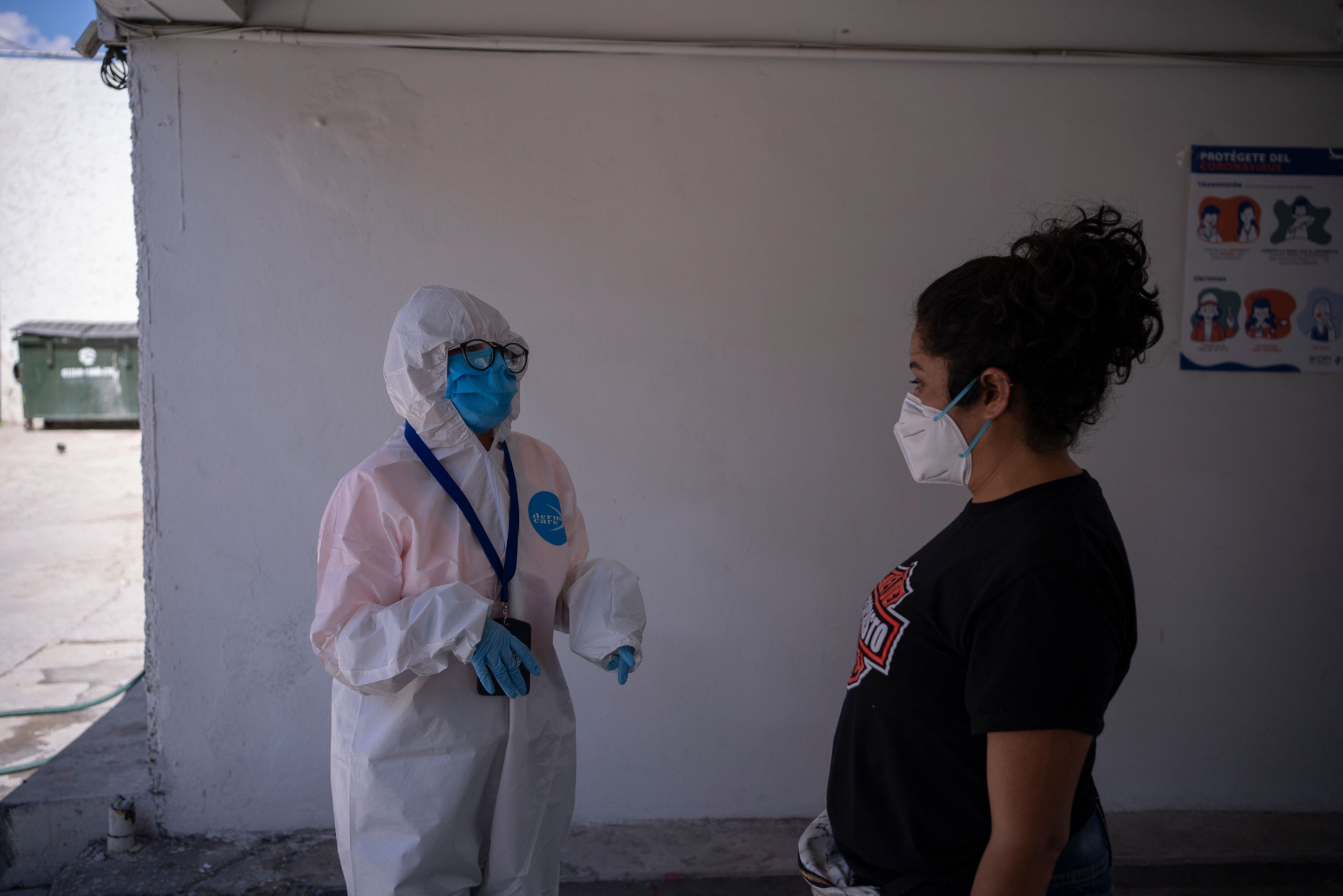 Rosa Mani, coordinator of Hotel Filtro, speaks to Portugese interpreter Flor Cedrella who was donning personal protective equipment and had just spoken to a Brazilian migrant in quarantine on May 30, 2020 at Hotel Filtro in Ciudad Juárez.

Many groups came together to rent out the hotel, stock up on cleaning and medical supplies and transform it into a quarantine center, including the International Organization for Migration, the World Organization for Peace, Seguimos Adelante and several government entities.

It can accommodate up to 108 people and is currently about three-quarters full. Recently, several medically vulnerable migrants and their families were transferred there from the government-run Leona Vicario shelter, where there has been a cluster of COVID-19 cases. Seven of them have since tested positive for the virus. According to Mani, they are currently in isolation and are not experiencing health complications.

Some hotel guests have been forced to wait in Mexico as their asylum cases play out in US immigration court, as part of the Trump administration's Migrant Protection Protocols (MPP). They've been living in Juárez for months or longer — renting out rooms or apartments — and suddenly found themselves in need of new housing during the pandemic, unable to afford rent now that work has dried up. Some have also lost financial support from relatives in the US, who are also hurting due to the coronavirus and can no longer send money.

Others have been rapidly expelled from the border, under a public health directive issued as concern about COVID-19 grew. 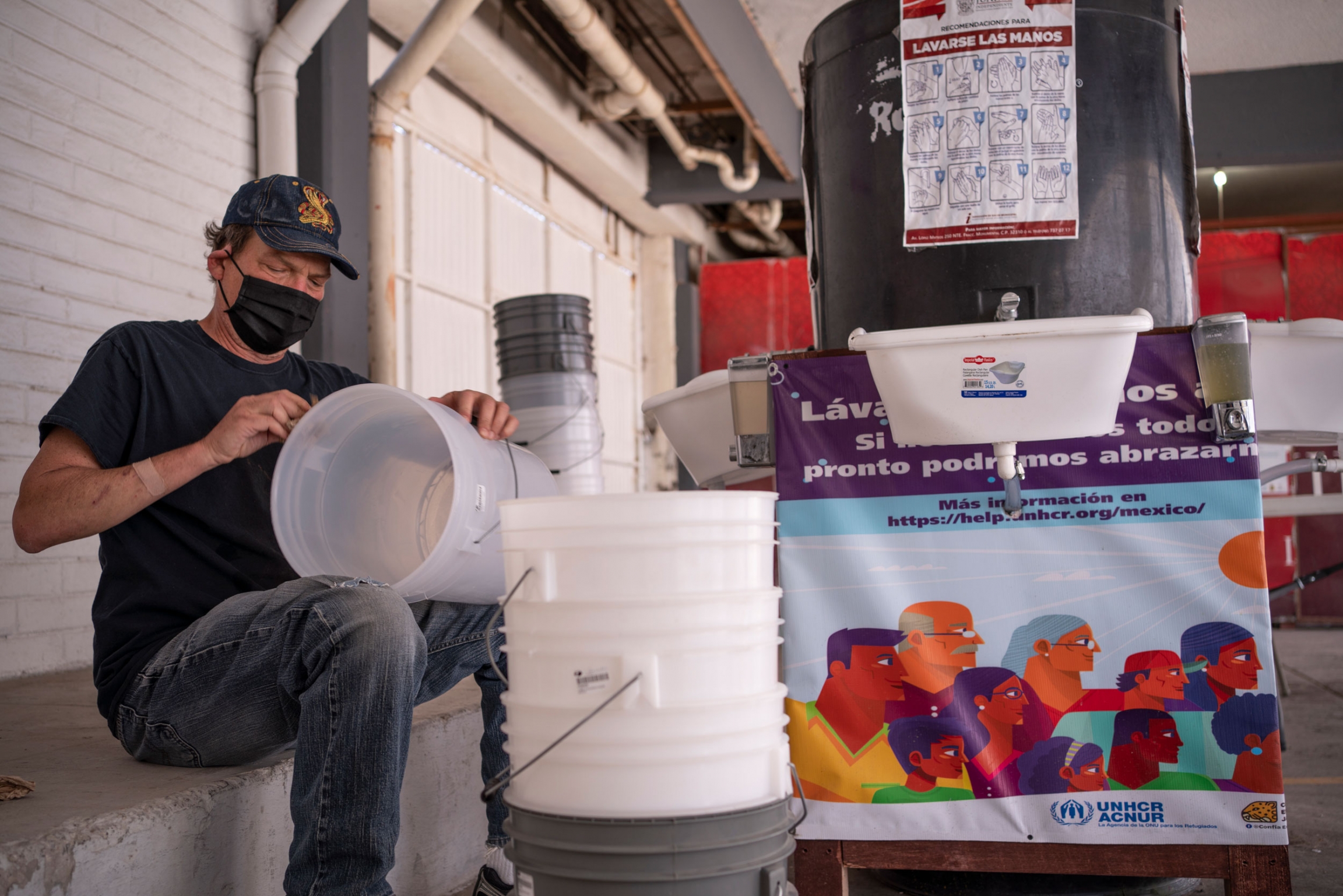 Michael Margolis, an American volunteer with NGO Seguimos Adelante disinfects buckets used by migrants for washing clothes on May 30, 2020 at Hotel Filtro in Ciudad Juárez. Hotel Filtro was set up by non profits as a place for migrants, many of which have been rapidly expelled from the US due to the pandemic, to quarantine at before being placed in a shelter.

That includes a Honduran mother who arrived at the hotel with her two children: an 11-year-old daughter and 4-year-old son. She asked that her name not be used, out of fear for her family's safety.

On a sunny afternoon in late May, she stood outside her room, taking in some fresh air while her son played behind her, stacking blocks into small towers.

Through a face mask, she recalled a journey that started last winter when, she said, a local gang tried to extort her.

"I sold candy," she said. "What I earned was only enough to cover my family's expenses."

So she fled. She could not have predicted that a global pandemic would dramatically alter her plans. But by the time she reached the US-Mexico border, coronavirus had reshaped daily life and public policy in both countries.

In late March, the Centers for Disease Control and Prevention (CDC) issued an emergency public health order that the Trump administration has used to expel unauthorized migrants at the border in a matter of hours, including asylum seekers. Officials take down basic identifying information in the field and then almost immediately send people back into Mexico or their home countries. 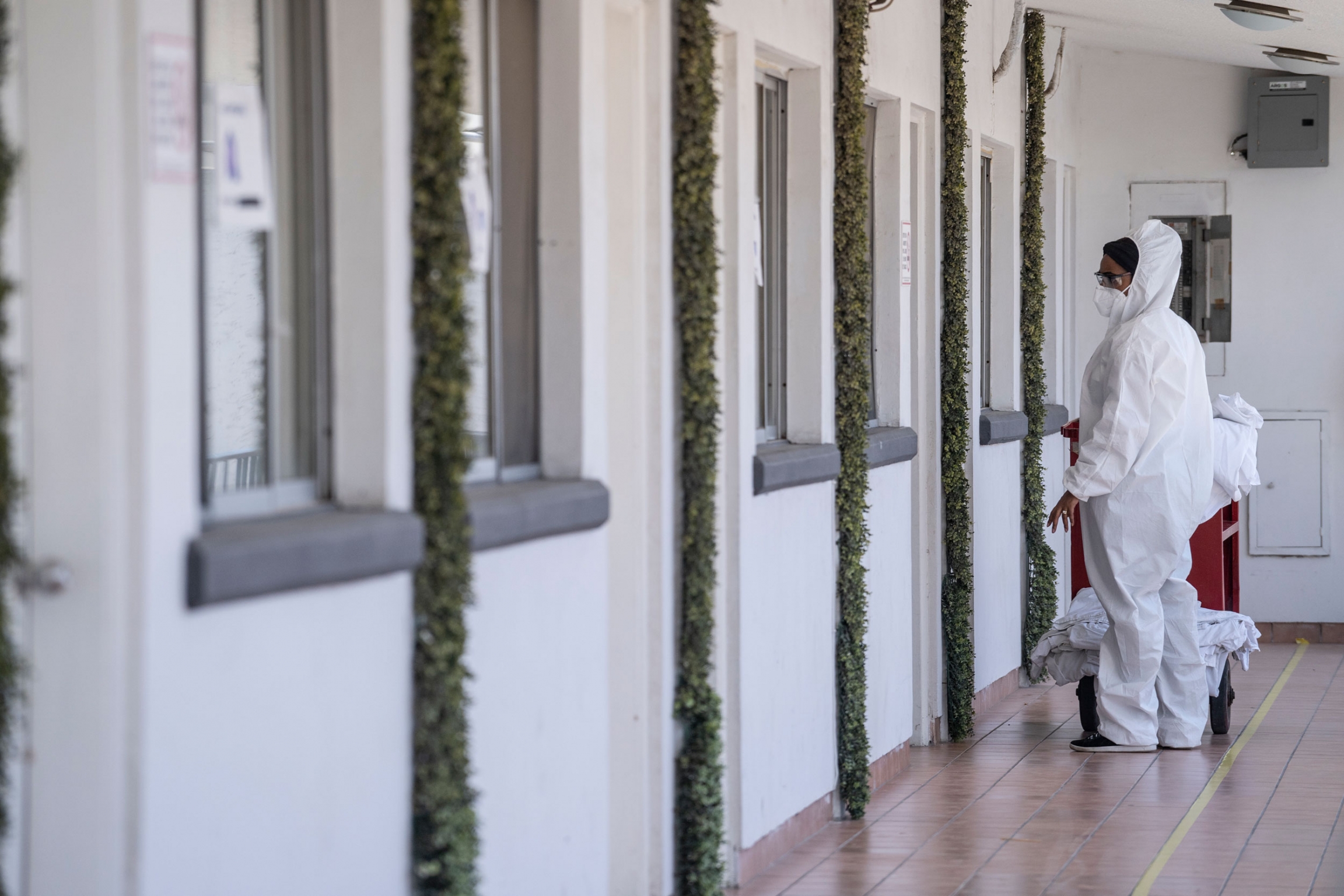 A Cuban volunteer doctor tends to migrants under observation on the second floor of Hotel Filtro in Ciudad Juárez on May 30, 2020.

Administration officials say this order helps prevent the spread of COVID-19 in the US, though dozens of public health experts have pushed back against the statement, arguing in a May letter to the CDC and Department of Health and Human Services that "there is no public health rationale for denying admission to individuals based on legal status."

After crossing the border, the Honduran mother claimed authorities detained her so roughly she was left with bruises and ripped clothes.

"They grabbed me worse than you would an animal," she said.

Related: US and Mexico are blocking kids from asking for asylum because of coronavirus

She said they took her photograph and fingerprints, then dropped her at an international bridge without any explanation.

"They didn't tell me anything," she said. "They just did that, without giving me any reason. It was really ugly."

She wasn't sure where to go. As a diabetic, she knew she was at an elevated risk for complications from the coronavirus and worried about what might happen to her children. But the Mexican governmental agency Grupo Beta brought her to the filter hotel.

She's grateful to them.

A place to wait and hope

It's difficult to think past the next two weeks. Going back to Honduras isn't an option, the woman said. But for 14 days, her family has a safe place to stay.

A few small touches make the space feel more homey. Her children painted flower pots during an outdoor art class, led from a distance by a volunteer teacher. She's placed them on the windowsill.

"I'm not lacking for anything here," she said. "They're giving me medical care, food, a place to sleep." 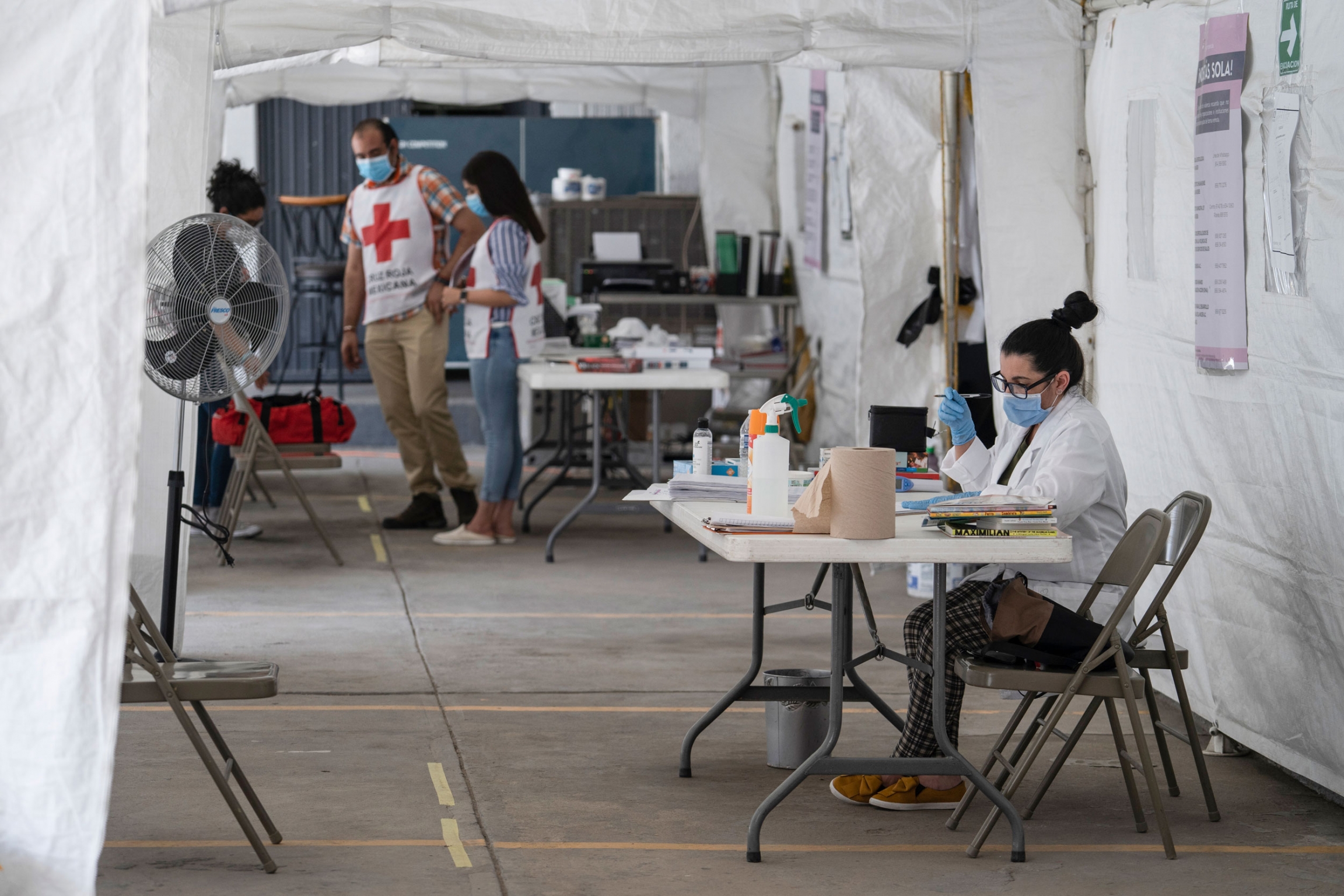 Doctor Yuneisy Gonzales, 37, from Cuba, is pictured at work on May 30, 2020 at Hotel Filtro in Ciudad Juárez. She volunteers as a doctor at Hotel Filtro, which was set up by nonprofits as a place of quarantine for migrants that have been rapidly expelled from the US due to the coronavirus pandemic.

"We go room to room," said Yuneisy Gonzales, one of six doctors who work at the hotel. They're volunteers, though they receive a small, mostly symbolic stipend. "We can't enter the rooms because we try to maintain all the safety measures. We check temperature, oxygen saturation levels, heart rate. We do a short physical exam."

Gonzales identifies with the guests here, because she is a migrant as well. She left Cuba last year, was placed in MPP, and has been living in Juárez while she pursues her asylum case. Before the filter hotel opened, she worked at a fast food restaurant — a far cry from her previous life as a general practitioner.

"It had been more than a year since I'd practiced medicine. You miss your profession. Because medicine is a profession that you study but also that you feel, and you like helping people."

"It had been more than a year since I'd practiced medicine," she said. "You miss your profession. Because medicine is a profession that you study but also that you feel, and you like helping people."

When Gonzales heard the hotel was seeking doctors, she was eager to sign up. It may not seem like much, she said, but monitoring people for 14 days means when they go back into the community, they won't be spreading coronavirus.

"For me, it's a huge honor to get up every day at six in the morning, get ready, come here, and put on my white coat," she said. "There's no comparison."

Gonzales' next asylum hearing is scheduled for July, though it's not clear if immigration court will be open by then.

"Sometimes you lose hope because it's been very hard," she said. "But I haven't considered giving up my case."

For now, this hotel has given her a sense of purpose — and so many others a place to shelter — while they wait.