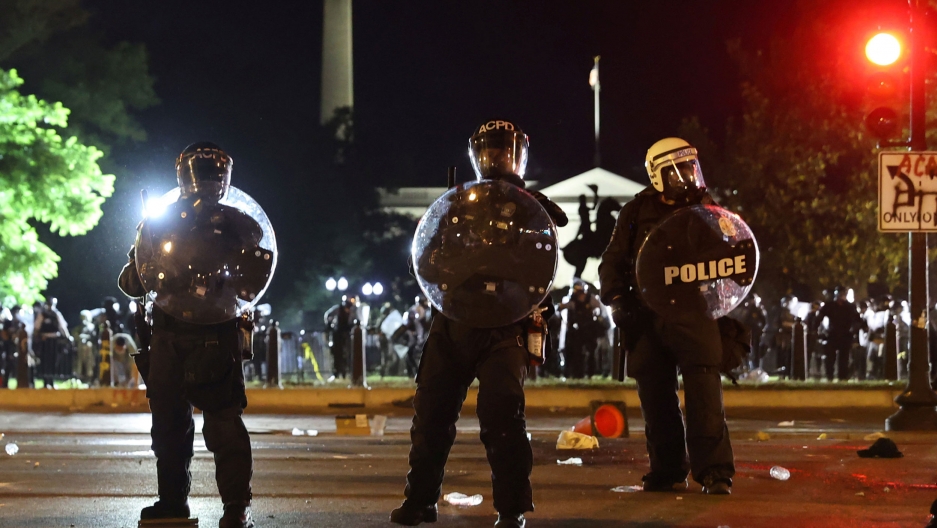 Police move protesters back in the midst of demonstrations near the White House against the death of a black man in Minneapolis, Minnesota, named George Floyd, May 31, 2020.

The widespread protests across the United States following the death of George Floyd, a 46-year old black man, while in police custody last week, are being featured prominitely in Chinese state media and social media.

While the unrest in US cities has been widely reported by international media, China's interest comes at a time when relations between the two are particularly strained.

China's state-run CCTV aired parts of an interview that Floyd's brother, Philonise Floyd, gave to US news channel MSNBC in its broadcast on Monday, where he said US President Donald Trump did not give him the opportunity to speak during a phone call and where he cried at the mention of his brother.

CCTV also featured reports from one of its personnel running with protesters in Minnesota, as well as short videos shot by Americans depicting police violence against protesters.

On China's social media platform Weibo, at least five news items on the protests were among the top 20 trending topics by midday, led by reports Trump had been temporarily taken to a bunker as protesters surrounded the White House.

On Twitter, the protests also featured widely among the top 20 trending items, with the hashtag #BunkerBoy at a prominent second place.

For some analysts, the Chinese media coverage of the protests echoed their reporting on the coronavirus situation in the United States.

"The number one thing they want to show is that the Communist Party is doing a better job in terms of fighting the coronavirus and managing society," said Alfred Wu, associate professor at the Lee Kuan Yew School of Public Policy at the National University of Singapore.

"That's the main message: the US is not doing good."

Some Chinese media have made comparisons between the US protests and those in Hong Kong, the latest flashpoint in US-China tensions. Trump has begun the process of eliminating special US treatment for Hong Kong to punish Beijing's decision to impose new national security laws on the territory.

The state-run China Daily posted a political cartoon showing a coronavirus patient saying "I can't breathe" — the dying words of Floyd — as a figure resembling Trump walks away after cutting the line to an oxygen tank labeled "WHO."

That was a reference to his decision to withdraw the United States from the World Health Organization on Friday.