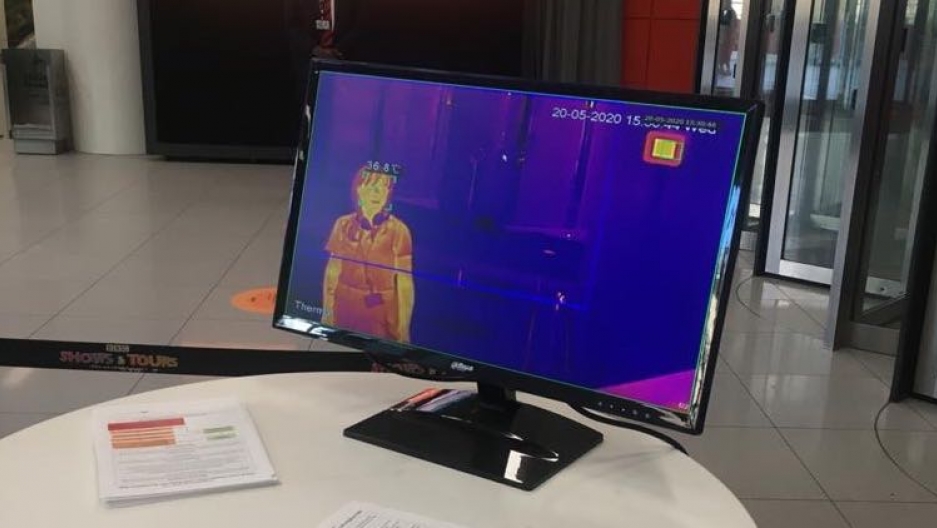 The World's Orla Barry can be seen stepping through a thermal scanner at the BBC.

Every day, as staffers walk into the BBC’s main headquarters in central London, they’re faced with a choice: to have their temperatures checked or not.

The broadcaster introduced a thermal imaging scanner in its reception a month ago to assuage employees’ fears about coming back to work — but it’s hard to know if it’s succeeding.

Most of the workers who opted to walk through the scanner say they thought it was helpful, but the BBC’s director of safety, security and resilience, Simon Adair, says in the first week of trialing the cameras, the majority of staff chose to avoid them.

Some just wanted to get straight to work, but others were skeptical and didn’t believe the science behind it, he says. 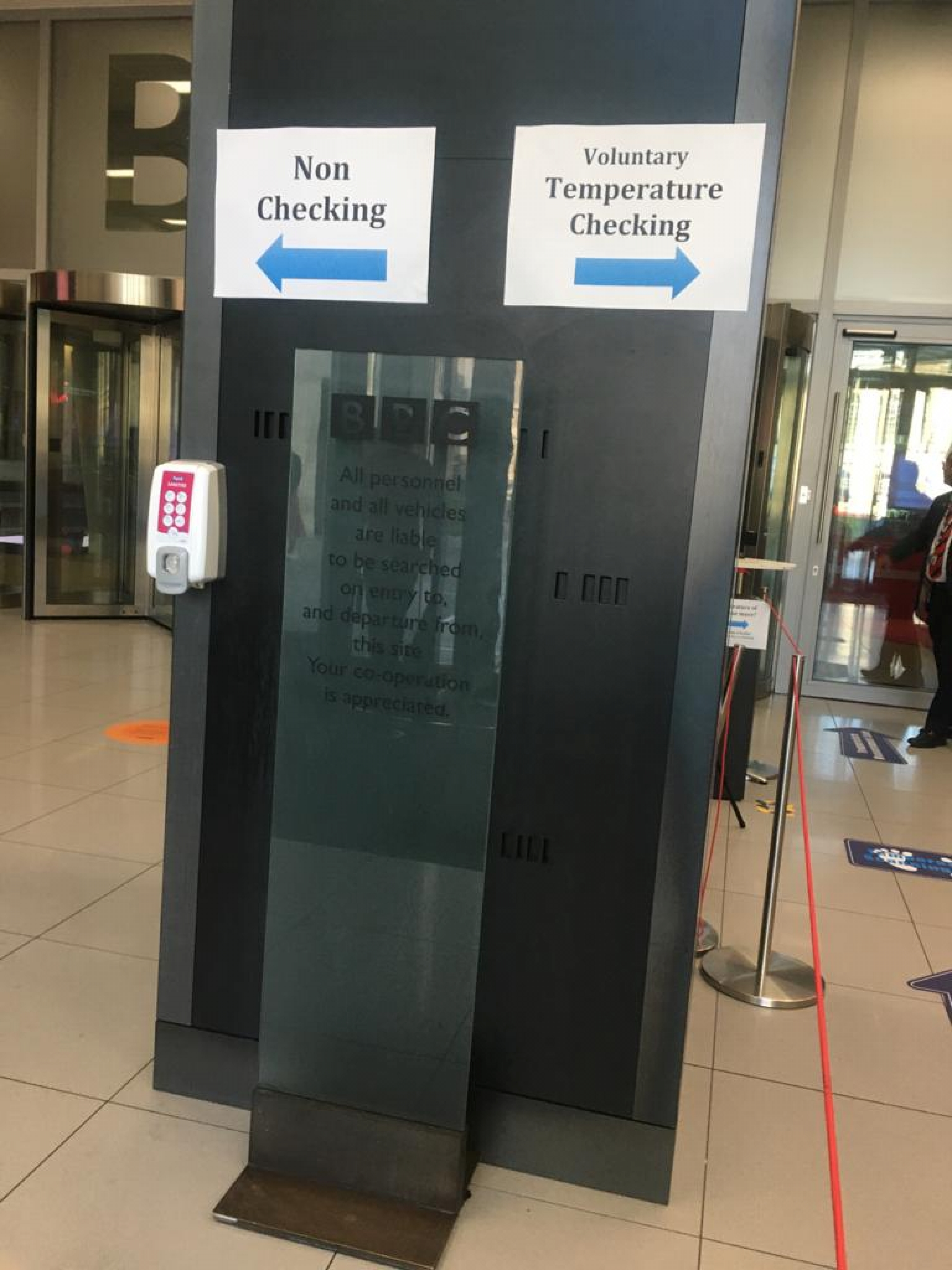 Signs in the BBC lobby in London guiding staff and visitors to voluntary temperature checks.

But the BBC plans to make it mandatory for all staff and visitors shortly, and it’s not alone. As the world continues to try to find ways to reopen and cope with the coronavirus in the aftermath of lockdowns, visitors and workers, from St. Peter’s Basilica in Rome to Tyson Foods in Iowa, will soon have to go through thermal imaging cameras to enter public buildings and workplaces.

The scanners work by detecting your skin temperature and indicating on a computer screen if the result is deemed too high. An elevated temperature, though, doesn’t mean you have the coronavirus or indeed that you’re sick. Temperature spikes happen after exercise, sitting in the sun, or if you’re menopausal and having a hot flash.

The hope is that the infrared scanners will detect a high temperature that may indicate a fever, a symptom of the coronavirus, and so help slow its spread. But workers’ rights groups and civil liberties organizations are worried about other implications of thermal scanning for people heading into work.

One of those raising concerns is Lewis Maltby, director of the National Workrights Institute in New Jersey. He says he has no objection to infrared cameras being used but asks what happens after an employee is stopped. He worries that sending someone home might mean the loss of pay and a long period out of work as they wait to be tested for the coronavirus.

“In the US, we don't have any testing capacity to speak of. Now, what happens when an employee shows up with a fever; the employer assumes that they're COVID-19 positive and sends them home, possibly without pay. And who knows when they'll get back to work?”

“In the US, we don't have any testing capacity to speak of. Now, what happens when an employee shows up with a fever; the employer assumes that they're COVID-19 positive and sends them home, possibly without pay. And who knows when they'll get back to work?”

FLIR Systems is one of the largest producers of thermal imaging cameras worldwide. FLIR's vice president of marketing and strategy, Ezra Merrill, says when used correctly, the scanners won’t register a high temperature if you’ve just jogged into the office or had a workout. But the cameras must be accurately positioned, he says.

“You want to look at that point near the eye, near the tear duct, to get a reading. We have not seen an impact from people exercising that would stop them coming through our screening system.”

Merrill says that demand for their thermal imaging cameras has soared in the last two months with requests coming from across a broad swath of industries including airports, football stadiums, hospitals and retail outlets. But Merrill reminds companies repeatedly that their cameras are not “fever detectors.”

Related: How do contact-tracing apps around the world compare?

His advice is that anyone who registers as having a high temperature on the scanner should then be tested again with a simple thermometer. 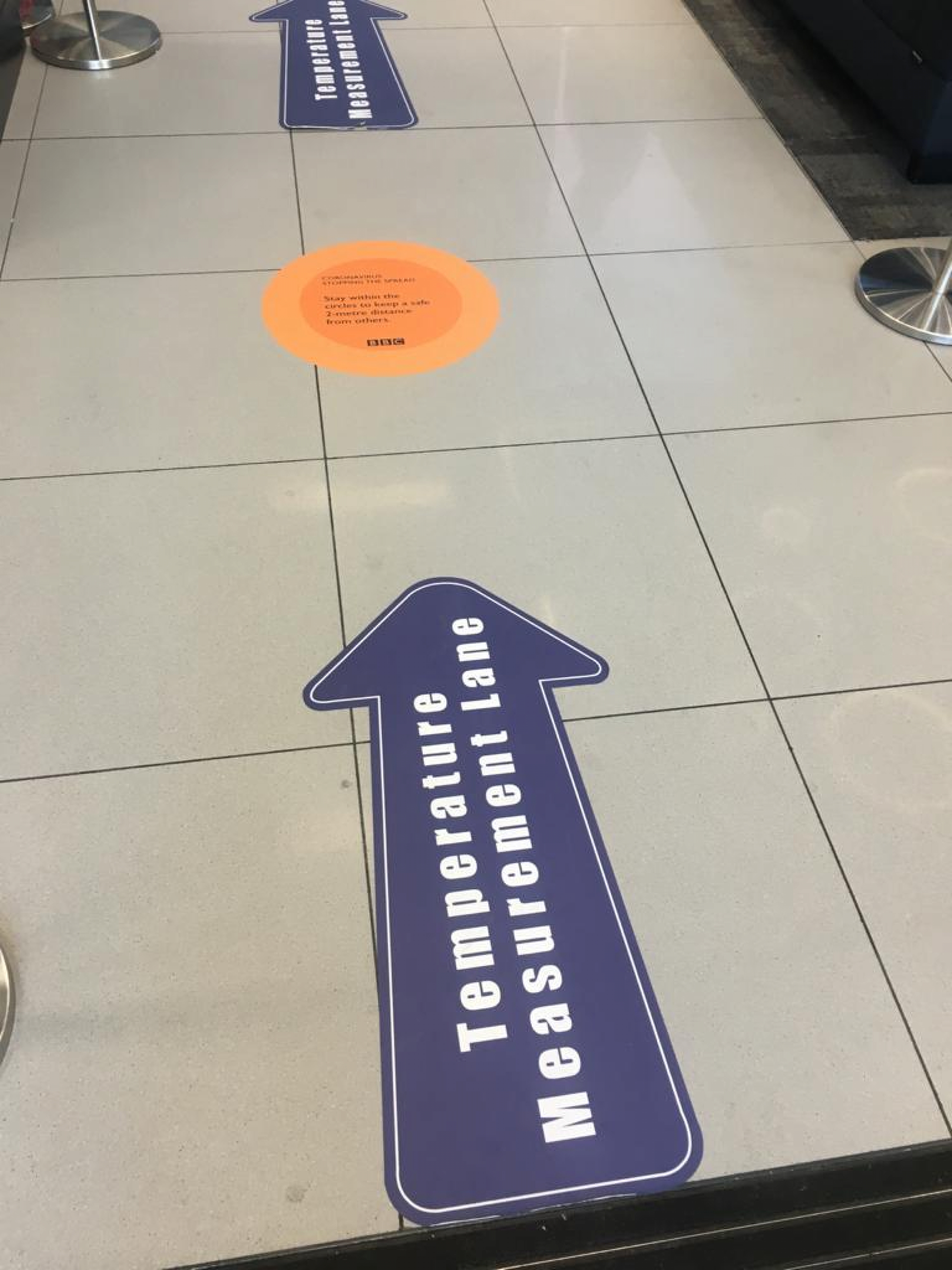 Signs on the floor at the BBC direct people to the thermal scanners.

Jay Stanley, a senior policy analyst with the ACLU, says he is concerned the scanners may lead people to think that they don’t have to adopt other safety measures.

“I think there's an element here of what's been called ‘security theater.’ Making a big show of doing something, anything to convince people that they're safe. But there are some downsides to that because it can create a false sense of security in people.”

“I think there's an element here of what's been called ‘security theater.’ Making a big show of doing something, anything to convince people that they're safe. But there are some downsides to that because it can create a false sense of security in people.”

Stanley, who has just published a report on temperature screening and civil liberties during a pandemic, says he’s not convinced about the scanners’ accuracy. He cites research by IPVM, an independent site that tests surveillance cameras, which found several companies exaggerated the accuracy of their products. Temperature readings can be affected by a range of issues, he says.

Related: Can the pandemic encourage airlines to be greener?

Concerns from the ACLU and workers’ rights groups are unlikely to curb the demand for temperature testing.

Maltby, of the National Workrights Institute, says employees are unlikely to revolt given the current economic climate. But he says the solution for businesses may not lie in the hands of employers, anyway.

“Unfortunately, there's not that much employers can do. The real answer is more testing capacity, and employers aren't in control of that.”

Stanley agrees. He says most of the measures that businesses need to adopt are already well-known and relatively low tech.

"It's testing. It's social distancing. It's contact tracing. And that is where the resources need to be devoted."

"It's testing. It's social distancing. It's contact tracing. And that is where the resources need to be devoted."

The question of privacy is also an issue for the civil liberties union. Having your temperature taken doesn’t appear like much of a breach, but Stanley worries where it might lead. If companies can retain the information, they could have a better insight into your physical health over time.

Merrill says FLIR Systems’ scanners do not retain any personal information. But Stanley worries that if the public accepts machines that measure temperature, this may lead to the introduction of other devices that monitor our health more intensively.

If the public accepts temperature checks now in the belief that they’re combating a pandemic, it could set a precedent in the future for more intrusive readings that can be done remotely, without our knowledge, let alone our permission, he says.