Speaking a dream or a goal into existence has little evidence proving its effectiveness. But for Nick Green, creator of the Social Distancing Festival, the practice has worked.

“My dream is to hear the story of two artists that have met through my site and collaborate on some really profound piece of art,” Green told The World in March. His site aggregates content from artists whose performances have been canceled due to the coronavirus pandemic. “And they live across the world and never would have met, otherwise."

“It's quite poetic that we're speaking again, given the last words in our last interview of what my big dream was — to have this become more of a collaborative project,” Green told The World more recently. “And now, there have been some new projects happening that are really, really exciting. It’s called Long Distance Art.”

Related: Artists flock to the only ‘festival’ still on during COVID-19

Long Distance Art, which launched this week, is an international, multidisciplinary collaborative art series that emerged from The Social Distancing Festival. Artists can contact Green and inquire about collaborating with another artist they’ve seen on the site, or have Green pair them with another artist of his choosing. There is no cost to the artists.

“For online art, I’ve become a matchmaker,” he joked. “I don’t want to be too instructive. So for the most part, I tell [the collaborators], ‘You two are brilliant artists. Go. Do whatever. I’m happy with anything you come up with.’”

Green’s matchmaking magic has recently connected a team of Canadian musicians with a dancer in Dar es Salaam, Tanzania. Barbara Johnston, a member of the Toronto-based composing team alongside Anika Johnson and Suzy Wilde, was contacted by Green and immediately thought the idea was “the most exciting thing possible in the world.” Once paired with Tanzanian dancer Tadhi Alawi, Johnston’s team got to work.

“Everybody was so excited to create this song and collaborate with the dancer in this way,” Johnston said. “We just wrote an email about what we felt the song was about, how we thought the themes could be expanded upon, how certain aspects of what's going on in the world can relate to what this song is about. And he wrote us back this beautiful email the next day. And we just began sharing emails back and forth, talking about our process, talking about the song and the movement to the song.”

The final product of the collaboration is a video showing Alawi dancing to Wild Heart, a song composed by Johnston and her team. It’s a partnership unlike any Johnston's been a part of, she said, but one she wants to explore more.

Johnston said she was amazed the nearly 8,000-mile distance between Tanzania and Toronto felt so small.

“It's just amazing how quickly we connected as collaborators without ever having met, and with being, you know, literally a world apart,” ” Johnston said. “All I want to do now is try to find ways to connect with people. And I feel that this is an opportunity to see beyond the barriers that exist and have existed, because we're in unknown land now. We're just trusting in the process. And it's kind of, you know, it's intimidating. But I'm excited for the adventure of it, and I'm really excited to see what comes out of it.” 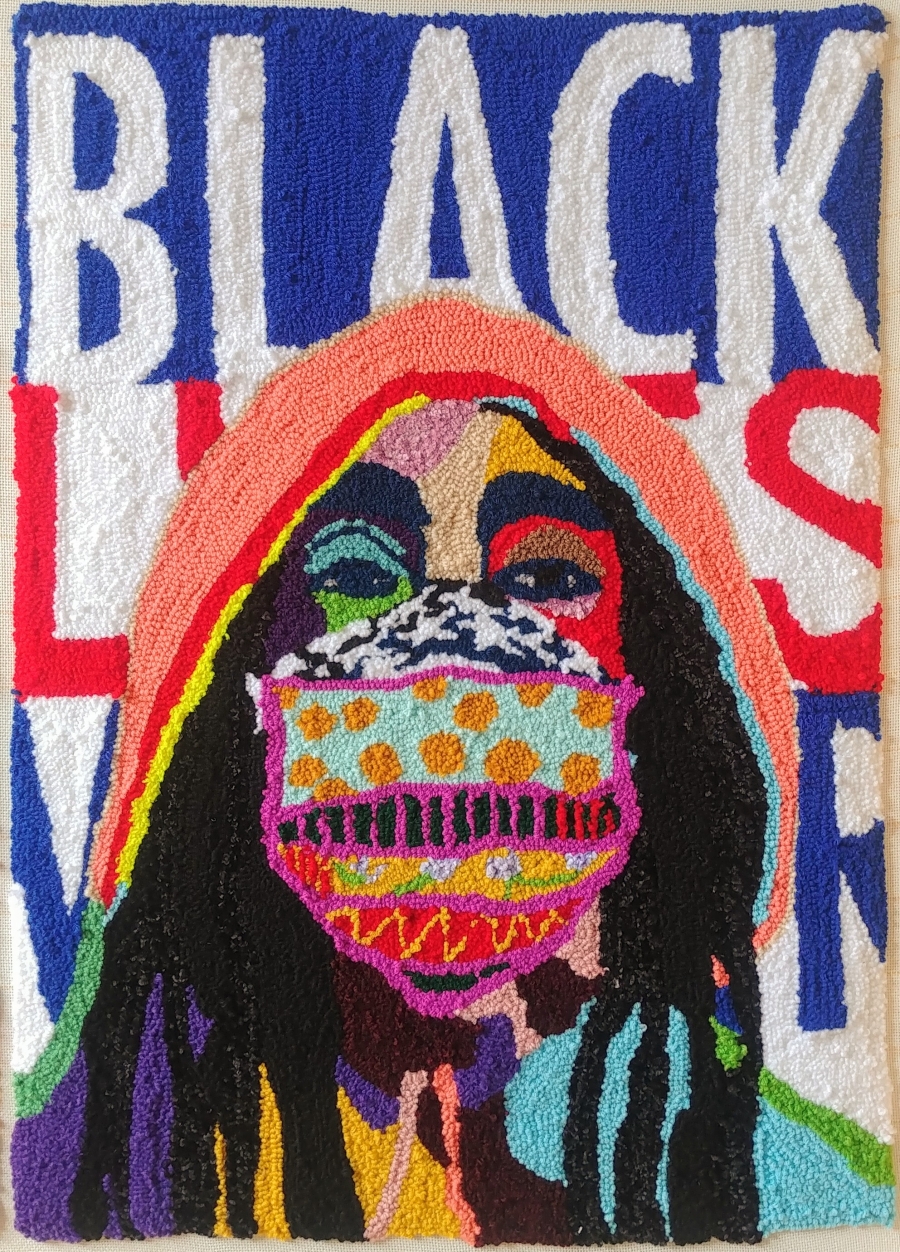 Simone Saunders, a visual artist based in Calgary, Canada, created this piece for the Long Distance Art series.

The Long Distance Art series lives online for now, with many artists working in their apartments and childhood homes instead of their studios and theaters. Though the past week has revealed glimpses of a post-lockdown world as some countries begin reopening businesses, public parks, and schools, experts suggest it will take years for the economy to return to what it once was. Theaters, museums and venues — reliant on crowds of people — are also among those expected to stay closed long after restaurants, schools, and small businesses open again.

But as venue doors remain closed, laptop computers remain open. Green said his aspirations for The Social Distancing Festival and The Long Distance Art series aren’t canceled — but they need funds to sustain themselves.

“A dream of mine is that there might be someone or an organization out there who sees that this is the artistic embodiment of connecting people across the world and global conversations about humanity and lived experiences,” Green said. “And they might say, ‘Hey, you know, that aligns really well with what we, as an organization, are doing. Why don't we put some money into this? Why don't we fund some of these artists or somehow buy one of the works?’”

This is “new territory,” Green said, and he isn’t sure how The Social Distancing Festival and the Long Distance Art series will evolve. But speaking his dreams into existence has worked so far. Green added: “Why stop now?”