Kevin Reid typically spends eight hours per day in uniform, five days per week, standing in the galleries at the Museum of Modern Art in New York City, keeping watch over the art.

Sometimes people ask him where to find the bathroom. But more often, they barely acknowledge him. It’s part of being a security guard, he said.

“Most people just come in here, ask us a question and just go,” he said. “You feel invisible.”

Visitors may not consider how those guards are often incredibly knowledgable about the art — and may even be artists themselves. In a new audio guide series for the museum called “Beyond the Uniform,” artist Chemi Rosado-Seijo turns the spotlight on Reid and nine other MoMA security guards. In a series of 20 audio essays, the guards each choose a piece of art and speak about it.

You can listen online even though the museum is closed as part of countrywide stay-at-home orders to stop the spread of the coronavirus.

Rosado-Seijo works in a field known as social practice, which is equal parts art and community activism. His projects usually feature marginalized communities.

When the museum’s education department asked him to come up with a project for MoMA, he said that he knew he wanted to work with security guards.

“Most of the guards are black or brown, as they call us. Puerto Ricans or Colombians or Dominicans,” he said. “They are the people who maintain or keep the structure of the museum together, but you’re not supposed to see them, in a way.”

And they don’t usually get asked about the art, even though they’re the ones who are living with it.

“A lot of the guards are artists themselves, too, and that’s a big reason why they work here.”

“A lot of the guards are artists themselves, too, and that’s a big reason why they work here,” he said.

Reid is a recording artist. He goes by the name LuxuReid and estimates he’s written more than 100 songs. He said the job at the MoMA was “an opportunity to be around art. And expand my horizons.” 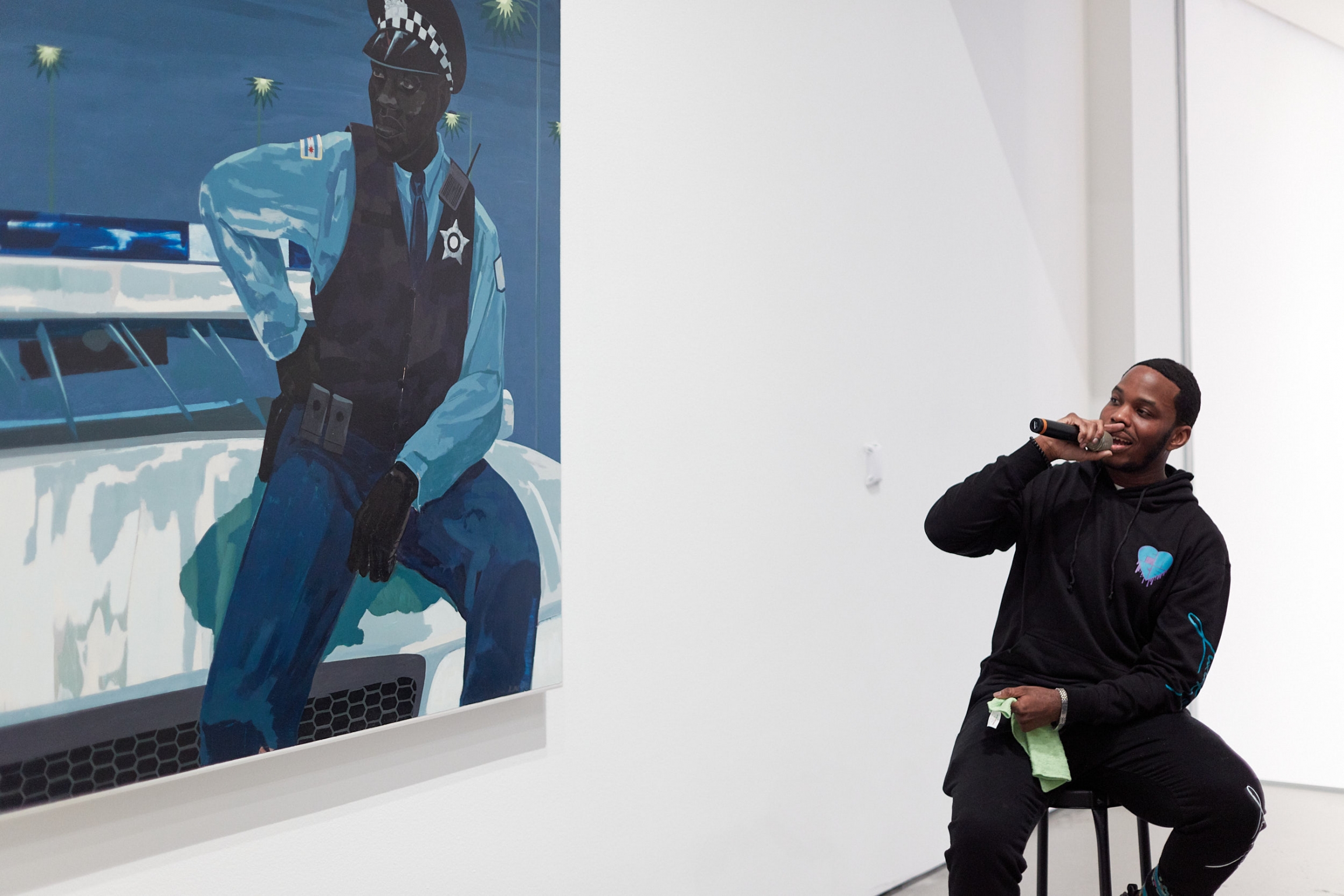 In the audio guide, security guard Kevin Reid explains his favorite work of art in the museum: "Untitled (policeman)" by Kerry James Marshall.

Reid even composed a rap for the audio guide. “Mr. Invisible doesn’t make sense to you, he raps. "People look through you but don’t see what’s in you.”

He was inspired by a 2015 painting called “Untitled (policeman)” by the African American artist Kerry James Marshall, which he also discusses in the guide. It’s a monumental portrait of a black police officer in uniform, sitting on the hood of his cruiser, staring off to the side.

“It’s a very provocative piece. ... It connects so much. Black Lives Matter. The senseless police shootings, injustice, prejudice. African Americans in the police force as well. It’s a lot to take in.”

“It’s a very provocative piece,” Reid says of the artwork. “It connects so much. Black Lives Matter. The senseless police shootings, injustice, prejudice. African Americans in the police force as well. It’s a lot to take in.”

Rabbila Konock explains that Vincent van Gogh’s "Starry Night,” which the artist painted during a stay in an asylum in the French countryside, reminds her of home. The night sky is roiling with swirling patterns. The stars, moon and planets glow in circles of yellow and white light. A sleepy little village lies beneath a turbulent sky. 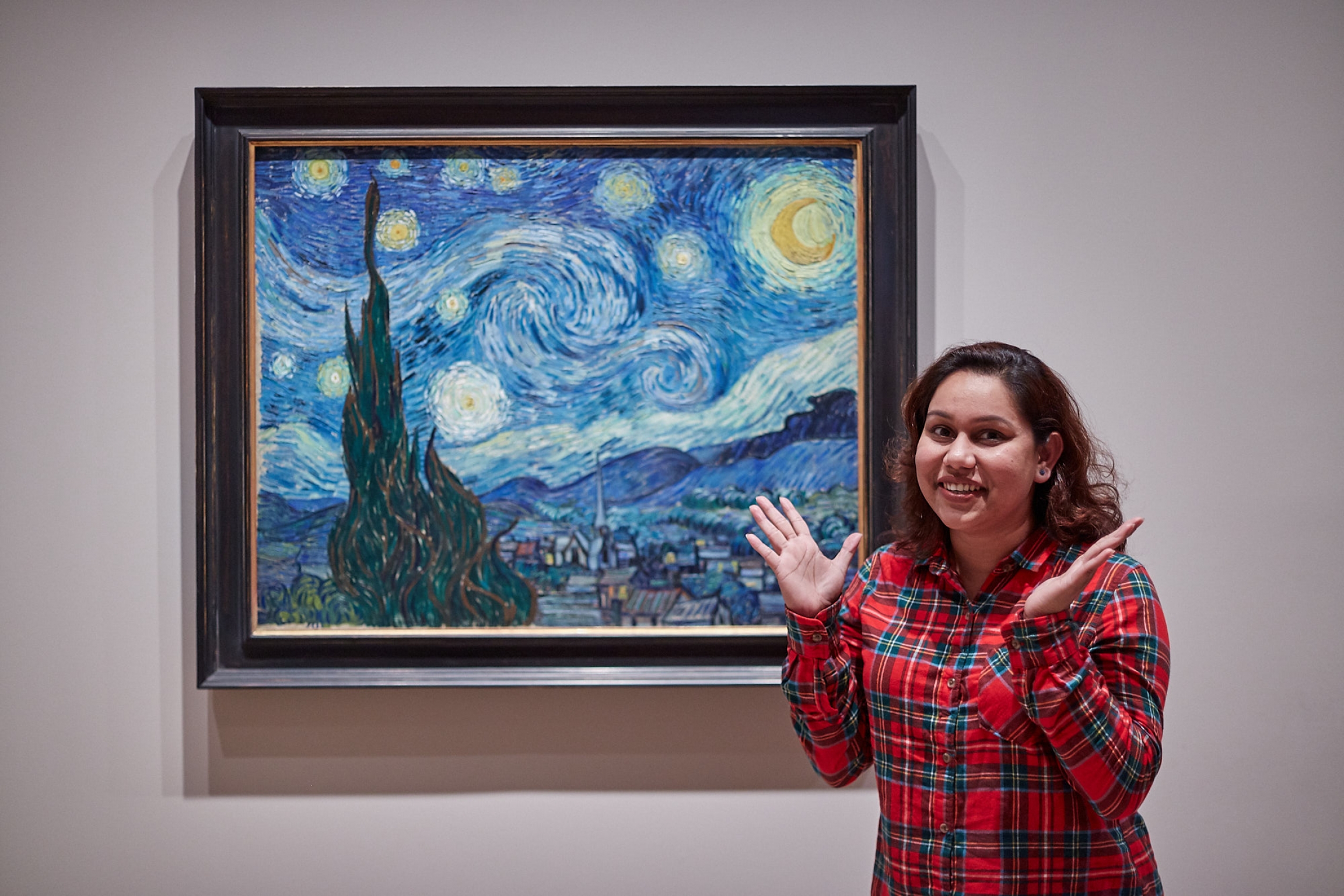 “I am originally from Bangladesh. My village is similar to this painting,” she chuckles as she explains on the guide. “The night is more alive than the day. I believe he created [this painting] in early morning, before [sunrise]. So sometimes when I have to decide something, I wake up that time, I look outside from the window and [think].”

Chemi Rosado-Seijo hopes this audio project will be empowering to anyone who listens — especially if they aren't art experts.

He says all too often, people will start talking about art and then censor themselves. They’ll say stuff like, “'I don’t know art! I shouldn’t be talking about it!”’ Rosado-Seijo said.

But he insists that art doesn’t have to be so intellectual and rarefied: “Your perspective is valid.”

Beyond the Uniform was conceived before the coronavirus outbreak and museum closure. Ideally, the listener would hear the audio while visiting the museum and standing in front of the works.

But Rosado-Seijo sees a silver lining.

“I actually don’t think [the coronavirus] changes the project at all,” he said. “If anything, it makes the message more urgent.”