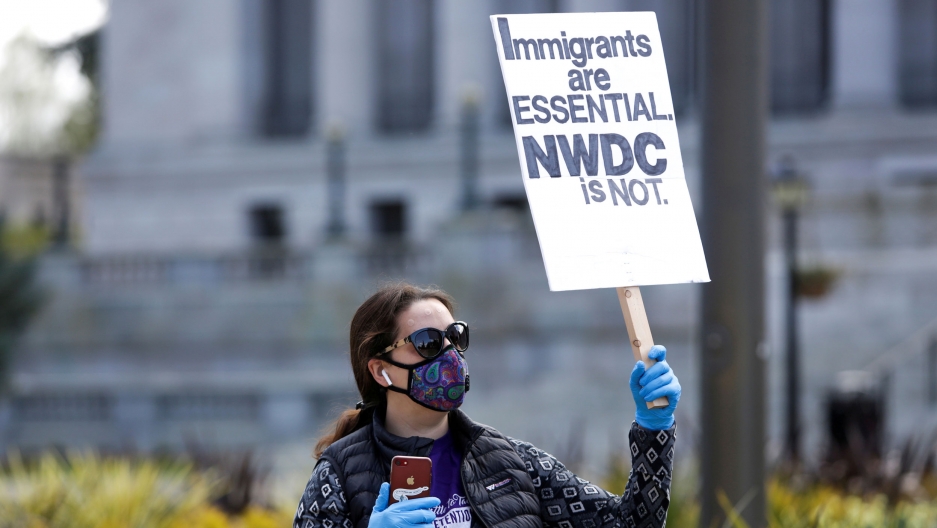 Tae Phoenix of Seattle holds a sign referring to the Northwest Detention Center in Tacoma, Washington, where immigrants held protests outside the Washington state capital with family and others concerned about the safety and health of inmates as efforts continue to slow the spread of the coronavirus disease (COVID-19) in Olympia, Washington, April 11, 2020.

Immigration to the US often suffers when the country faces a disaster, whether it is a disaster of war, economy or public health.

The novel coronavirus pandemic has already prompted the Trump administration to close borders and turn away asylum-seekers without sufficient processing. On Monday, President Donald Trump tweeted that he would suspend immigration to the US.

That statement was later clarified as a plan to temporarily halt giving foreigners permanent residence in the United States, which Trump claims will protect American workers during the coronavirus pandemic. The order, which is undergoing a legal review, would suspended the process to grant foreigners "green cards" for permanent residence, but a White House official who requested anonymity to discuss the process suggested the timeline for the order could be pushed back.

Critics say the president's announcement is a move to take advantage of the coronavirus crisis to implement a long-sought policy goal ahead of this year's presidential election. Business groups expressed opposition to Trump's plan on Tuesday, arguing it would only further depress the economy.

Many key details of Trump's planned executive order are still unknown, but crucially, while the order could block many people applying for permanent residence outside the United States, it is not clear how it would impact people already in the country seeking to become permanent residents. Trump said the order initially would last for 60 days and could be renewed for the same period or longer, and that a second immigration-focused order was under consideration.

The Washington-based Migration Policy Institute estimates that Trump's green card effort could prevent between 114,000 and 660,000 people securing permanent residence — if left in place for a year.

Erika Lee is an immigration history professor at the University of Minnesota and the author of "America for Americans: A History of Xenophobia in the United States." The World's Marco Werman spoke with Lee about how the US has responded with changes to immigration policy and increased xenophobia during times of war, economic hardship and disease throughout history.

Related: For centuries, migrants have been said to pose public health risks. They don't.

Marco Werman: Let's take a historical look at this. Your book, "America for Americans" is about the US' long history with xenophobia. You've seen the intersection of disease or other crises and nativism before in the past century. How does this current administration's response to this pandemic compare to another public health emergency, whether it's the 1918 flu or the response to the collapse of hygiene in New Orleans after Katrina?

Erika Lee: The 1918 flu pandemic is actually really fascinating to compare it to what's happening today. So first, we have to understand that, of course, during World War I, immigration was effectively halted due to the war and the end of passenger steamship travel. But even during the flu pandemic, in which the US lost 650,000 lives, the country didn't try to limit immigration. In fact, we still let in over 110,000 immigrants. And the Bureau of Immigration touted its kind treatment of sick immigrants.

So, take the immigration detention center in New Orleans, for example. There was an outbreak of flu epidemic there. There were 30 immigrants who were sick. But the Bureau of Immigration published a report in which it touted how it took care of its employees by requiring face masks, it sanitized the facilities, it put into place social distancing or isolation. And because of that treatment of immigrants, no lives were lost.

Erika, the stories right now of hate directed at Asians, Asian Americans — we're hearing stories of acid attacks. So personally, what has it's been like for you as someone whose grandfather arrived in this country during the Chinese Exclusion Act?

I think that the sense of worthiness, you know, is really being questioned for Chinese Americans and other Asian Americans, feeling like they're being suspected of bringing the virus and spreading the virus. And it takes its toll. And it's not just these horrific violent attacks, these physical attacks or the name calling or the social shunning. It's also just this internalized sense of, "Oh, I thought we belonged. But look how easily the tables can be turned on us." And I think there's a palpable sense of fear now that we're all supposed to wear masks out in public. There is a racialized image of an Asian person in a mask that is quite different than any other type of person wearing a medical mask.

Related: Decades after an immigration policy separated his family, a man searches for his ancestral village

I had not even thought about that mask aspect to all of it.

I certainly feel very self-conscious now wearing a mask outside.

Related: One legacy of the Chinese Exclusion Act? Secrecy.

You've also written, Erika, that Americans have the power to combat xenophobia. Obviously, as individuals, we all have that power. Aside from a person's vote, though, what would that take today? What would you like to see?

That's a really tough one. I think that so many of us feel disempowered because there are the legal challenges. Those have to continue. But many of us aren't skilled and tooled in doing that. We can support those organizations. We need to make sure that we're supporting immigrant serving organizations and, of course, vote. But as we're seeing xenophobia sort of spread out into the streets and into our neighborhoods and on our subways, one of the things that we can all do is stop it. We need to be those bystanders who don't just look away, but actually take action to intervene and to protect those who are vulnerable.