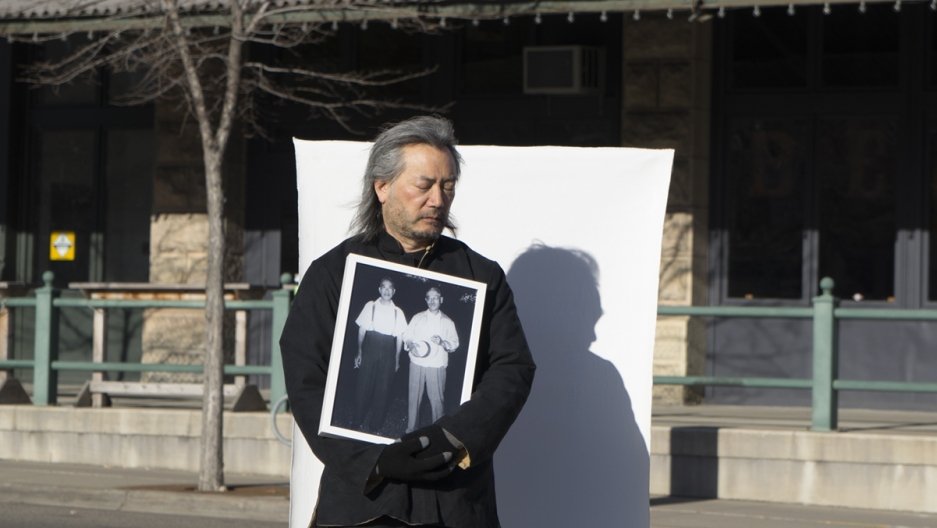 Steve Ozone's grandfather was a "paper son," one of many Chinese immigrants who circumvented discriminatory immigration laws by using fraudulent paperwork to gain entry to the US. He stands outside the Traffic Zone Center for Visual Arts in Minneapolis.

Photographer Wing Young Huie knew that his family came to Minnesota to start a new life. But why they moved is something he never knew growing up. Like, not at all.

Huie remembers going from his native Duluth to New York when he was in the middle of third grade in 1963. He didn’t understand why he had to leave his friends and the small Chinese restaurant his father started — only to move back to Minnesota a short while later. He also did not know why he suddenly had a new name. At that time, the Gee family became the Huie family.

It was only years later, while Huie was at the University of Minnesota studying to become a journalist, that he began asking questions.

These were the questions in Huie’s mind as he created an exhibit of huge portraits on outside walls of the History Theatre in St. Paul, that were to be displayed through April. Weather got in the way of those plans. The scale of the photos makes it impossible to miss the immigration stories of many local Chinese Americans.

"What is the legacy of hiding yourself and how is that passed along to your descendants?" he asks. 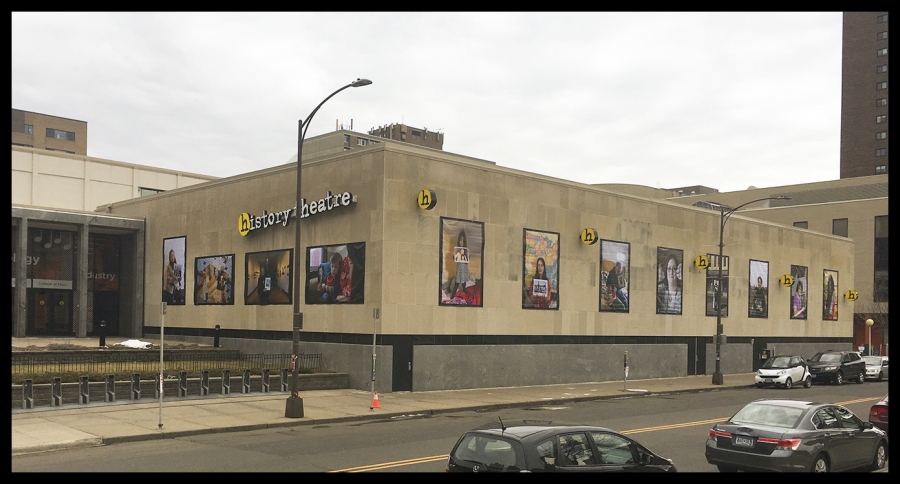 Wing Young Huie's portraits of people whose fathers were "paper sons" hang outside the History Theatre in St. Paul, Minnesota. It makes large and often hidden history in Chinese immigration to the US.

In photographing about a dozen participants, he discovered it’s not just his own family who is reluctant to tell the stories of how they became citizens of the US.

The portraits accompany a play called “The Paper Dreams of Harry Chin,” which dramatizes the true story of one man's journey from China during the era of Chinese exclusion and how he came to start a new life in Minnesota with a new identity and a new family. It's a story Huie was intimately familiar with because, it turns out, his father, too, was a “paper son,” someone who bought paperwork saying that they were the son or daughter of a natural-born US citizen in order to circumvent the harsh laws of the time.

Many of the people he photographed had never seen any story that reflected their own histories. It’s an uncomfortable experience for some. One woman told her husband, whose father was a paper son, about the play. He told her about his family’s fear of white strangers — census takers, salespeople. Even though her husband was a legal citizen, that fear of being found out as "illegals" was still part of his psyche.

"The anxiety was so ingrained that when she told her husband about the History Theatre inviting descendants to submit their family photos and stories for an interactive exhibit, his initial reflex was to say, 'No, I can't do that,'” says Huie. “That fear is passed down."

Erika Lee is the director of the Immigration History Research Center at the University of Minnesota. She has studied this issue for decades, and her grandfather was also a paper son. When scholars and community activists tried to connect with those who came to the US as paper sons or paper daughters, there was a huge stigma. After all, during Chinese exclusion from 1882 to 1943, people from every other country in the world were allowed into the US.

“All these other people were allowed to move around freely, except for this one group," says Lee.

Being exposed as a paper son would not just put you in danger, but also made other family members and those who sold you the paperwork vulnerable to deportation, as well. But, Lee says, the stigma has lessened because now, Chinese people are less vulnerable than other groups to deportation and the generation that experienced exclusion is dying out.

"We feel more free to share this history," says Lee. In 2010, the Oxford University Press published Lee and Judy Yung’s book “Angel Island: Immigrant Gateway to America,” which included stories of paper sons. Lee says her co-author had to turn people away who wanted to tell their stories of Chinese exclusion because she was getting too much interest. 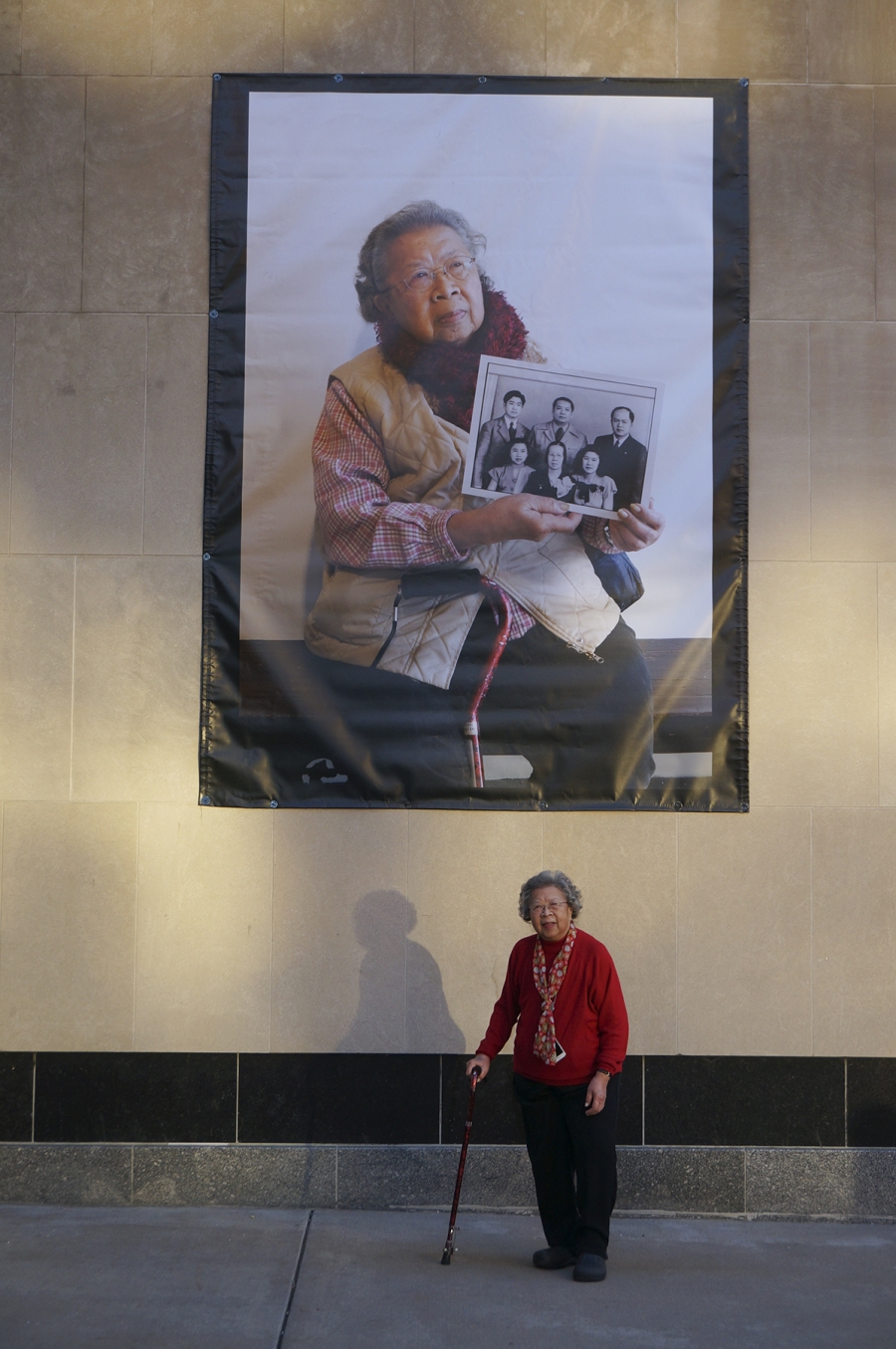 Oy Huie Anderson is one of the subjects who agreed to be photographed for Wing Young Huie's exhibit about Chinese immigrants who circumvented laws that restricted their immigration to the US. The portraits hung outside the History Theatre in downtown St. Paul, Minnesota.

The Chinese Exclusion Act was one of the first immigration orders that excluded a group of citizens by name. It left a legacy among Chinese Americans, like what happened to Harry Chin’s family, as dramatized in the History Theatre play.

Harry Chin came to St. Paul, Minnesota, with fraudulent papers in 1940. He worked at a Chinese restaurant and eventually fell in love with one of the waitresses. Harry's past life in China and new life in Minnesota collided.

"At first, you wouldn't think of family tragedy being the result of a law saying that Chinese people couldn't come here," says playwright Jessica Huang. "But then you see the ripple effect and the way that a man has to lie to two different groups of people in order to maintain an identity to continue working and supporting all of the people in his life."

Another story about the effects of Chinese exclusion: A new type of cuisine on the US-Mexico border

Huie's family history, too, was shrouded in secrecy. It was only when his father passed away in 1989 that he learned why his family temporarily moved to New York: It was to learn about a 1960s forgiveness program for paper sons and daughters. More than 13,000 people confessed to using fraudulent papers, far fewer than the number believed to have entered the US illegally. With that program, Huie's father became a legal citizen and changed the family's name back from Gee to Huie. To this day, Huie says he still doesn't know the whole story of how his father came to the United States, and his family still doesn't really talk about it.

Steve Ozone, who Huie photographed, has a grandfather who was a paper son. He says his mother did not tell him this history for 20 years. When he told her about the play, she flew up from Orlando to see it and that's the most they have ever discussed it.

Huie never talked to his father about being a paper son. He only asked questions about his life and his family — and that’s only after he became a journalist.

"It was then that I gave myself permission to even ask him questions," Huie says.

The play and Huie’s exhibit received a lot of reactions — people have called, left messages about the photos and participated in discussions after the shows. Many people are comparing the story of Harry Chin and their Minnesota neighbors to current immigration policy debates.

Lee says there hasn’t been a unified response from Chinese Americans about the current state of immigration simply because the community is so diverse. There are people who have been here for six generations, those who came yesterday and everything in between

“The ones who are active and responding absolutely feel the history of exclusion makes us uniquely qualified to speak out,” Lee says. “But there are also a diversity of opinions like there is a diversity of Chinese Americans.”

Also: Why one group of Chinese Americans opposes 'sanctuary' cities

"We've been here before," says Huang about today’s immigration policies. "We took steps as a country to exclude people by name ... so let's be mindful today as we try to legislate people's immigration status."

But keeping that history in mind still isn’t easy for everyone. There are still people who Huie found and asked to be part of his exhibit who said no. Six decades later, they are not ready to talk openly about their families’ histories.