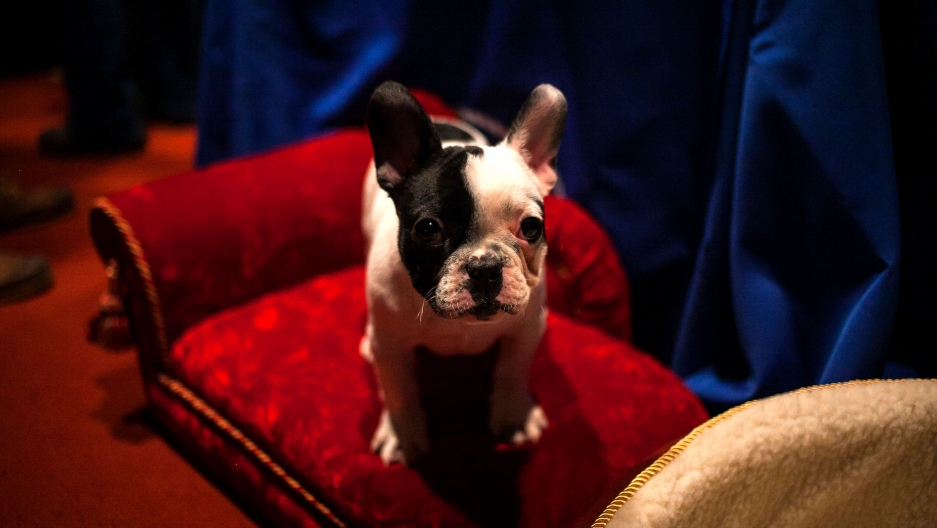 A French Bulldog puppy poses for a portrait at the American Kennel Club (AKC) in New York Jan. 31, 2014.

Many people follow a routine before leaving the house. Do you have your keys, wallet and phone? That’s the easy part. Saying goodbye to your furry friend and knowing he will be home alone for hours is much tougher.

Methods to ease your pup’s pang of loneliness may include leaving toys out, putting the television on or playing music. In a survey of 5,000 pet owners in five countries (US, UK, Australia, Italy, Spain and Sweden), digital music service Spotify said it found that 71% of pet owners played music for their pets when they left the house. The audio-streaming brand has now taken things one step further by launching a podcast designed to calm your canine when he is home alone, in response to owners’ requests and scientific studies that prove a connection between pets and humans.

Related: The emotional lives of cows

"My Dog's Favourite Podcast" speaks directly to your dog. Each of the two episodes is five hours long and includes classic soothing sounds such as waterfalls and gentle music. But what’s a podcast without a soothing, deep voice?

“You really are the best dog in the whole, wide world,” a deep voice booms in the podcast. “And [you’re] my very best friend.”

The podcast has a slew of offerings to entertain — and educate — your dog.

“I think you already know how much children love you. But did you know that you make them stronger, as well?” a voice asks. “It’s nothing short of amazing. When kids get to hang out with dogs like you, it helps reduce their risk of having respiratory problems, ear infections, [and] even gastroenteritis.”

"My Dog's Favourite Podcast" will also throw your dog a funny bone. “Which dogs have low, rough voices?” is followed by the chuckle-worthy answer: “Huskies.”

It’s clear Spotify didn’t skimp on this project. The star voices of the podcast are none other than English actors Ralph Ineson and Jessica Raine. Ineson — best known for his roles in Games of Thrones, Harry Potter, and the British version of The Office — is well-regarded for his deep voice and often narrates documentaries and commercials. While he said he “doesn’t usually play very loveable characters,” as a longtime dog lover, this job was too unique to pass up.

“I had never heard of [a dog podcast] before. And, if it was to take off, then yes, I’d be quite proud to be the original dog whisperer on podcasts,” Ineson said.

The English actor has two Great Danes and a French bulldog of his own, and said they seemed to like the new dog podcast. That didn’t surprise Ineson; he knew his own dogs could be comforted by his own voice. But he wasn’t sure about other people’s dogs.

"Turns out that, yes, my voice is apparently attractive to dogs."

“I wasn’t wholly convinced that other people’s dogs would like me talking to them, as it were,” he said. “I thought it would be more about the comforting sound of your owners’ voice. Turns out that, yes, my voice is apparently attractive to dogs.”

Related:  Are these animals spies? This one was behind bars.

The science of pet podcasts

Pet owners’ worries about their pets being lonely is a founded concern. Clive Wynne is a psychology professor at Arizona State University and is the author of "Dog is Love: Why and How Your Dog Loves You." He said dogs are emotionally impacted when left alone for long periods of time.

“I don’t mean to say that it isn’t reasonable to leave your dog alone some of the time,” Wynne said. “But I think if your life is structured that you inevitably have to leave your poor pooch alone for eight, nine, 10 hours a day on a regular basis, then I think people should think about restructuring their lives. Or, finding something else to keep their dog company.”

“What is remarkable about dogs — what is the really stunning thing about them — is their desire for social contact; their need to form strong bonds and be in company,” he said. “So they do suffer when we leave them alone for too long.”

If you don’t have a dog, fear not. Spotify also launched Spotify Pets, which is “a playlist for your pet based on music you love,” according to the audio streaming service. Users can select their type of pet from a dropdown menu that includes iguanas, cats, hamsters, dogs or birds, before telling Spotify more about their pets’ personalities. Is Baker the hamster shy? Friendly? Apathetic? After syncing those answers with the user’s personal music taste, an algorithm delivers a music playlist meant specifically for your pet.

“Eight in 10 people believe their pets like music, and around 46% of people feel that music is a stress reliever for their furry friends,” a Spotify press release reads, referring to results from the aforementioned 5,000 person study. “The results are interesting because it shows that, more often than not, humans also think about their pets’ emotional well-being, with 70% of animal parents considering the emotional wellness of their pets daily.”

Curated content for your pet is not new. Audible, the streaming book service, has collaborated with dog trainer Cesar Millan, known from the television series “Dog Whisperer” to recommend audiobooks for dogs. Amazon Prime offers Cat TV, a selection of movies showing birds and other mammals in nature.

The UK's Royal Society for the Prevention of Cruelty to Animals supports Spotify's dog podcast but warns nothing could "ever replace the company and presence" of a dog's owner. Wynne agrees.

“Gentle tones of voice [and] gentle sounds of music might help a little with a calming atmosphere,” he said. “But I think it would be misguided to imagine that that substitutes for actual company — for actually having another living being to interact with.”