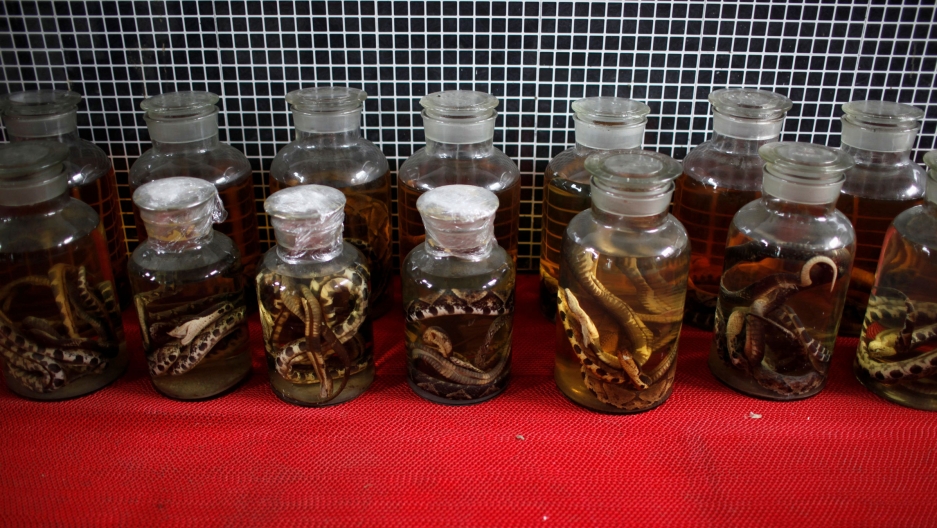 Dead snakes are preserved in jars at a snake farm in Zisiqiao village, Zhejiang province, China, on Feb. 22, 2013.

The Chinese government has instituted a ban on wildlife trade and consumption in an effort to limit the spread of the novel coronavirus after suspicions the virus originated at a now-shuttered live animal market in Wuhan, China.

“There are great dangers in the eating of wild animals, yet the wildlife food industry in our country is of a huge scale,” a spokesperson announced on China Global Television Network. “This poses a grave danger to the security of public health.”

Related: What to call this new coronavirus? Some cautionary tales.

While the decision from Beijing was welcomed by environmental conservationists who have long been asking for stricter restrictions on the industry, it was also met with skepticism.

The COVID-19 disease caused by the novel coronavirus has infected more than 80,000 people, killed more than 2,700 and now affects more than 30 countries. Scientists say the Wuhan market, which contained hundreds of exotic animals — both alive and dead — provided a perfect storm of conditions for the type of virus that can jump from animals to humans and spread.

“You have animals literally in cages being stacked on top of each other,” said Jonathan Epstein, disease ecologist with EcoHealth Alliance, a research non-profit focused on the relationship between human health and the environment. “The animals have an opportunity to be exposed to each other's excretions, feces or urine, which is often how viruses are shed. But also, you have people handling those animals and butchering those animals.”

Diverse species that live in close contact allows for the easy transmission of viruses between animals, Epstein said. The mixing of viruses can cause new strains to form, and those viruses can jump from animals to people.

The World Health Organization estimated that over 75% of the world’s emerging infectious diseases in the last 10 years came from animals. Similar to the current coronavirus outbreak, experts believe Ebola originated in bats and infect humans either directly or through other animal hosts.

Monday’s new regulations expand existing bans on the trade of rare and endangered species. All terrestrial exotic animals, both bred in captivity and caught in the wild, are now prohibited, according to the People’s Daily, a Chinese newspaper. The new rule closes a loophole in the existing regulation, which used to allow people to sell endangered animals if they were bred in captivity, said Li Zhang, a conservation biologist at Beijing Normal University.

“Some species — like the civet cat, the pangolin, the bamboo rat — they were captive-bred for their meat,” said Zhang. “With the new regulation, this captive breeding of wildlife will be banned. This is big progress.”

Aquatic animals and livestock are not included in the ban. The breeding of wild animals will be allowed for scientific purposes, but under strict regulations, according to the People’s Daily.

Related: Controlling the spread of coronavirus is key to stopping a 'true pandemic,' NIH head says

Xu said she believed the government may ease some restrictions and provide some exceptions for Chinese medicine and other specific animals in the coming months, but for now, the ban is near total.

“The Chinese government spent very little time developing this new law,” said Xu. “I don't think they considered all the issues in this ban and that they need to do more consulting.”

The ban on wild meat trade and consumption could cost the Chinese economy billions of dollars. Zhang said he hoped the government would follow the ban with poverty alleviation programs for the people who will lose employment at markets and farms as a result of the new rule.

The ban may have an outsized impact in rural places for ethnic minority groups who rely on hunting for their livelihoods, such as Oroquen in the far Northeast, who have long-standing boar hunting traditions.

A change of culture

Despite the economic impact, Zhang said he thought the ban would be popular among the public. The Society of Entrepreneurs and Ecology conducted an online survey — 90% of respondents said they would support a ban on wildlife consumption due to the epidemic, Zhang added.

In order to be effective, the new regulations need to be backed up by strict enforcement, said Xu — particularly in markets near China’s borders. Xu said it was possible that neighbouring countries with similar wild animal markets may follow China’s lead to avoid future outbreaks.

“They might consider how to learn from China, to strengthen and improve their laws,” said Xu. “This time, the virus is in China, but it could also take place in wet markets in other countries.”

On the other hand, the ban could backfire and spur black market trading, Epstein said.

“The risk here is that by outright banning wildlife trade, it will drive it underground and it will continue to happen in ways that are even more difficult to monitor or to regulate,” Epstein said. “So there may be viral spill-over in the future that goes undetected for even longer because it's happening secretly.”

Epstein said the ban would be most effective if it was accompanied by education for the public about the health risks of wild meat markets and their connection to the virus.

Although, education is not enough, he added. The challenge for the Chinese government and public health officials will be to reduce demand for wild animal meat. They need to change the culture, he said.

The final lines of the Chinese state media announcement of the ban on Monday seemed to offer a nudge in that direction.

“Underlying the enjoyment of eating these foods is the blood and tears of wild animals, and from beginning to end this trade exposes the barbaric tastes and values of the people who eat the animals,” a spokesperson said on Chinese state TV. “To refuse wildlife foods is to refuse barbarity. Giving wildlife a chance for survival will give ourselves a chance for survival."