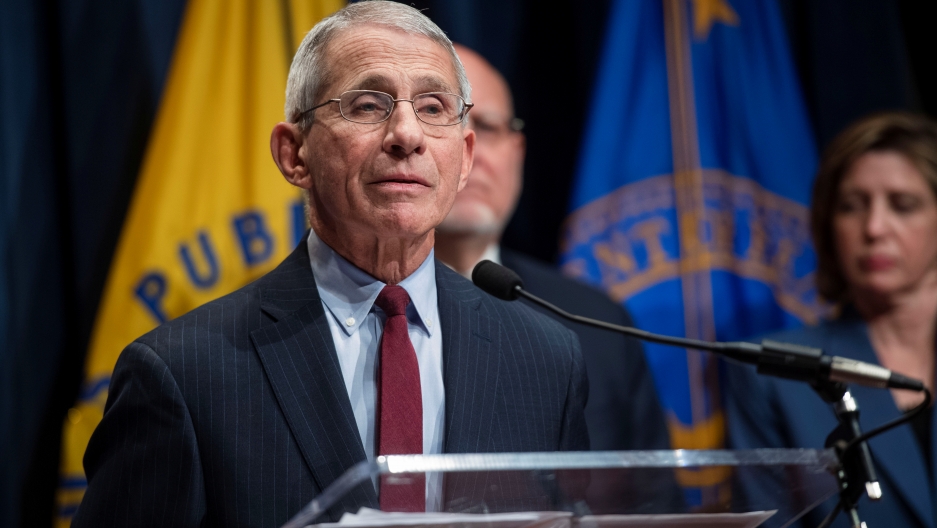 National Institute of Allergy and Infectious Diseases (NIAID) director Dr. Anthony Fauci speaks about the public health response to the outbreak of the coronavirus during a news conference at the Department of Health and Human Services (HHS) in Washington, DC, on Jan. 28, 2020.

The epicenter of the coronavirus outbreak is China, but officials in South Korea, Iran and Ukraine are also trying to manage the illness in their countries.

In South Korea, at least 204 cases are documented. Iran has at least 18 cases. There are no cases in Ukraine, but a group of Ukrainians returned from China, and as they were being bused to a quarantine center, their caravan was attacked. The Ukrainian president and health minister are trying to quell the fears of Ukrainians who don't want the virus to spread there.

At the World Health Organization in Geneva, director-general Tedros Adhanom Ghebreyesus said there is still a window of opportunity to contain the virus, but it's rapidly closing.

"This outbreak could go any direction. It could even be messy," Ghebreyesus said Tuesday. "What I'm saying is it's in our hands now."

One of the United States' top scientists is working to stop the coronavirus from becoming a global pandemic. The World spoke to Dr. Anthony Fauci, director of the National Institute of Allergy and Infectious Diseases and a member of the White House coronavirus task force. He says two questions are important to answer: Are there more cases out there that we don't know about? And can people who have no symptoms transmit the virus? The WHO delegation in China might be able to help answer those questions.

Related: What we know and don't know about COVID-19

"Well, the delegation is there," Fauci told The World's host Marco Werman. "It's a multinational delegation. And hopefully, they will accomplish the goal of both assisting the Chinese in their attempts to contain this, as well as to gain important information that would inform our own policies and our own strategy."

Marco Werman: So, you had mentioned earlier this month that you were hopeful that the WHO delegation would include US scientists. Is that the case, and why would that be valuable?

Dr. Anthony Fauci: Obviously, for example, our own CDC, our Centers for Disease Control and Prevention, have some of the best epidemiologists in the world. Here at the NIH, we do the fundamental, basic and clinical research to develop countermeasures in the form of diagnostics, therapeutics and vaccines. And so all of those things together, a combination of understanding the evolution of the outbreak in China, which obviously is the epicenter of what's going on, as well as to understand what the demands and needs are going to be with regard to countermeasures. It's always important, and I think contributory, to have people on the ground there. And that's the reason why we were pleased to see that the WHO delegation will include individuals from all groups.

You said that they will be there. So, does that mean that the CDC is currently there with the WHO delegation?

They are. They are there. See the issue — the reason why there's some hesitancy when people ask questions about the details are that — I mean, obviously, the Chinese are very sensitive about information getting out before they give it. So, we know what's going on. We are satisfied that we have the representation there. But the details of it, we would prefer to leave to the Chinese when they are asked, as opposed to our getting ahead of them. And that's the reason why when you ask direct questions about the details of the delegation, there's always some hesitancy because we want to be respectful of the Chinese.

Related: A California family went to China to renew their work visas. When coronavirus hit, they got stuck.

China has dozens of trials underway to test treatments — more than 80, I gather. What seems most promising, and have you been involved?

Yes. I mean, obviously, we're in communication with our colleagues in China and we're doing similar things like right here in the United States. For example, there are a number of compounds, usually drugs that have been developed for other virus infections that are being repurposed to determine if they work in the coronavirus infection. One of them is called remdesivir, which has been developed for other viral infections. It showed in the test tube and in an animal model to have some activity against coronaviruses, particularly the SARS virus. So now, the Chinese are doing a randomized controlled trial in China, looking at the effect of remdesivir compared to the standard of care alone without remdesivir. Parallel to this, as you may know, we evacuated several people from the Diamond Princess cruise ship in Yokohama Harbor in Japan. We brought them back to the United States and brought them to one of our containment hospitals in Omaha, Nebraska. They're there now. And we're going to institute this protocol for this drug remdesivir among those individuals. In fact, I think, we believe that we started it just last night. So hopefully, we'll get some good information from that.

I know you've been closely involved with the treatment development. Are you confident something will materialize?

Well, you've got to be careful about drugs that are treatment versus vaccine. We'll get an answer with drugs much more quickly than we get an answer with a vaccine. So, the answer to containing this outbreak now over the next several months to a year is not going to be a vaccine. What the answer will be, and hopefully will be successful, is standard, typical public health measures: identification, isolation, contact tracing and quarantine where appropriate.

So, you still see quarantines and even travel bans as most effective in stopping the spread of coronavirus?

Well, you know, travel bans as a permanent solution doesn't work. What you can do is that travel bans, when selectively used, can delay the influx of cases into other countries. We have 15 cases in the United States, 13 of which are travel-related and two of which are spouses of people who traveled. I believe, and I think everyone who's looking at the results now believes that if we had not put the travel restriction with China several weeks ago, we would have had many more cases of coronavirus in the United States. Although it's not any permanent solution — because once you have widespread disease throughout the world, travel bans don't work — it can sometimes, and I think this case is one example, be successful on a temporary basis to delay the influx of cases.

Related: What's life like for the residents of Wuhan?

China remains the epicenter of coronavirus. It looks like the numbers may be stabilizing, but now we're watching as South Korea scrambles to cope with the largest number of reported cases outside of China. How should we be viewing that? And do you think we'll continue to see hot spots emerge around the globe?

Well, I hope not, because, you know, whether or not we're going to be evolving into a true pandemic is going to be dependent on two things. One, the extent to which China can control the outbreak in their own country and the number of people who travel to other countries. The second important factor is how will other countries that now have travel-related cases, how will they contain the outbreak in their own country?

Because once you get robust, sustained, person-to-person transmission, then the situation could get worse, and we could evolve into a true pandemic.

As a member of the White House coronavirus task force, are you satisfied with the attention and focus the president is giving to this?

Oh, absolutely. I mean, the task force, we have a White House meeting every single day, sometimes every day, plus a couple of calls. And on several occasions, we've actually physically gone in and briefed the president himself in the Oval Office. So, the president is clearly very much engaged in this.