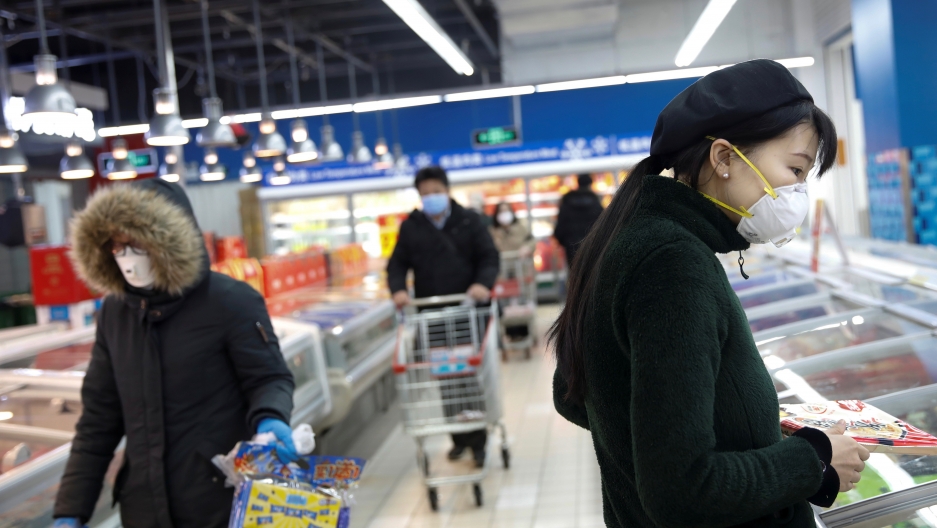 People wearing face masks look for products at a supermarket, as the country is hit by an outbreak of the new coronavirus, in Beijing, Feb. 19, 2020.

Avidan Lebenthal, aka the “Taco Mensch” started a food tour business in Mexico City last year that has quickly grown with the help of Airbnb Experiences, in which locals host various activities through the home-sharing platform.

Lebenthal’s enthusiasm for his job is infectious. “Here you get jalapeno stuffed, smoked marlin, battered, deep fried, beautiful, beautiful taco,” he exclaimed on a recent tour as customers bit into a Sonora-style fish taco at a local eatery.

But recently, COVID-19 has been on his mind. The spread of the new, novel coronavirus that began in Wuhan, China, in December — and has claimed more than 2,000 lives and infected more than 74,000 worldwide — poses major challenges not only to public health officials, but also companies like Lyft, Uber and Airbnb, which cater to users from all over the world.

Some companies are urging users and hosts to take cautionary measures to avoid the virus and its spread. But that has left a lot of open questions, and the platforms’ users are increasingly navigating a complex, public health crisis on their own.

The dynamic is an uncomfortable one as customers try to walk the line between caution and prejudice.

Lebenthal knows this firsthand. A few weeks ago, he got a message from Airbnb urging its users to “take necessary precautions to protect yourself when traveling or hosting.”

Around that time, Lebenthal got a new booking.

“I always look to see where my guests are from. And when I got a guest, on his bio it said that he is from South Korea. It did raise a red flag for a second,” Lebenthal said.

Related: A California family went to China to renew their work visas. Once coronavirus hit, they got stuck.

He reached out to Airbnb for guidance, and said the company told him he could start the cancellation process. Instead, Lebenthal wrote the customer and asked him about when he was last in Asia.

“It is my livelihood, but also my guests, they come here and they hire my services. They want a good time. And I want to give it to them. So, I didn’t want to cancel right off the bat.”

“It is my livelihood, but also my guests, they come here and they hire my services. They want a good time. And I want to give it to them. So, I didn’t want to cancel right off the bat,” Lebenthal said.

Still, he worried that his customer would be offended. 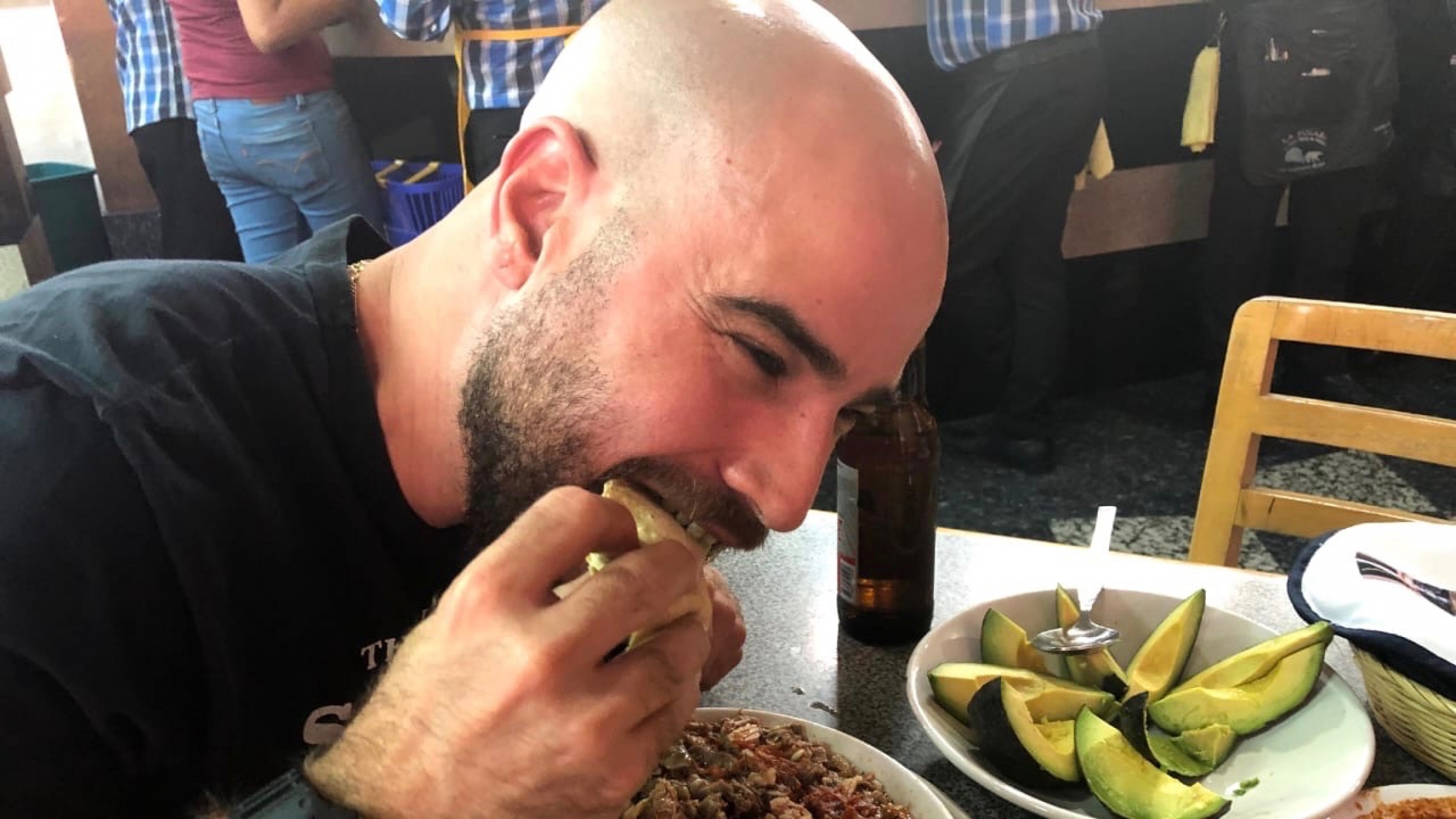 Avidan Lebenthal has a food tour business that has grown a lot over the past year thanks to Airbnb Experiences. But lately, it's been a challenge, he says, trying to figure out how to take precautions in light of COVID-19.

“I feel vulnerable in the sense that, you know, I get to interact with a lot of people every day, all day. And so, when you do have people traveling from all over, you just don’t know,” Lebenthal said.

Reached by Skype, the guest, Namho Kim, told The World that he was initially taken aback by Lebenthal’s question.

“I think for a split second I was like, ‘What the hell.’ But pretty quickly, I just put myself in his shoes and I texted him back saying, ‘I totally understand where he’s coming from.’ I already knew that being a tour guide is a pretty vulnerable job at this time.”

While Mexico doesn’t have any confirmed cases of coronavirus at this time, that could change, says Carlos del Rio, a professor of medicine and global health at Emory University in Atlanta.

“I think we will see cases. The question is when and how and how many,” he said.

Earlier this month, Uber suspended the accounts of hundreds of its users in Mexico City. They had taken rides with two Uber drivers who had transported a man who later tested positive for the coronavirus. Del Rio says suspending the accounts was a smart move, but he worries that vague memos urging caution can lead to discrimination.

He says that Airbnb’s cautionary note would’ve been written very differently if it had come from a public health expert.

“This is like [the company saying], ‘Don’t blame us if something happens,’ kind of thing,” del Rio said. “I think an advisory makes sense when it actually has real data. The advisory right now of [a] travel alert for the United States being, ‘No travel to China,’ OK, that’s pretty clear. That’s a clear statement that I can follow.”

“This is like [the company saying], ‘Don’t blame us if something happens,’ kind of thing,” del Rio said. “I think an advisory makes sense when it actually has real data. The advisory right now of [a] travel alert for the United States being, ‘No travel to China,’ OK, that’s pretty clear. That’s a clear statement that I can follow.”

Related: Semi-quarantined: Living with the coronavirus outbreak in Hong Kong

Airbnb, which has around 150 million users in more than 65,000 cities, said in a statement to The World that it prioritizes the safety of its guests and hosts. “We ask that all community members be mindful of respect and inclusion when interacting about this event,” the company said, referring to the spread of the coronavirus.

Airbnb has advised its hosts and guests to review their local government’s travel guidance and health advisories related to the outbreak and keep tabs on global guidance from the World Health Organization. The company also provided links to various countries’ individual travel and health advisories, but they are in the local languages.

In general, the company’s instructions leave room for interpretation. Maninder Marba, one of the tourists on Lebenthal’s food tour, said the coronavirus is a huge concern in Toronto, where she’s from. In addition to nonstop news coverage, she’s receiving work emails about it.

“Everyone is doing what they gotta do. I don’t know personally if I would go to Chinatown and have dim sum during this time. Everyone’s being cautious, and there’s a sense of, like, fear.”

“Everyone is doing what they gotta do. I don’t know personally if I would go to Chinatown and have dim sum during this time,” she said. “Everyone’s being cautious, and there’s a sense of, like, fear.”

As for Lebenthal, he kept his reservation with Kim, who says he had a great time on the tour.

But Lebenthal says the coronavirus has put him in a tough spot, balancing his own safety while also not discriminating.

“Each situation needs to be analyzed. You know, you got to be safe. And so, I reached out to Airbnb, and I reached out to the guest and we worked it out. I guess I’ll do the same [in the future.]”

These may be the kind of decisions more people could be making soon.