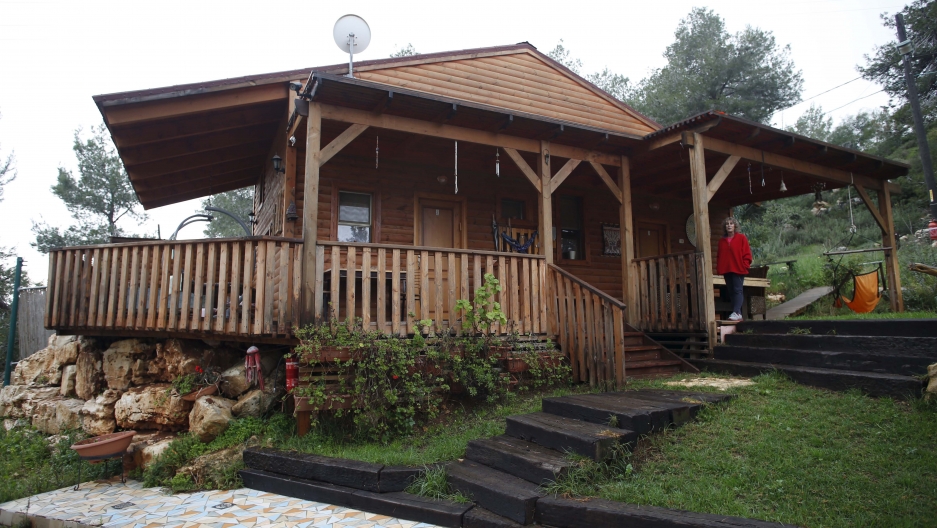 Gayle Wohlgemuth Atias stands at the entrance to her rental property listed on Airbnb in the Jewish West Bank settlement of Dolev February 23, 2016.

Vacation rental site Airbnb’s plan to delist rentals in Israeli settlements in the West Bank received swift legal blowback from Israeli activists when it was announced last November. On Tuesday, the company reversed that decision, prompting condemnation from Palestinian and human rights organizations.

Airbnb had not yet delisted any of the 200 or so homes in the occupied West Bank. On Tuesday, the company said in a statement it would not receive any profits from activity in the region. “Any profits generated for Airbnb … will be donated to nonprofit organizations dedicated to humanitarian aid that serve people in different parts of the world.”

Palestinian rights activists have said this move to donate funds is an attempt to “whitewash” the company’s complicity in the human rights violations in the West Bank.

Immediately after the November decision was announced, the company faced lawsuits in Israel and the US, accusing Airbnb of “outrageous discrimination” and “redlining,” according to Reuters.

Nitsana Darshan-Leitner, president of Shurat HaDin, a Tel Aviv-based law center, filed a suit against Airbnb in Delaware, where the company is incorporated, alleging that the company was violating US laws against housing discrimination. Twelve American citizens who own Airbnb-listed houses in the territory were among the plaintiffs.

“They did not delist Muslims or Christians or Palestinians that rent their houses and list their houses on Airbnb's site, but only the Jewish one. This is an act of discrimination,” Darshan-Leitner said.

However, it is possible that only Jewish owners would have been affected both because of the nature of the settlements and Israeli law, which severely restrict Palestinian movement.

“Palestinians cannot enter settlements — local Palestinians — except as laborers bearing special permits,” said Omar Shakir, Israel and Palestine director at Human Rights Watch. “So the people displaced from their homes where Airbnb currently has listings can't even themselves stay there under Israeli military law.”

"Even if the host him or herself wanted to have a Palestinian stay in a listing on their website ... they could not rent to that Palestinian under Israeli military law."

“Even if the host him or herself wanted to have a Palestinian stay in a listing on their website — and by the way it's not only local Palestinians, it could be a Palestinian American, for example, that has a US citizenship, but [also] Palestinian citizenship — they could not rent to that Palestinian under Israeli military law,” Shakir added.

Most world powers view Israel's construction of settlements on occupied land as a violation of international law, and Palestinians say it is wrong for companies to profit from them. Israel captured the West Bank in the 1967 Six-Day War.

“Quite simply, by brokering rentals on land stolen from Palestinians who cannot themselves stay there, Airbnb is directly complicit in the rights abuses that settlements entail. When you do business with the settlement, you're invariably benefiting from a system in which discrimination is at its core,” Shakir said. “Settlements are a war crime under international law and businesses who operate there makes settlements more sustainable and more economically viable.” 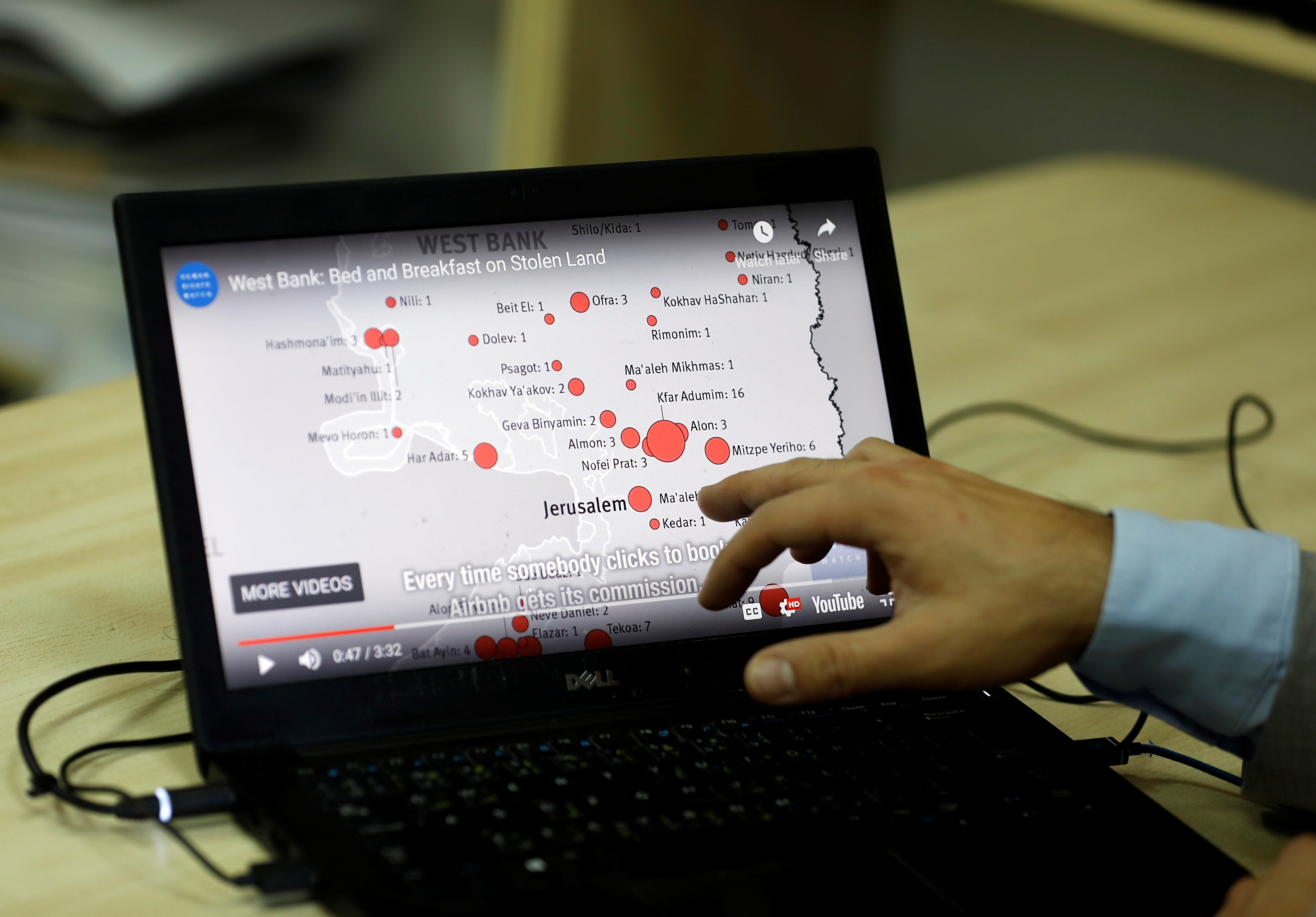 But Darshan-Leitner says Airbnb’s move was an “act of discrimination based on religion and it's prohibited according to the fair housing law in the United States.

"They also claim they are doing it because it's occupied territories but did not bother to delist houses from other areas in the world that is considered to be occupied, like northern Cyprus, like western Sahara. So, this is racism,” she said.

Shakir said, “Settlements are the only example in the entire world Human Rights Watch can find in which an Airbnb host must discriminate by national or ethnic origin.”

There are questions of how the boycott, divestment, sanctions — or BDS — movement factored into Airbnb’s initial decision to pull the listings.

“They were the one who initiated and drove Airbnb to discriminate against Jews,” Darshan-Leitner said. “The Human Rights Watch organization and other BDS organizations put tremendous pressure on Airbnb to delist the Jewish homes.”

“This is about a company's direct actions, which is completely distinct. It never was about BDS and any attempt to make it about BDS, I think, misconstrues the underlying dynamics of an issue that's about corporations and their human rights responsibilities under international law,” said Shakir.

More than half of US states have adopted laws to punish companies that boycott Israel.

“It’s a racist act, and it’s prohibited. Any American company that will collapse to the pressure of the various movements and will boycott Israel will be sued,” Darshan-Leitner said. “It was very important for us to bring this lawsuit against Airbnb just as an example that no company will think about boycotting Israel.”

Airbnb has denied that its West Bank delisting plan had targeted Israel in general. "Airbnb has never boycotted Israel, Israeli businesses, or the more than 20,000 Israeli hosts who are active on the Airbnb platform," the company statement said.

"It's not for American companies or American universities or anyone in the world to determine if the territories are occupied or not."

Darshan-Leitner also said that it’s not for outsiders to legislate the legality of settlements in the West Bank.

“It's not for American companies or American universities or anyone in the world to determine if the territories are occupied or not. If the Palestinians rights are violated lawfully or unlawfully or where the boundaries of the state of Israel should go. It's not for them. Because they don't live here. They don't experience what we Israelis do. They have never stepped foot in a settlement or in an Arab village. So, it's very easy to stay outside in Europe in the United States and scream BDS, BDS or Israeli apartheid state, without really knowing what's going on.”

Airbnb had initially filed a motion to dismiss the Delaware case that Darshan-Leitner led, but then asked to settle. She says the agreement is “very, very tight” and would prevent Airbnb from going back to their policy to delist West Bank rentals.

But Shakir says the settlement doesn’t mean their assessment of the situation has changed.

“They still have a policy around doing business in occupied territories and still find settlements to be afoul of their policy, including because they contribute to existing suffering. They have not disclaimed that position,” Shakir said. “All they've said is that they're not going to follow their own factual determination to its logical conclusion, which is to delist — instead donating profits essentially because they were bullied into it. This is not a reversal of their underlying assessment of the reality.”