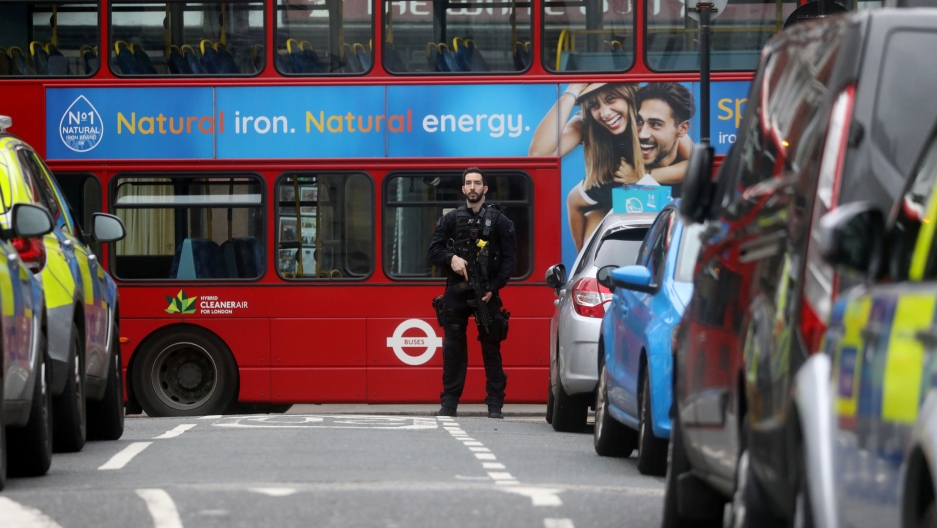 A police officer is seen near a site where a man was shot by armed officers in Streatham, south London, Britain, Feb. 2, 2020. The British government now wants to push through emergency legislation to change the law that allows prisoners convicted of terrorism to leave prison mid-way through their sentences.

Two attacks by convicted terrorists in a little more than two months in London have put the British government under pressure to tighten laws around early release from prison.

The incidents at London Bridge on Nov. 29 and Streatham in South London on Feb. 2 bore striking similarities. The perpetrators — both British-born — had served time in prison for terrorism offenses. Both men operated alone. They wore fake suicide vests and each used a knife to strike at passersby. And both had been released halfway through their prison terms under the automatic early release scheme.

The British government now wants to push through emergency legislation to change a law that allows prisoners convicted of terrorism to leave prison automatically midway through their sentences. The law was originally introduced to encourage rehabilitation and lower prison population numbers.

London Mayor Sadiq Khan believes the two recent attacks could have been prevented. He lives a few minutes from the latest incident in South London, where Sudesh Amman, who in 2018 pleaded guilty to several terrorism-related charges, stabbed two people with a knife before being shot dead by police. Khan said current laws mean judges don’t have the power to stop automatic early release of convicted terrorists.

“I've been frustrated for some time about changes in the law in 2012, which took away from judges the power they used to have to give a sentence to protect the public."

“I've been frustrated for some time about changes in the law in 2012, which took away from judges the power they used to have to give a sentence to protect the public. To make sure people weren't released unless we knew they were no longer a danger,” Khan said.

The London mayor isn’t alone in appealing for change. Within 24 hours of the second attack on Feb. 2, British Prime Minister Boris Johnson vowed to change the law. But for some who have worked in British prisons, new legislation is not enough. Former prison governor Ian Acheson said prisons have become perfect breeding grounds for radicalizing vulnerable men.

“You've got overcrowding, you've got indecent conditions," he said. "There's a lot of frustration and you've got a ready supply of highly credulous, violent young men coming into custody serving long sentences for non-terrorist-related crimes, who are in search of excitement and meaning.”

Deradicalization programs are offered in British prisons, but Acheson who is now senior adviser to the Counter Extremism Project, is not convinced they are effective.

“Unfortunately, there's plenty of anecdotal evidence that the most well known of the intervention programs, which is known as the Healthy Identity Intervention, doesn't seem to be working,” he said.

There will be some who agree with him. Usman Khan, who carried out the attack at London Bridge in November, killing two people, had completed a deradicalization program in prison.

But Rashad Ali, senior fellow at the Institute for Strategic Dialogue who has worked on deradicalization programs believe the public doesn’t get to hear about the success stories. Ali said he knows of numerous examples of terrorists involved in serious crimes who changed their thinking after taking part in these programs.

“We know individuals who have been released for many, many years now that were involved in very serious plots,” Ali said. “People who were connected to the 21/7 (London bombings) plot, who worked with the Unity Initiative, a deradicalization program and have completely changed their worldview.”

After radical Islamist-related attacks, there are often questions asked about whether Muslim leaders can play any role in countering radicalization. Acheson said respected Islamic scholars should be involved in some of the prison initiatives. Imam Mansoor Ahmad Clarke a leader with the Ahmadiyya Muslim community in Britain agrees.

“We should have programs within communities and also, of course, within prisons where peaceful religious leaders are going in and speaking to these individuals. So we can quite clearly explain that the teachings of the ideology, which these people seem to want to follow, actually have no room for extremism and radicalization.”

Clarke said he sees it as his job to educate people on the true teachings of Islam. The imam is unfazed by the finger of blame he often sees pointed at the Muslim community following these attacks.

“The whole situation is a blame game, right? I mean, unfortunately, when something like this happens, the immediate response in every corner of society is to pass the buck elsewhere.”

“The whole situation is a blame game, right? I mean, unfortunately, when something like this happens, the immediate response in every corner of society is to pass the buck elsewhere,” he said.

Imams within his community are happy to take on responsibility to help to tackle the problem, he said, and would go so far as to welcome the authorities into their mosques to scrutinize sermons.

“If there is nothing sinister being said, then there should be no reason to hide,” he added.

Counterterrorism practitioner Rashad Ali said reaching out to radicalized young people is immensely challenging because most already feel marginalized from the community. They are unlikely to listen to Islamic leaders who don’t espouse their world view.

“The truth is we're talking about people that are disenfranchised from the mainstream Islamic community or wider society."

“The truth is we're talking about people that are disenfranchised from the mainstream Islamic community or wider society," he said. "Radicalized people don't have that much confidence in these leaders. They have a political worldview that said, actually all these people are against us."

The government aims to pass the emergency legislation by the end of the month. Fifty prisoners who are currently entitled to early release may see their prison release date changed as a result. Swansea University Law Professor Stuart MacDonald said the legislation is likely to be challenged.

“I think it's highly likely to be subject to challenge on human rights ground in terms of the European Convention on Human Rights Article Seven," he said, referring to the article that says people may not be held guilty of criminal offenses for acts that were not considered criminal offenses under national or international offenses at the time they were committed. "Changing a person's sentence whilst they are in the process of serving that sentence, I think could be subject to challenge under that article.”

The next prisoner charged with terrorist-related offenses who is due for early release is Mohammed Zahir Khan. He was sentenced to four years in prison in 2018 for expressing support of ISIS. Khan’s release date is Feb. 28. The British government plans to put its new law in place the day before, Feb. 27.