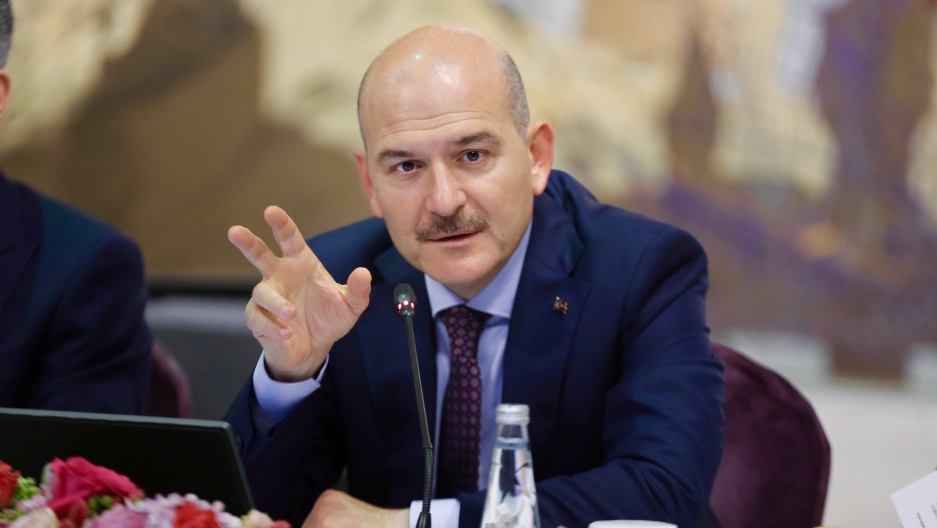 Turkish Interior Minister Süleyman Soylu said on Saturday that Turkey would send captured ISIS members back to their home countries, and he complained about European inaction on the matter.

"That is not acceptable to us. It's also irresponsible," he said of Europe leaving Turkey to deal with the prisoners alone. "We will send the captured Daesh members to their countries," he told reporters, using another name for ISIS.

Turkey has captured some escaped ISIS members in northeastern Syria over the last month after it launched a military incursion there.

Anne Speckhard, director of the International Center for the Study of Violent Extremism, spoke to Marco Werman about what these deportations may mean for the receiving countries.

Marco Werman: Can you tell us a little bit about your work with ISIS detainees and the governments involved?

Anne Speckhard: I've interviewed 211 ISIS fighters, most of them in prisons in Iraq and Syria. Most have given their permission to have their interview shared with their home government because they're hoping that their government will take them home and they know they're going to face prosecution. I've been working with a number of EU governments directly, and Australia, as well, to try to get these people repatriated. No country wants to take them back, particularly the male fighters, if they're not prosecuted and if they don't spend time in prison because they're afraid. They're afraid that they'll take them back and they'll end up in the streets and that they'll be a danger.

So, you're saying these countries from which these ISIS fighters came want fighters to stay in Turkey, to be tried there and serve time there?

Well, most of the EU countries don't want to take their ISIS prisoners back. They're worried that they can't successfully prosecute them. You know, it's hard to get evidence that will hold up in court from an active war zone. So, if they can't prosecute them and they're not confident that they can put them in prison and hopefully in some kind of rehabilitation program, they're terrified. Each country has their own concerns. France is really worried about the prison radicalization problem. Sweden has a problem because they don't have good counter-terrorism laws to be able to prosecute these people.

What about the United States? Is the US in a similar situation?

No, we're really lucky that we haven't had so many people resonate to the ISIS call. We can also be really proud that we have a robust legal system. So, we've taken everybody back. They are charged and they go through a legal proceeding.

I'm not sure it would make any difference in the prosecution ultimately, but you interviewed, as you said, 211 ISIS fighters. How many of those people express remorse for joining ISIS?

They don't express remorse as much as regret. A lot of them feel sorry for themselves. They bought into the utopian ISIS dream and they believed that ISIS was going to deliver something for them. So, they're a bit self-centered. They complain about themselves and they feel that ISIS already punished them, that they were un-Islamic, corrupt and brutal. When they understood that, they tried to get out. And some of them did. They paid smugglers and got turned over to the SDF or they got caught by ISIS and put in ISIS prison. We talked to women that were raped after they tried to escape. It's horrific. But they'd have to go through a rehabilitation program to get to that place where they also think about their victims and that they take responsibility that they were part of something, even if they were just a cog in a giant wheel.

Related: Who are Turkey's Saturday Mothers?

Turkey has criticized European countries in the past for refusing to take back their foreign nationals held in Turkish prisons. Why do you think that Turkey seems to be taking repatriation into its own hands now?

I think that the timing is really interesting. I think Turkey is flexing their muscles, telling Europe, "I've got these people and I can send them back anytime I want." Turkey has immense power over Europe because if Turkey wants to, they can allow all the refugees in Turkey to stream into Europe. The EU understands this and they'll probably play ball with whatever [Turkish President Recep Tayyip] Erdoğan demands. In The Guardian, it says there's 2,500 people to go back to Europe from Turkey. So this is a huge number of people for Europeans to suddenly have to deal with, and they're not ready.

Countries like Denmark and the UK have actually stripped people of their citizenship for involvement in terrorist groups. What happens to those people if they're sent back? Can you actually be prosecuted if you're technically stateless?

In the case of the UK, they've only stripped citizenship from people that had a second citizenship or that were eligible. EU countries shouldn't be stripping people and making them stateless, because if they are doing that, they're violating international law.

Related: Analysis: Trump's reversal in Syria was a play to keep his base intact

It sounds like there's quite a bit of confusion and unanswered questions about process and then that process is probably going to depend on individual countries. In the meantime, this repatriation, is it just going to be Turkey putting detainees on a plane and just sending them back? And then what?

I don't know. It may just be bluster for this week. Erdoğan's coming to meet with [US President Donald] Trump and this is a bonding point with Trump: "Look, I'm parroting your words. I'm saying the same thing to Europe. I'm standing up to Europe." But will he actually do mass deportations for 2,500 people, most of whom Turkey is claiming are from the EU? I don't know. And if he does, I imagine a country can refuse to land a plane. It remains to be seen.

The interview has been edited and condensed for clarity. Retuers contributed reporting.