Polyglot Susanna Zaraysky holds a printout of her brain scan from the Massachusetts Institute of Technology polyglot test.

There are more theories than facts about polyglots. Because internet lists of polyglots identify mainly men, there’s the belief that the male brain is more predisposed to multilingualism. Others believe that polyglots are disproportionately gay and/or left-handed.

These unfounded theories infuriate Ev Fedorenko, a cognitive neuroscientist at the Massachusetts Institute of Technology (MIT). Her lab is conducting a study seeking to dispel them and establish a basic understanding of how the polyglot brain works.

Related: The myth of the gendered brain

Recently, a polyglot named Susanna Zaraysky submitted to a two-hour session of tests inside an fMRI machine. Zaraysky speaks nine languages, most of them the usual suspects — French, Spanish, Portuguese, Russian — but also Ladino, the version of Spanish spoken by Jews who were expelled from Spain in the 15th century.

As far as the researchers are aware, this is the first modern-day study of the polyglot brain. Zaraysky is the study’s 23rd participant, and she’s different from many other polyglots. She learns mainly through conversation and singing. She says many of the male polyglots she knows approach new languages differently.

“You give them a grammar book, and they just absorb it. I would be bored out of my mind if I had to do that.”

“You give them a grammar book, and they just absorb it,” Zaraysky said. “I would be bored out of my mind if I had to do that.”

This is part of the problem in studying polyglots. Is the brain functioning the same way for textbook learners as it is for someone like Zaraysky, who learns through conversation and singing songs?

Scientists have been trying to figure that out for nearly a century.

Language writer Michael Erard has traced that history in his book, “Babel No More.” Erard spoke with German neuroscientists who studied the preserved brain of Emil Krebs, a German diplomat who died in 1930. Krebs claimed to speak 68 languages.

A recent analysis of Krebs’ brain found some anomalies: denser cell structures in certain unexpected regions. But the researchers couldn’t be certain about the timeline.

“Was there something about Krebs’ brain that preceded his exposure to any of those languages?” Erard raised. Something that “would have allowed him to build those structures faster?”

Related: Plants can tell time even without a brain — here's how

In other words, was Krebs born with a predisposition for multilingualism, or did that develop that over time?

“You can’t surmise that from the slices of [Krebs’] brain that I was looking at,” Erard said.

This is why the MIT study of living polyglot brains offers more promise.

Inside the fMRI machine, Zaraysky has earbuds on and is being bombarded with taped voices. At times, she hears a language she understands well; at other times, researchers play her clips of languages she partially understands; they also play clips of languages they are pretty sure she doesn’t understand at all. 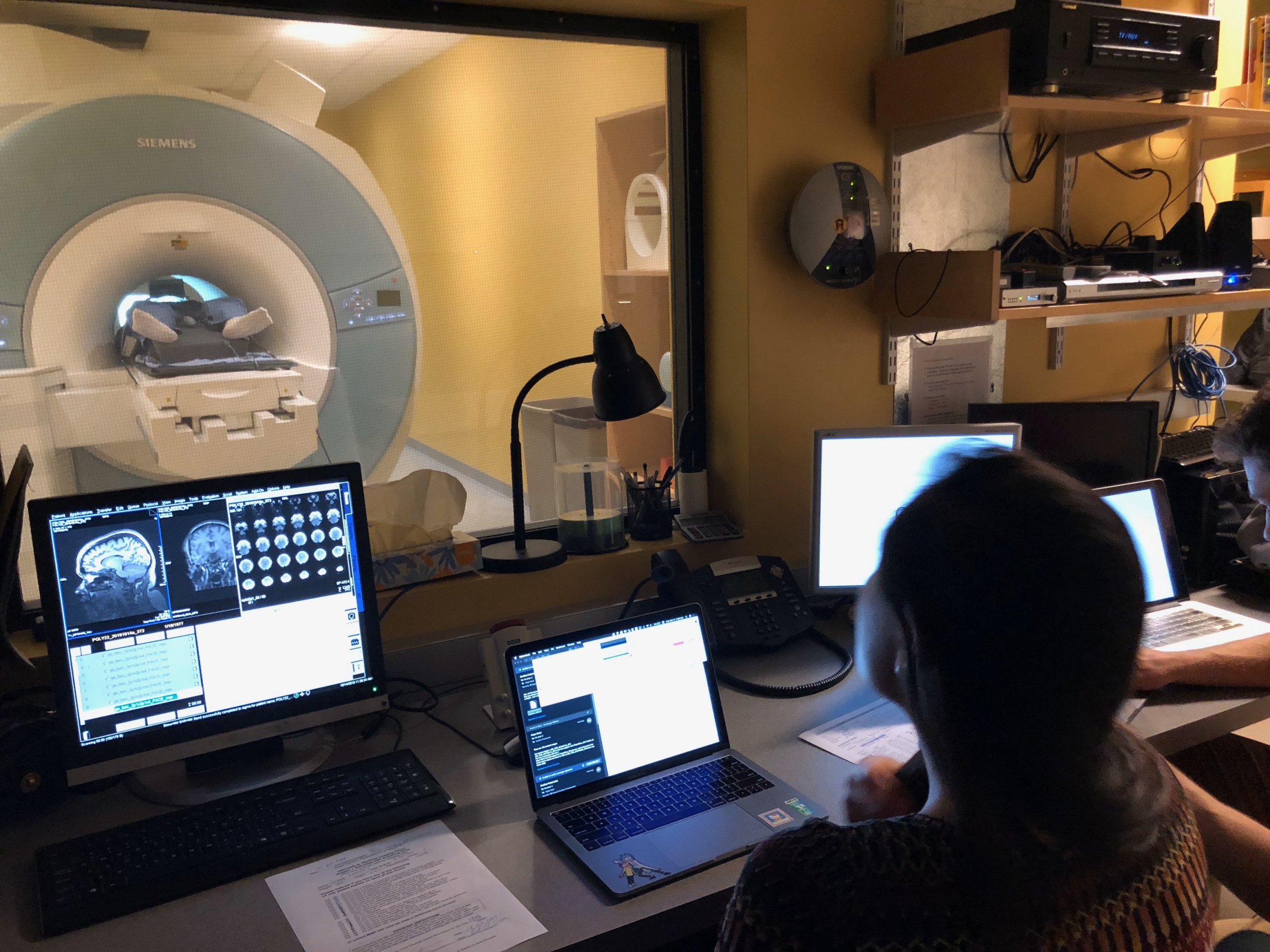 From the lab's control room, lab manager Hope Kean is shown at the controls with Susanna Zaraysky in the fMRI.

All the while, technicians scan her brain and monitor blood flow, which tells them which regions are most active at any given moment.

Results so far have been on the face of it, counterintuitive, says lab director Fedorenko. The control group here are monolinguals, people who only speak one language. For them, the regions of the brain that are associated with language appear quite large on activation maps.

“But for the polyglots,” Fedorenko said, “it looked like it was way on the end of a continuum where these regions were small.”

In other words, the polyglots were less — not more — engaged.

Related: How do our brains react to drugs? A neuroscientist explains.

“That seemed to be a real finding which then we started interpreting,” Fedorenko said.  “The most obvious, plausible interpretation is in terms of efficiency.”

It appears that the polyglot brains just don’t have to work as hard. They don’t require a sudden rush of blood to process language. 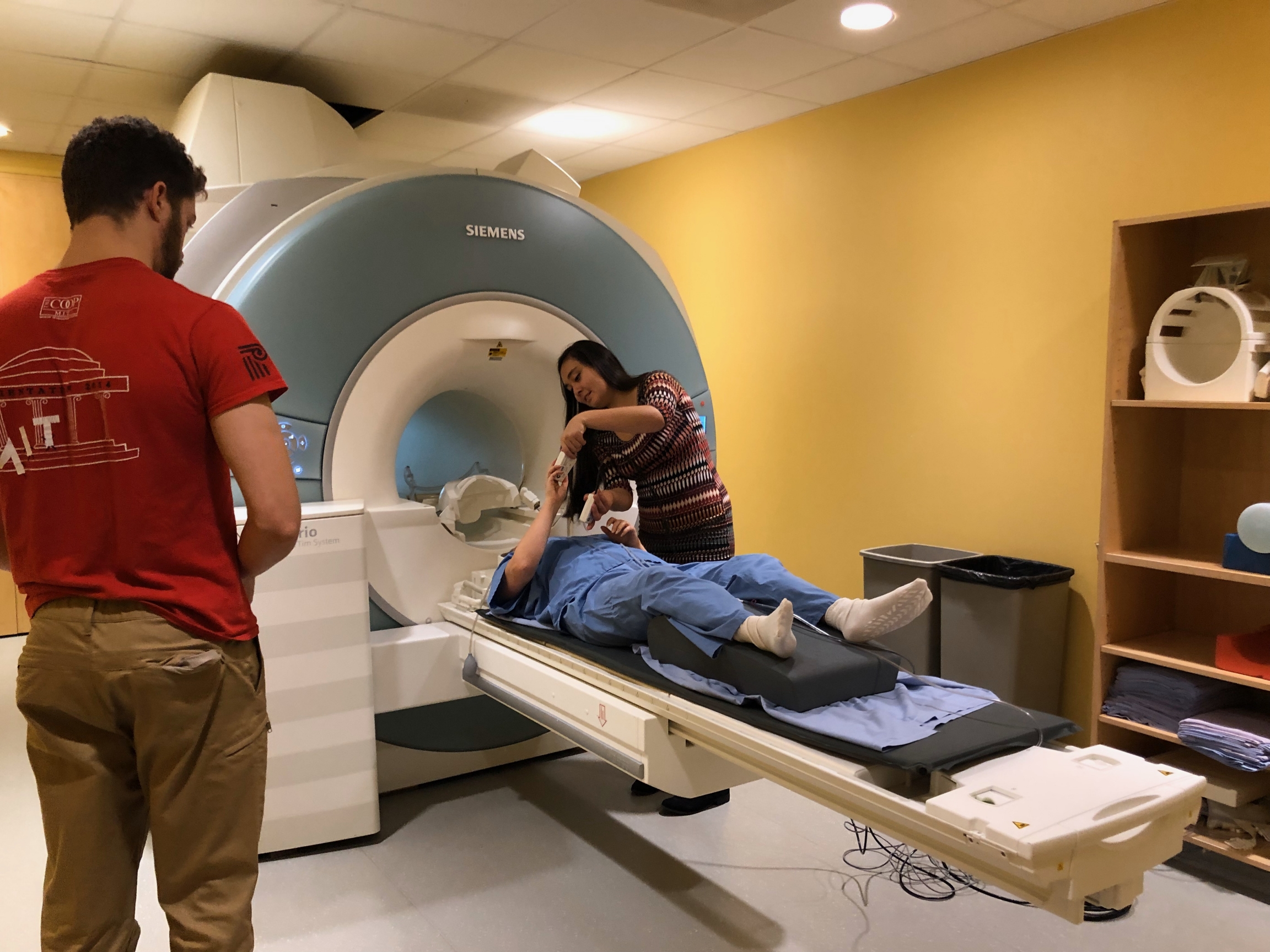 Two staff members are prepping Susanna Zaraysky ahead of her brain scan.

But this isn’t a longitudinal study, so researchers can’t fully answer the question of whether polyglots were born with this efficiency or developed it over time. It’s not a genetic study either, so we don’t know if any of these traits are hereditary. However, Fedorenko suspects that polyglots are far from brilliant superhumans, just people who blend talent with extreme dedication.

“Most brains can find ways to get good at things — that hard work will often get you a long way. I think brilliance is often overrated.”

“Most brains can find ways to get good at things — that hard work will often get you a long way,” she said. “I think brilliance is often overrated.”

Related: Why your brain never runs out of problems to find

Which comes as a relief to the rest of us. It’s nice to know that learning languages doesn’t necessarily require you to possess a superpower.

Patrick Cox is co-host of Subtitle, a podcast about languages and the people who speak them.