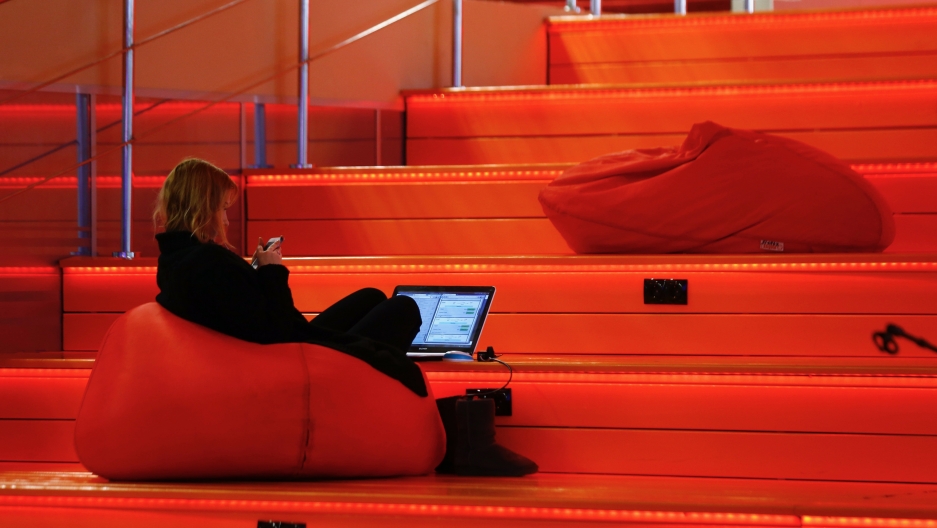 A woman with a laptop is seen in Hi-Tech Park Belarus building in Minsk, Belarus, March 17, 2016.

Men and women are different — so different that we might as well be from different planets. People often suggest that women are more in tune with emotions, whereas men are better at analytical things. The numbers themselves can seem convincing — according to the Bureau of Labor Statistics, women made up fewer than 20% of employees in tech sector jobs in 2018. And if the sexes are so different, their brains must be too. Right?

Well, maybe not. There is more to the story than just numbers, according to Gina Rippon, a neuroscientist at Aston University in Birmingham, England, and author of “Gender and Our Brains.” According to Rippon, the myth of gender differences in the brain — which has existed for hundreds of years — has recently been reinforced with the advent of brain imaging technology. But, she says, people have read far too much into brain scans, and the research that has been done using them.

“People were peddling stories about male and female brains because it seemed to resonate with what people wanted to hear, that mens’ brains are different than females’ brains.”

“People were peddling stories about male and female brains because it seemed to resonate with what people wanted to hear, that mens’ brains are different than females’ brains,” Rippon said.

Related: Will the next wave of humanoid robots make our lives better — or steal our jobs?

Exaggerated stories of sex differences were rampant during the years after brain imaging was developed, according to Rippon. Leonard Sax, the author of a popular book called “Why Gender Matters,” said on NBC’s “Today Show,” that one study found that female newborn babies prefer looking at faces, while male newborns responded to mobiles. Sax claimed that this showed females were programmed to detect emotion, while males were hardwired to focus on motion.

But according to Rippon, Sax ignored the data in favor of the catchy generalization. In reality, the study saw both male and female babies respond to both the human face and the mobile. Even more shockingly, Rippon said, Sax ignored the large number of babies who paid no attention to either. And along with misrepresenting the data, Rippon said, Sax’s portrayal of the study fundamentally misunderstood how the brain works.

“The use of the term hardwired is also something that is a bit of a red flag when people start talking about [the brain],” Rippon said. “It is actually very flexible and plastic throughout our lives, not just in young children while they’re growing. So, our brains do change according to the experiences we have, or even the attitudes we encounter.”

Related: How do our brains react to drugs? A former addict turned neuroscientist explains.

Looking for differences between the sexes is a statistical wild goose chase. According to Rippon, most differences between genders are much smaller than the differences among them. In other words, there is much more variation within the “boy” or “girl” group than there are between boys and girls.

But what about the statistics of men and women in STEM or other fields, like K-12 education? The answer is not in our heads, but in our surroundings, Rippon said.

“I couldn’t look at a scan of a man’s brain and say ‘oh that’s a man.’” Rippon said. Instead, she said, we need to be paying more attention to the social cues children are getting.

From the moment they are born, children begin to understand cultural structures and categories, according to Rippon. By the time they are 2 years old, she said, children have absorbed lessons about gender roles, and act accordingly to fit in. Just being open to your son taking ballet lessons, or having your daughter playing with trucks, cannot counteract the world around you, Rippon explained.

Related: Why your brain never runs out of problems to find

According to one study, Rippon said, even when parents were accepting of whatever their children wanted to do, over 90% of boys thought their parents would disapprove of them doing things like playing with dolls, dressing up, or other play behaviors typically associated with girls.

“You might think you’re being gender neutral, but children are pretty keen. They pick up messages rather quickly,” Rippon said. “We really need to look at the data more carefully and understand how powerful social influences are.”

All this does not mean that differences between the sexes should be completely ignored, however. Many diseases, Rippon said, like Alzheimer’s and Parkinson's, as well as afflictions like depression and self-harm differ between sexes, and need more research to be fully understood.

Related: This is your brain on improv