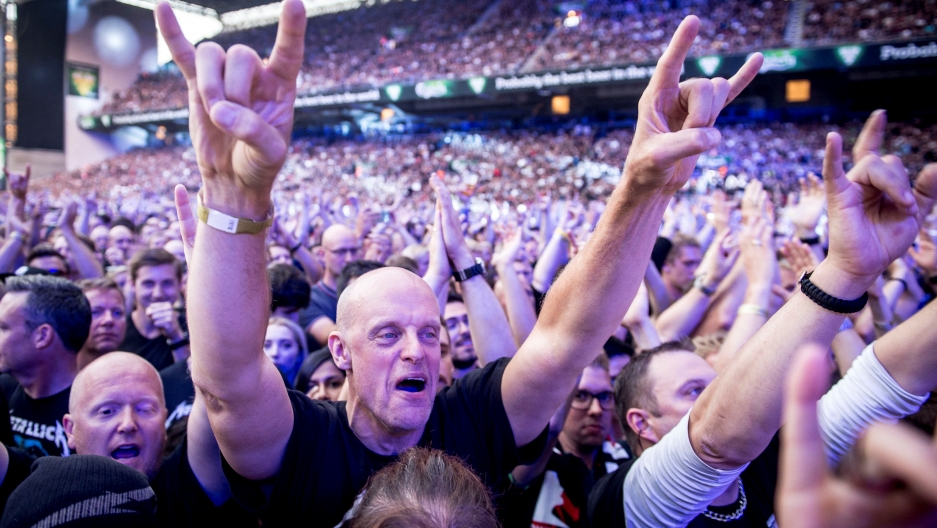 The crowd reacts during Metallica's concert at Parken Stadium in Copenhagen, Denmark, July 11, 2019. Loud noises, such as at concerts, can have a lasting impact on hearing.

Right now, there’s a good chance you’re listening to something. Whether it’s music, a nearby conversation, a plane overhead, the wind outside, or the hum of your computer, we’re essentially never in silence.

According to David Owen, a staff writer at The New Yorker and the author of “Volume Control: Hearing in a Deafening World,” there’s a huge cost to all that ambient noise: our health. From low birth weight in newborns to diabetes, Owen said there are multiple health effects of being constantly awash in sound.

“Measurable years of life are lost to exposure to high levels of sound,” he said.

Our ears were created out of a need to collect and process auditory input from the world around us, but, for most of human history those sounds were things like footsteps on dry leaves or thunder in the distance. According to Owen, it’s what humanity has invented since that has proved problematic for our ears.

“I think the big change is when we started pounding on metal,” Owen said. “The first occupational hearing loss was probably suffered by people like tinsmiths and silversmiths and ironmongers and church bell ringers — [jobs that included] these high-frequency, very loud sounds made by striking metal.”

Even if some of these jobs have disappeared from modern society, high-volume jobs and the risks that come with them haven’t. Construction workers, farmers and military personnel all suffer hearing loss at high levels. In fact, tinnitus (a ringing in the ear) and hearing loss are the number one and number two service-related health conditions suffered by veterans. But even working at an office job is enough to put you at risk.

“People who work in open offices undergo stresses that people who have their own little, quiet studies do not,” Owen said. “And they can show up in all sorts of ways in health effects. Insomnia is a place where it commonly occurs.”

Even if you were to quit your job to protect your ears, you would still need to deal with the sounds of day-to-day life. Taking the subway, driving past construction, mowing the lawn, or doing any of the many noisy things that make up modern life expose us to potentially damaging sound levels.

Modern medicine is working to reverse hearing loss, but, currently, there’s no undoing hearing loss once it happens. There are devices on the market like cochlear implants that have been used to successfully restore or improve hearing in hundreds of thousands of people. However, no solution is clear cut and these implants have something of a controversial history in the deaf and hard of hearing community. Some praise them as “medical miracles,” while others worry that they’re being hailed as a cure for something that doesn’t need curing.

What is clear, however, is that our ears are highly sensitive tools, and it’s not in our best interest to take them for granted.

“The ear is an amazing piece of equipment,” Owen remarked. “And there were hearing researchers that I spoke with who said, ‘The more I’ve learned about this, the more I’m amazed that it works.’ And I think there is that astonishment,” he explained. “It’s not that [our ears] cease to seem magical to them — it seems even more magical once they start to unpack it … and yet we’re incredibly careless with them.”

In the end, maybe it’s time to invest in some earplugs.

Sarah Leeson is an associate producer with Innovation Hub.